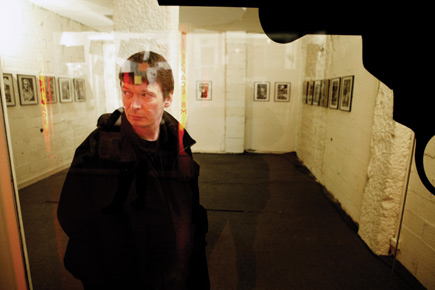 
Ian Rankin studied to be a professor of English and says he was initially appalled to find his books on the crime fiction shelves. He’d pick them up and stack them in the Scottish fiction section. Now, though, he doesn’t bother. And neither should he. His cynical, malt-loving Inspector Rebus has millions of fans all over, not least among them Prakash Karat and Sharmila Tagore. He will be on a whirlwind tour of five Indian cities this week as part of the British Council’s Lit Sutra programme. An interview:

Q Arthur Conan Doyle grew up in Edinburgh and says he based the character of Sherlock Holmes on one of his teachers there. Then, there’s you. And now, Alexander McCall Smith. Is there something in the Edinburgh air that produces great crime fiction writers?

A Edinburgh is a very inspiring city. It has extraordinary architecture and geology. Very few people know that the castle in the middle of the city sits on a volcano, now dormant. So there are things like that, surprises. When I walk around the city, I get ideas, I see stories.

Q Did you watch the Sherlock Holmes movie?

A I did and I thought it was a lot of fun, actually. It’s a terrific action thriller, loosely based on Conan Doyle’s character. I know they’re saying it’s not authentic, but I’m not precious on being true to literary characters. You need to be adventurous for a film, I think.

A Ha ha, I did. If you read the books, you don’t get that sense at all. I mean, Holmes and Watson are always together, but there was this culture of male bonding at the time. And Watson goes home to his wife every night. I think Robert Downey Jr was just having some fun.

Q Which brings me to a question I’ve been wanting to ask for a long time. Why are detectives always single?

A Sherlock Holmes, Poirot, Miss Marple, your Inspector Rebus, even this Icelandic detective Erlendur created by Arnaldur Inridason. (And Feluda fans will admit that he is astoundingly uninterested in sex.)

Well, personally speaking, it’s a lot easier to construct a plot if the detective doesn’t have a family to go back to, kids to pick up, an anniversary to remember. If your main character is in a stable relationship, you have to be aware of that all through. Kids’ birthday parties, grocery shopping, driving out for the weekend, all of this has to be factored in. And the way I see it is that a novel is like a rollercoaster. There is no time to stop for popcorn in between.

And the other thing is that if a guy’s job is to investigate brutal murders, bust drug scenes, wait around talking to doctors as they cut up bodies for autopsy, that guy will be disturbed. And damaged. Can you see him going home to his wife, tell her what happened at dinner and watch TV together? I know cops who actually do this kind of thing for a living and almost all of them are divorced, drink heavily, and the only people they seem to be able to confide in are their own kind. Detectives need to be damaged products. It makes them interesting. In John Milton’s Paradise Lost, the devil is so much more interesting than God. I remember that Raymond Chandler’s detective Philip Marlowe was about to get married towards the end of the series, but he died before he could.

Q So does this mean that a well-adjusted person cannot be a good detective?

A Well, there are writers who do this kind of thing well. There is Alexander McCall Smith’s lady detective in Botswana. But what she does is gently sort out local problems in the social community. I’m more interested in the darker, grittier side of life. And there are detectives who are in stable relationships. Both of McCall Smith’s detectives, Mma Ramotswe and Isabel Dalhousie. There are the Nick and Nora Charles books by Dashiel Hammett. Georges Simenon’s Inspector Maigret is happily married too.

Q There are detectives in Italy and China and Scandinavia, even Iceland. What is the tremendous appeal of crime fiction?

A Crime fiction is the perfect way to explore the world as it is. The big question is why does crime exist? Why do people do bad things to each other? This is what crime writers set out to answer. We feel the fabric of a society to try and understand what’s going wrong. And there can be no better person to do this than a detective. Because a detective has access to everybody—the junkie on the street, the politician, the doctor in the private clinic. And now, people are beginning to give crime fiction some respect. You can even study it at university. Some of the younger crime writers now see their writing as literary fiction. They don’t believe in the traditional genres.

Q As a crime writer, do you see yourself as a philosopher or social psychologist? Or, are you looking to set up the perfect puzzle with clues, et al?

A I have spoken to a lot of writers about this and it differs from person to person. Some people work out the entire plot of a story before they write the first page. I don’t work like that. I am not very interested in playing games with the reader. I want to know why a crime occurs in a society. I work with a theme and explore it. When I am working on my first draft, I am the detective. I find out who the culprit is as the book progresses. But this is a scary way of writing. I’ve been lucky but you might discover that it doesn’t add up in the end.

Q Have you read The Girl with the Dragon Tattoo?

A Yes, and I had big problems with it. I found it very slow. I mean nothing happens in the first 100 pages. It’s essentially a convoluted family saga. But there was something about it. Which is why I bought the second book and this one is going much faster.

Q I believe your neighbours are Alexander McCall Smith and JK Rowling. Do you go around to each other’s houses with a bottle of something?

A Professor McCall Smith is a very busy man, but we do meet for a cuppa at the café sometimes. Or drop in at each others’ houses occasionally. Rowling is a very quiet character, she’s seen very rarely. But we have found ourselves writing at the same café sometimes, so yes, we have met.

Q A senior Indian politician, Prakash Karat, is a big fan of your writing. In fact, Karat spent some time in Edinburgh as a student.

A Oh, I wasn’t aware of this. But I have met the actress who’s married to a prince.

A Ah yes. She had come to attend the Edinburgh film festival last year and she apparently asked to see my house when she was going around sight-seeing in town. So the driver called me and asked whether it would be alright if he drove them across. So she and her husband came over and we had tea. I signed some books for her and she was very happy.