An insider’s account of the apathy plaguing wildlife conservation 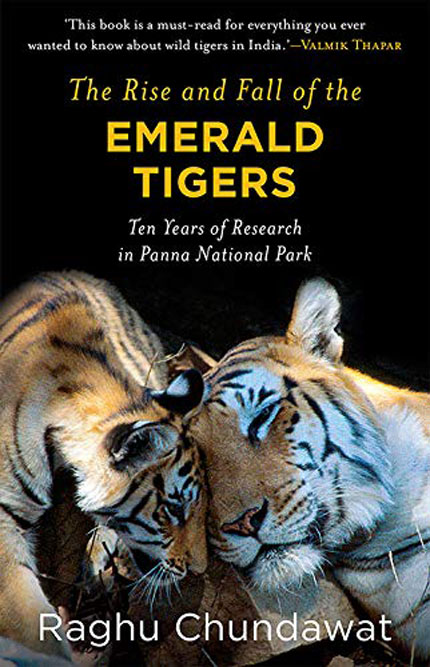 For any wildlife (and especially tiger) enthusiast, student or eager beaver wanting to make a career out of (tiger) conservation based on pure scientific research and monitoring, this book should be mandatory reading. Going off into an idyllic tiger habitat to study tigers, may seem glamorous and macho work. But be warned: it is a tough, repetitive, grim and gruelling grind often in extreme weather conditions, and has to be carried out 24X7X365 over a period of many years. And that may be the least of your problems—wait until the park management begins throwing its weight around, drunk on its own ego and unaccountable power.

For well-known wildlife biologist Raghu Chandawat and his research team what happened at Panna Tiger Reserve must have been like a nightmare from which, there was no salvation: here was a repeat of what happened in Sariska, happening all over again right in front of them—and they were powerless to do anything about it. Halfway through their epic study, one by one the tigers and tigresses (and cubs) they had monitored and followed over years, began vanishing. Till there were none!

In this book, Chundawat tells the story of what happened at Panna Tiger Reserve, where he had embarked on a long-term monitoring study of its tigers, between 1996 and 2006: the longest uninterrupted scientific study of tigers in the country. The book can be divided into two distinct parts: the first, covering the scientific study, research and monitoring, and the second (and devastating) part on how politics can become a wrecking ball when it gets petty, venal and vindictive.

The first several chapters outline the research methodology used in the study (number crunchers will be delighted with the numerous charts, graphs and tables in this book), the subjects covered and the analysis of the data emerging from the numbers. What does the tiger really prefer preying on, and why? What is tiger society really like (one finding that surprised me, was that boss alpha males tolerated the presence of other male tigers in their territory provided they behaved themselves and didn’t try to take over)? In relatively small Dry Tropical Forests (such as Panna), were tigers more at risk of going extinct? Were females more prone to attack people and defend their kills than males? How in a place like Panna could one scientifically go about ensuring their safety—especially for tigers that made their home in the buffer areas—where the chances of conflicts with people were greater?

Then, of course there was the politics. One thing comes out clearly: if the park management is on your side and provides encouragement—as it was during the early part of the study (until 2002)—then really the sky is the limit. Permissions are given (and the list is long), elephants provided for monitoring, the staff helps out (and its own morale is boosted), and work gets done. From 1996 to 2002 this happened—and one happy side effect of the non-stop monitoring of tigers (several of which, were radio-collared) was that it kept poachers at bay. Tiger numbers bloomed to 35.

In 2002, the management changed and the bureaucratic python began to squeeze. Elephants (vital for tiger monitoring and patrolling) were withdrawn to take tourists around (there were so many tigers to see now!), and the new management took a hostile and obtrusive stance against the research team. Permissions were withdrawn, huge fees were demanded, petty, time-consuming demands made (for example: a copy of every photograph taken had to be submitted to the management), impossible conditions laid down (which could nullify research), and when reports were presented—they were rejected out of hand. One of these very disturbing findings was that after 2002, tiger numbers, had started falling steadily—and extinction loomed on the horizon. Tigers were found with their legs in traps, or poisoned next to their kills. In a time-honoured manner, the management stuck its head in the sand and went into stonewalling denial mode. Then they did their own count and found 36 (mostly non-existent) tigers—one more than the best score! Then they banned Chandawat and his team from entering the park—perhaps the most shameless and vindictive thing they could have done. Worse, Chandawat discovered that at such a time, even reputed wildlife organisations sidled off to side with the management and many erstwhile ‘supporters’ disappeared. The few men who stood by him—the late Fateh Singh Rathore of Ranthambore, Dr. Ullas Karanth, Bittu Sahgal, (of Sanctuary magazine), Valmik Thapar and Faiyaz Khudsar (now running the Yamuna Biodiversity Park) were all strong tiger stalwarts, whose only concern was the well-being of the animal.

Of course, everyone was shocked when the crap hit the fan and the news broke that there were zero tigers in Panna, despite the whistle being blown on this for years. But were those responsible for this, taken to task? Not on your life! This book illustrates just how dangerous nurturing this sort of attitude can be.

Tigers were then re-introduced to Panna from other Reserves and the tiger count is now back, to a healthy 30. In the final chapters Chandawat outlines ways by which the situation in Reserves like Panna (which are relatively small) can be improved. But is anyone listening or concerned?

There’s the harebrained Ken-Betwa river-linking scheme being hatched, which will cut Panna in two and drown a sizeable chunk of the park. What a way to go!

This book will (and should) raise your blood pressure in a way that can only be healthy, for both you and hopefully the tiger—if you shout loud enough.