Sujit Saraf on his new book about a bandit and how slow and sarkari his former employer, Nasa, really is 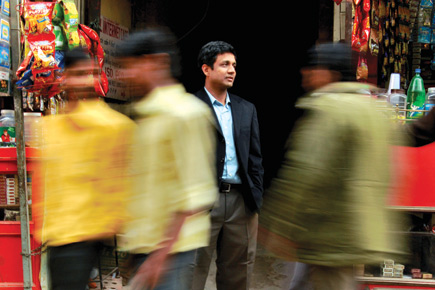 Sujit Saraf on his new book about a bandit and how slow and sarkari his former employer, Nasa, really is


Q What drew you to Sultana Daku?

A He was a dacoit who raped and plundered Banias and Thakurs in the early 1900s. He killed more than 100 people. When he died in 1924, people in the United Provinces (now western UP) were very relieved. They cheered the police when they caught Sultana. But within a few years after his death, three nautankis and a play were written where the whole story was reversed. He became a Robin Hood-like figure. And the policeman who captured him became a villain.

Q Why do you think this happened?

A Due to the prevailing circumstances. Both parts of the story–his life and his legacy as myth are both fascinating–so I wrote a novel on it.

Q Did you want to get inside his head?

A No. I’m separated from him by time, space and culture. He didn’t even speak Hindi properly. How on earth could I get inside his head? To be honest, people who read and write in English in India are closer to Samuel Pierce than Sultana. I just created a character. To some extent he represents the Bhantu ‘type’—full of all kinds of superstitions and weird beliefs.

Q What did you want to do then?

A I didn’t want to just narrate the facts of his life. He belonged to what the British called a ‘criminal tribe’ and, so, had been taught since childhood that rape, murder and mayhem were an acceptable part of life. Hopefully, in my book, I’ve given the character a human depth. I don’t pretend that he is Robin Hood, but he isn’t a totally dislikeable man either.

Q Are there any other books on him which you read up?

A To the best of my knowledge, there’s not much of note as such but there’s one story by Jim Corbett called ‘Sultana: India’s Robin Hood’ which is full of mistakes. It’s odd, in the very first paragraph Corbett says, ‘Every word of this is true’, but much of it is wrong. I have with me, many of the police reports that were filed by the SP to his IG – they were then confidential and are now publicly available. I found them at the British Library in London. There are also some really idiotic newspaper reports.

Q Do you think a book like this is targeted at Indian readers or Western ones?

A Hmm. (Laughs). Indian writers who live in the West may not say so, but they write for the West. They’re OK with having their books published here, but the focus is on readers there. That’s the market, there’s no money here!

Q Why did you switch from engineering to writing?

A I never switched actually. I always wanted to be a writer, but the world didn’t agree with me. Maybe now it will, at least partially! (laughs). I wrote during my final year at IIT, Kharagpur, as well as when I was working, even though I wasn’t being published. My job pays the bills.

Q How has IIT shaped your writing?

A I wrote my first book, ‘Limbo’, while in IIT. David Davidar rejected it but HarperCollins published it in 1993. My uncle lives in Daryaganj and I cycled to the office there and handed it over to HarperCollins/Rupa which had its office there then.

Q How did it feel?

A I was overjoyed. I had always wanted to be a novelist, and now, was finally published! (Laughs) Like many other first-time authors, I thought my book would rock the world of literature and it did not. So, I continued to write. I still have large number of unpublished novels and incomplete stories.

Q Tell us about working at NASA…

A It’s a big sarkari organisation, everything is slow, and there’s a lot of bureaucracy. It’s a huge government organization. The great achievements of NASA are not technological but procedural. It’s a triumph of management to send a human being to the moon since the technologies used in doing that were not path-breaking ones. For instance, today’s space shuttles use computers more obsolete than our laptops. They don’t have latest technology, but it’s a triumph of project management. A million little things need to be take care of, and NASA takes care of them. It is also true that NASA’s programmes have also created lots of little technologies. For instance, some kinds of plastic invented for astronauts’ gloves are now used around the house. NASA’s chief contribution is not technological — they didn’t invent the computer.

Q What was your role there?

A I was a research scientist at NASA. I worked for a firm that was owned by NASA. By training, I’m a mechanical engineer, what you would call a “controls engineer”. I study, for instance, orbits and how spacecrafts fly. For example, if you wanted a satellite to spy on Delhi, I could tell you where it should it be located to be perfectly over Delhi at 11 o’clock. By the way, 11 o’clock is the favoured time for spy satellites!

A Good visibility. Less cloud cover. Shadows come out as you approach noon – I’m getting very technical for a literature interview (laughs). When you see something from space, it is a point. For example, how do you know how tall a tower is from space? One way of ascertaining that, is to see the length of its shadow. So you need the sun to be at the right angle to fall on the object. If you go too early in the morning, the light is not good. In the afternoon, it is too bright. So between 11 and 11.30 are the best times for spy satellites, or for any satellites that need to photograph a city and get depth perceptions. I’m the guy who does the numbers and can tell you when and where to locate the satellite. I do similar stuff in my current job for Lockheed Martin, the guys who make the F-16.

Q What was special about your previous book ‘The Peacock Throne’?

A In any society where resources are scarce, the system is subverted by the individual, as the system doesn’t provide for everyone. For instance, here we will jostle for seats in a bus, because there are insufficient seats. In the West, it doesn’t happen as there are enough seats. They are no more or less polite than us. My point was to look at this behaviour in an environment of resource scarcity. My villains are no more sacred than my victims. Given the opportunity, everybody in the novel tries to victimise someone else.

Q How successful do you think are you as a writer in terms of commerce?

A I can’t make a living from writing in the US, but perhaps I can think about it later. In India, I can’t even imagine it, but in the West it’s conceivable.

Q Is that day close for you?

Q What sort of response have your books received?

A Generally good. But then sometimes I think people don’t read my books (laughs)!