Nasreen Munni Kabir manages to draw out the shy AR Rahman, though this biography lacks warmth 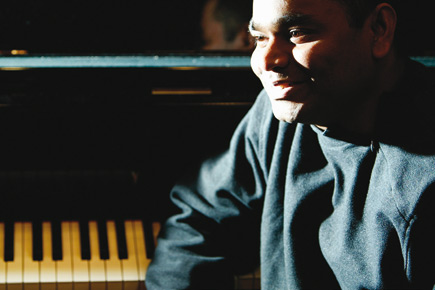 Nasreen Munni Kabir manages to draw out the shy AR Rahman, though this biography lacks warmth


You have given plenty of interviews. Why is it that you want to reveal yourself in a book now?” When an interviewer opens a memoir that has been drawn using a series of meetings and interviews with this question, the answer has to be special too. “Well, I’m a person [who] actually doesn’t like to look back in my work, in my day or in general. But maybe this is the moment. There are stories to tell that are not songs.” The interviewee in question here is Bono, rock band U2’s lead vocalist, in conversation with music journalist and self-confessed U2 fan Michka Assayas. With every interview, the Irish superstar’s personality unravels layer by fascinating layer. Bono confessed that he’s given long, pretentious answers to pithy questions in the foreword, although he could recognise himself in all honesty in the biography.

Composer AR Rahman may be at the absolute extreme on the character map in comparison to Bono, but he’s currently the closest India has to a musical superstar. And he’s similarly disposed towards his work. Rahman has said in an interview: “Once I’m finished with a song, it’s done. I don’t look back at it.”
While it’s commendable that biographer Nasreen Munni Kabir has succeeded in eliciting detailed, straightforward responses to most questions, her biographical interviews have been documented in an impersonal tone. In contrast, Kabir’s last biography on Lata Mangeshkar, also conducted in a conversational format, was much warmer and relatively impressionistic.

Kabir is clear that her job is that of a historian and is unapologetic about the fact that some of what Rahman has to say may not be new. But the interviews, conducted over the past eight years (Kabir maintains she began work in 2007, while Rahman says that it’s an eight-year project), could have done with some mojo. Even if it were to suggest when and how they were conducted—some were even done over Skype  —it might have added some colour. If a prelude to every interview seems a stretch, an extended foreword could have introduced us to the process.

The book opens with a question that has been asked in most of his recent interviews: 20 years on, what do filmmakers want of his compositions? The answer, too, isn’t unfamiliar to those who have followed his career. But Kabir, who has been a historian for close to three decades now, quickly picks up pace, referring to what the likes of film critic Richard Corliss have said about Rahman’s sound. The composer opens up at length about his craft in particular, and Kabir relentlessly pursues this subject across the book till she’s found her answer. There’s a particularly brilliant section on how Rahman draws upon the poetry of South Indian poet Subramaniya Bharatiyar and Sufi poet Baba Bulleh Shah when he hits a musical block. Kabir also succeeds in getting the extremely taciturn composer to take a critical look at Shankar, one of the most successful filmmakers he’s worked with. For Rahman to admit, “I think Shankar is trapped by his own success”, is a big deal. Rare personal glimpses into his life which suggest Rahman may have been worried about marriage or education are alos largely to the credit of Kabir, whose tone is friendly yet non-intrusive.

The biography definitely has more substance when compared to the poorly-written AR Rahman: The Musical Storm, an unauthorised biography by journalist Kamini Mathai that hit stands two years ago. Kabir also focuses more on the music here than the man. And there are instances where one feels Rahman’s voice has been edited. For instance, Rahman’s vocabulary doesn’t include words such as ‘hackneyed’ and ‘leitmotiv’. While an international audience may not realise this, it may have been easier to use a simpler form to explain his viewpoint.

That said, CD of Rahman’s unreleased non-film work is a winning move on Kabir’s part. She convinced him to include it. As for the biography, there’s definitely scope for more, perhaps five years ahead.