Revolutions in a Headscarf

Award winning author and blogger Shelina Zahra Janmohamed speaks of changing the world with her words. 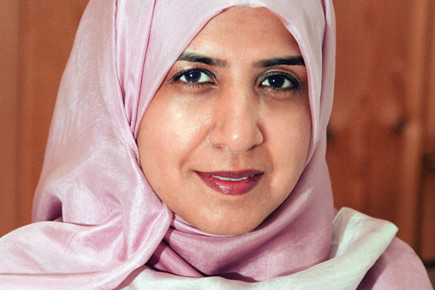 Award winning author and blogger Shelina Zahra Janmohamed speaks of changing the world with her words.


Shelina Zahra Janmohamed is fast becoming the face of Muslim women in Britain. Over the last five years, ever since this British Indian started writing her blog Spirit21, her voice has grown to represent the liberal face of her community. Having broken the many stereotypes of Muslims both in her award-winning blog (it won the Brass Crescent Award for Best Blog and Best Female Blog) and commentary in, among others, The Guardian, BBC, Channel 4 and The National, she was recently named in the UK Muslim Women Power 100 list by The Times newspaper and the Equalities and Human Rights Commission. Her memoirs, Love in a Headscarf: Muslim Woman Seeks the One—which was first published  in Britain in 2009 and won the Muslim Writer’s Award, and is being launched in India by Amaryllis—though, are an irreverent take on her hunt for Prince Charming in an arranged marriage setting, a search made no less challenging by the fact that she studied at Oxford. In an interview, she speaks of love, hate and freedom:

Q You won the 2009 Muslim Writer’s Award for Best Non-Fiction.  How does being tagged as a ‘Muslim writer’ affect you?

As a new writer, being ‘labelled’ is a paradox. On the one hand, it is an opportunity to get a break into publishing, because your voice is something unique. But on the other hand, minority writers are often only given a very narrow space within which to express themselves, and then become pigeonholed for any future writing. For example, when I wrote Love in a Headscarf, I found publishers didn’t grasp that it wasn’t the usual story of ‘oppression’ or ‘misery memoir’.

Q In your blog, you raise issues connected with your community. What is your role as a writer: to give vent to your creativity or to influence opinion?

George Orwell wrote that there are four main reasons why people write: egoism, aesthetic enthusiasm, historical impulse and political purpose. For the latter, he meant the desire to alter other people’s idea of the kind of society they should strive after. That’s really where I began my public writing career.

It was the change of atmosphere and events around 2005, including the 7 July bombings in London, that prompted me to set up a blog and put an opinion into the public space that was more measured about the challenges we face as a society to learn about each other. But after the blog and the book, I realised I write not just to change opinion, but because I enjoy it, and the best way for me to work through the ideas in my head and to engage with the world is to capture things in words.

Q In Britain, you are seen as a spokesperson for Muslims. Is this a role of your own choosing?

I think we each have a responsibility to create understanding in society, and to do so to the best of our ability. I think often people are scared of titles like ‘spokesperson’ for fear of saying ‘the wrong thing’. But the only thing a spokesperson really does is convey with honesty and confidence the voices of those who are not heard in the way they want to be heard. If I can be a small part of making those voices a part of our civic discourse, then I consider that to be a real honour.

Q How has writing the blog changed your life?

I’ve been writing the blog for more than four years, and it’s made me realise a very important thing—your opinion does matter, and you can indeed change the world. Every human voice is important.

Q Your book is really a rom-com. What made you choose the chick-lit style of writing?

In fact, the lighter, more humorous style of Love in a Headscarf is closer to my natural writing style. And I think it works particularly well for a book about love. For me, love is a universal story, and humour is a universal language for discussing it. In particular, Asians and Muslims are seen to have a very serious attitude to marriage, and I think that anyone who has been through the arranged marriage process and all its cultural accoutrements will know that there is a lot of comedy that accompanies the serious moments.

Q Your book starts with the anticipation of meeting Prince Charming. In a recent blog post, you dismissed fairytale notions of romance. Is Mr Right an illusion?

I think, as young women, we grow up with fairy tales that suggest we will meet the perfect man one day. Whilst I think it’s good to have high standards, it’s important to know that no other human being is perfect—they just need to be right for you, and you need to work at building a loving relationship. He becomes Mr-Right-for-you.

Q What is your opinion on the burkha ban in France? Is it disturbing to be a Muslim woman in Europe at this point?

Reports saying that most Brits support the ban are actually nonsense. Britain has a great tradition of tolerance and live-and-let-live, and there have been constant statements from leaders saying that the burkha will not be banned in the UK. But I’m worried that the rise of anti-burkha sentiment across Europe is a signal of a worrying xenophobia. The best I can do is keep explaining why it is so important to Muslim women and emphasise that freedom of choice to dress as they want is something we must support.

Q The headscarf is obviously very important to you. Would you please explain why?

I believe that modest dress is an important component of social etiquette for both men and women. As a woman, this includes for me the covering of my hair, along with loose clothing to my wrists and ankles. But I think it’s still important to retain aesthetics and personality in the way you dress. I also see my headscarf as part of my feminist identity, a marker of the notion that women should be judged for who they are, and not how they look.

Q You see yourself as a feminist?

Yes! I think of myself as a feminist, because I believe that men and women should be treated with equal respect and value. I feel that the best way to be a feminist is to lead by example, and to engage in change through compassion. Islam talks about creating change through ‘good and kindly words’.

Q You’ve written of being brought up by liberal parents amidst more conservative relatives. Was being a girl sometimes unfair?

I must give my parents credit for being remarkably even-handed. But Asian society has strict ideas about what girls can and can’t do, and when I was younger, I felt those rules were often entirely arbitrary. In fact, I sometimes still feel like that. I think it’s really important to encourage Asian society to tackle ideas about the education of women (it’s important), the presence of women in public space (no, it won’t lead to the end of civilisation as we know it), and of changing roles within marriage (no, he won’t be stripped of his masculinity if he cooks or cleans).

Q You’ve also written of segregating your life in school, at home and in the mosque.

Like many teenagers, I found it difficult to reconcile all the different elements of who I was, and to have the confidence to be myself. I think many youngsters go through that same feeling, but it was exacerbated by the fact that my different components of school, religion, community and culture were so different, and that the world was so unfamiliar with Asian culture and Islam at that time.