The little known, and thoroughly fascinating, truth about the Rani of Jhansi Regiment 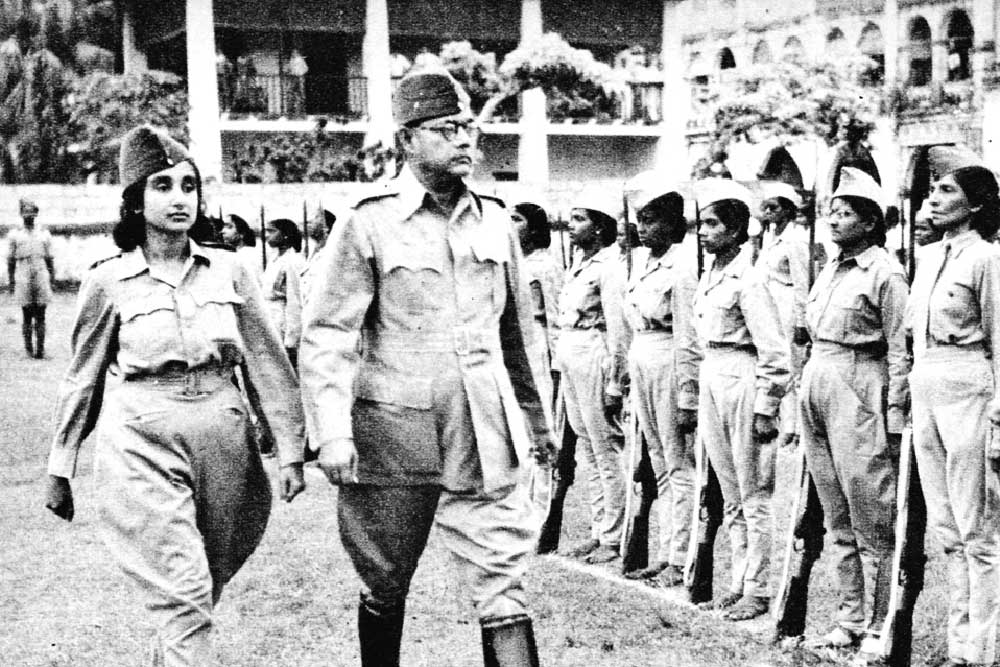 THE HISTORICAL RANI of Jhansi, 19th-century Maratha queen and Indian nationalist, is frequently portrayed on a rearing horse, brandishing a sword with an infant tied to her back. That last detail is pure fiction: the child in question, ostensibly her son, was 10 years old at the time of the battle memorialised, and no evidence exists of his having accompanied her in combat. The maharani’s role of mother—a pleasing one within the patriarchal realm—is merely reinforced by the symbol. Nearly a century later, it was her spirit (or at least, symbol) that Subhas Chandra Bose called upon to form the Rani of Jhansi Regiment (RJR), the Indian National Army’s all-woman unit.

Largely considered a footnote of sorts in the anti-colonial struggle, the RJR was primarily given interest due to its charismatic Captain Lakshmi Swaminathan, who later became the illustrious Dr Lakshmi Sahgal. Vera Hildebrand’s Women At War: Subhas Chandra Bose And The Rani of Jhansi Regiment does not simply stop at the cursory, but separates fact from myth, and fills in gaps in public knowledge. Swaminathan’s own memoirs were largely embellished with vivid scenes of combat—which the Regiment never actually participated in firsthand. The RJR propaganda project, and Bose’s order to destroy INA records, also created misperceptions. The book presents a compelling case that what actually happened is more interesting by far.

Bose organised the RJR in 1943 in what is now Singapore, and the total number of recruits is an estimated 450. These recruits were often teenage girls—even as young as 12— although rules stipulated that they had to be over 18 years old. Dr Swaminathan and other Indian women like the teacher Protima Sen in Burma were tasked with convincing parents to sign the permission slip (curiously, married women were required to obtain this from their husbands, a point that undermines the stated premise of gender equality).

Hildebrand sets the context of the Indian independence struggle and charts Bose’s personal and political growth extensively. Numerous gender-related issues abound in the formation, and indeed legacy, of the RJR. Bose initially shared Gandhi’s prudish views on sexuality, and was even disappointed that his own firstborn was a girl, but later grew to become an advocate of birth control and women’s rights. Gandhi used women in sexist ways in the freedom struggle, and it is clear from this book that some of Bose’s initial motivations were also objectifying in nature. He eventually developed the view that complete gender equality also meant military action. That the RJR did not engage in combat disappointed all concerned. Hildebrand’s neutral, thorough research allows for a wide range of questions to emerge. For instance: did Bose select impoverished illiterate women for the task as their bodies, and lives, were considered more expendable? The historian HN Pandit suggests that the entire enterprise was to shock, and thereby destabilise, the British army with the sight of slain women on the frontlines.

The little known, and thoroughly fascinating, truth about the RJR is that most of its members had never been to India. 60 per cent of them were young Tamil women from the Malayan plantations. 20 per cent were Sikh (Hildebrand was unable to find any surviving Ranis from this category). Joining them were college-educated, Burma-raised women and others from various parts of the motherland. Hildebrand’s extraordinary research culminated in interviews with all the living Ranis that she could track down, the majority of whom are elderly Malaysian ladies. A centrefold of photographs attests to Hildebrand’s description of them as sweet old women’—but more importantly, sweet old women who still remembered their bayonet exercises, which they gladly demonstrated to her, even when unable to rise out of their seats. ‘With a grimace and a grunt these octogenarians thrust their rifle hard forward, and made a swift upward movement with the fancied bayonet. The training mantra still etched in their brains, ‘[Maaro, kheencho, dekho]—kill, pull out, look.’ Then they usually smiled and said, ‘That’s how you kill the enemy.’’

For two years, the Ranis trained as soldiers, although it emerges that they were ill-prepared for the jungle. While they did not go to war, their time in Rangoon in particular contained many grueling demands, including long-distance night marches and jungle treks. The RJR was formally disbanded in 15 August 1945, just three days before Bose’s sudden death in a plane crash, although groups had been sent home at various points for some months. Hildebrand writes that most of the Ranis ‘found no audience’ for their stories, instead quietly assimilating back into ordinary life, and sometimes concealing their military participation in order to do so.

THIS PARTICIPATION, lionised as being for race and motherland, was in fact more likely to have been about poverty or about escaping oppression. At 14 years old, Rani Muniammah, the daughter of a rubber tapper, was encouraged to join the RJR so as to have regular meals. Decades later, in a living room with a dominating portrait of Bose, she repeats army slogans to Hildebrand but admits it wasn’t until she enlisted that she had considered the Indian identity. Rani Janaki Bai, too, was encouraged by her father to enlist in order to avoid an arranged marriage. Hildebrand further contextualises the background of most of the Ranis: ‘Many of the women who joined the Regiment from the large rubber estates in Malaya lived and worked under conditions that approached slavery. Sexual abuse by the mainly white estate managers was a common occurrence. The Rani of Jhansi Regiment offered an environment where for the first time the young women found themselves respected and freed of the social stigma of ‘coolie’ status.’ After their stint in the RJR, Ranis Rasammah Navarednam Bhupalan and Janaki Thevar Athinahappan turned their attention toward Malaysian independence (won in 1957) and various social justice causes thereafter. However, the book glosses over the problems of race in Malaysia.

The RJR belongs not only to Indian history, but to South East Asian history as well; Hilebrand notes the absence of material on them in Malaysian archives. They were willing to fight, and even to kill or to die, for India’s independence, but as Rani Janaki Bai tells her, “In India we would be foreigners.” The story of the RJR is shot through with far deeper colonial implications: born and raised in South East Asia, but belonging to a disenfranchised communities in a region with sociopolitical problems that did not allow them to forget their roots, and with no sentimental attachments to India other than those roused by Bose, these women complicate facile narratives of patriotism.

This book is very much a historian’s tract, not a biographer’s. While the Ranis’ intricate personal stories are not explored in depth, Hildebrand clearly classifies apocrypha as such but uses it in an enlivening fashion. For instance, there is mention of a secret service within the Regiment, which involved a blood oath. Thirty or so Ranis were said to have cut their own fingers to paint a tilak on Bose’s forehead before signing a pledge; Bose was said to have wept with joy at this sacrament. Rani Mommata Gupta, meanwhile, insisted to Hildebrand that a hole had been drilled in one of her teeth, in which she was meant to smuggle microfilm to India.

This much is poignantly, powerfully made clear: what these unlikely soldiers experienced was not only an unusual adventure, but in a strange way a reprieve. As Hildebrand notes, many Ranis described those two years as the best ones of their lives. Their lives before they enlisted were chiefly as daughters; after, they continued in ways that largely recognised them only as wives, mothers, widows and grandmothers. Women At War is a fascinating testament to some women that history almost forgot, who like the apocryphal baby on the back of the original Rani herself have never been seen as anything other than figurative.