Preet Bharara: ‘It’s the height of arrogance for Rajat Gupta to go smearing other people’

Preet Bharara has earned enough enemies in his career as a US attorney. Now he has written a book on crime and punishment. The high profile Indian-origin prosecutor in conversation with Bhavya Dore 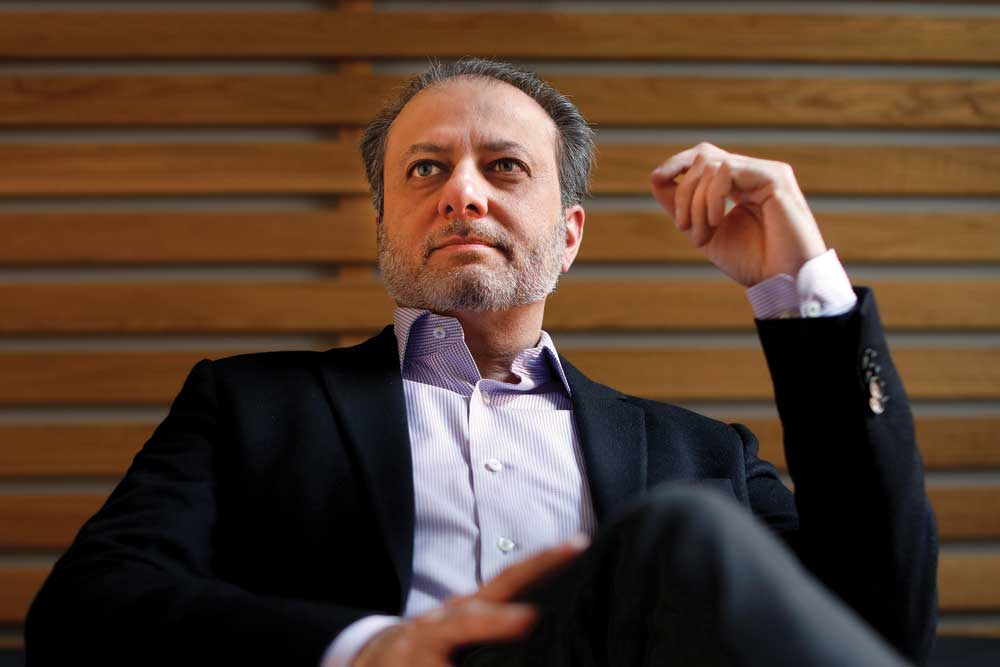 PREET BHARARA WORKED as a US attorney for the Southern District of New York for seven-and-a-half years, overseeing an office of 200-plus assistant attorneys, before he was abruptly fired by President Donald Trump in March 2017. His recent book, Doing Justice: A Prosecutor’s Thoughts on Crime, Punishment and the Rule of Law (Bloomsbury; 368 pages; Rs 499), offers a compelling account of his time in office prosecuting financial crimes, mafia bosses and terror suspects. Weaving in his own experiences in one of the most high-profile legal jobs in the country, along with philosophical reflections on leadership, legality and morality, Bharara makes for a sharp and engaging raconteur.

Indian-origin Bharara, raised in the US, shot to the limelight particularly when his office dealt with the cases of Rajat Gupta, the head of Goldman Sachs, who was later convicted of insider trading, and of diplomat Devyani Khobragade, accused of visa fraud and underpaying her domestic help. The arrest and strip-search of Khobragade prompted a diplomatic row between India and the US. Bharara was accused of being a showy prosecutor and a self- loathing Indian immigrant out to nail people from his own ethnic background, accusations he deals with in the book.

Since leaving office he has been hosting his own podcast Stay Tuned with Preet that looks at issues of justice. He is also a Distinguished Scholar in Residence at the NYU School of Law. Excerpts from a phone conversation:

Why did you write this book now?

I had some time because I was no longer in office. There was the opportunity to spend some time more deeply thinking about the issues and the cases I had overseen over the period of seven-and-a-half years as US attorney. I wanted to explain to the public a little bit my thoughts and my former office’s thoughts about how to make decisions, how to proceed fairly, how to reach the truth, how to render judgment in a way that was hopefully both thoughtful and entertaining. At this moment in America there’s a lot of concern about the rule of law and people’s understanding of the rule of the law. So I thought it was a pretty good time to go back to first principles like justice and doing the right thing.

You talk about some of the negative reactions you got from India and Indians during a couple of high-profile cases while dealing with Indian defendants (Rajat Gupta and Devyani Khobragade). How much did those reactions surprise you and how did you deal with them?

It certainly surprised me a little bit. In the Khobragade case when the defendant was from India but the alleged victim was also from India, it was not immediately clear to me why so much of the media sided with one Indian over the other Indian. I’m not sure how well that speaks for many of those voices.

As I write in the book you have to separate good criticism from silly criticism. And the suggestion that I was somehow self-hating or self-loathing in going out of my way to prosecute [these] people was obviously outrageous and frankly, silly. There are a lot of cases in my office that are investigated and prosecuted by career agents and prosecutors who don’t take direction from me on which people to target. We have a large docket in our office and we prosecute lots of people of every ethnic background, of every class, of every socio-economic status. There will always be before I got there and after I got there some people from India who get charged, and it doesn’t make a difference if the US attorney happens to be from India or not.

Rajat Gupta recently said he was unfairly dealt with, putting his case down to prosecutorial zeal.

I think it is a somewhat sad attempt at rehabilitation by blaming everyone other than himself. His case was investigated and the wiretaps prove long before any prosecutor named Preet Bharara at the head of the Southern District of New York. He was also the subject of enforcement action by the Securities and Exchange Commission, by career people there, by career [Federal Bureau of Investigation] agents and prosecutors in my former office. Based on the facts and nothing else he was given a fair trial; he was convicted at that trial. He appealed; he had a fair appeal heard. He was denied his appeal also. He would do well to find some contrition rather than blame everyone else and accuse others of bias.

His actions that everyone can read about at trial and the trial where he violated his oath as a director of a publicly traded company repeatedly, he sealed his fate as a disgrace for the business community based on his own words and his own conduct. Period. It’s the height of arrogance for Rajat Gupta to go smearing other people when every eventuality was brought by his own conduct.

Looking back, would you do anything differently in either of the cases?

The Indian diplomat case was done, again, by career people at the state department who asked the Southern District to engage in the prosecution. I think there was a miscommunication between the state department agent and the US marshall service who were exclusively in charge of how a defendant is treated in custody. And they followed their own procedures for the brief period of time she was in custody which included under their protocol, not the US attorney’s protocol, a safety search. Speaking as someone not involved in that process, although I got blamed for that, they might have figured out a way, given they were not seeking detention pending trial, to not put her in the prison cell while the bail issue was being worked out.

The suggestion that I was somehow self-hating or self-loathing in going out of my way to prosecute these people was obviously outrageous and frankly, silly, says Preet Bharara

Have you gone through the Mueller report? What are your first reactions?

I read the whole thing [on April 18th], all 400-odd pages of it. My reaction is it paints a devastating picture of a president and a White House that were very comfortable lying and comfortable trying to obstruct a lawful investigation that was begun by one of his own appointees; that Bob Mueller was troubled by a lot of the conduct, and appears to have left the question as to what accountability should be had to the Congress. They can decide whether or not to have more hearings and I think lots of people will be focusing on some of the more disturbing and troubling details in the days and weeks to come.

So you’re saying it doesn’t exonerate the president?

The report itself says on the question of obstruction of justice that it doesn’t exonerate the president. Those are Mueller’s own words.

So what’s next for the president and the White House? Is impeachment feasible?

I think that is the debate within the Democratic Party and particularly in the House of Representatives. There are some leaders who think it is not a good idea politically. There are others who think it’s their constitutional duty to make sure the truth comes out and accountability is had. I’m an outsider as an ordinary citizen, so I’m watching just as carefully as everyone else is. I think it has now become something of a political question rather than a legal question.

You’ve earlier said that your previous office is perhaps a bigger danger to the president than the Mueller investigation. Why?

I don’t know if it’s a bigger danger. The office [of the US attorney] doesn’t have circumscribed jurisdiction because they are not operating under a narrow regulation like the special counsel Bob Mueller was. They can look at any crime, in any period, investigate any aspects of the president’s business, foundation, inaugural committee. They are also harder to shut down than Bob Mueller.

Part of your Twitter bio reads: ‘Banned by Putin, fired by Trump.’ Do you hold those things as badges of honour?

How has it been moving from prosecuting to podcasting?

It’s been an interesting transition. Some of it is similar. As I write in the book at some length, a lot of the prosecutor’s work, of lawyers’ work is communication and persuasion, and asking questions obviously. I have a whole chapter on the importance of asking questions. And what you do in a podcast is you try to explain things, tell stories, break things down and ask good questions. And hopefully my training in my prior life has informed and improved my performance in my current role. I have been enjoying it very much.

What are the qualities of a good prosecutor? Is there too much emphasis on having perfect conviction rates?

That should not be the focus. You obviously need to be smart and well trained but, more importantly, I think you need good character, integrity, an open mind, a sense of fairness. And most important of all—excellent judgement. As I write repeatedly, lots of the hardest questions that you need to resolve, the answers to those are not found in a book. They take judgement and wise exercise of discretion. You can have the smartest person in the world who maybe doesn’t have a good ethical compass, and you don’t want that person to be a prosecutor. You look for people who have a sense of proportion, a sense of perspective and a sense of humanity. Those are incredibly important qualities for a prosecutor.

I wouldn’t say especially closely. I had a professional trip where we discussed the Indian legal system and national security and terrorism prosecutions in the fall of 2016 when I was still the US attorney.

There has been a debate here on whether judges should appoint judges, which is different from the system of top judicial appointments in the US. Does either system have merit over the other?

In America there is no one system of appointments. Federal judges are appointed by the president and have to be confirmed by the Senate. But there are other judges who run for elections. And some judges have life tenure, some serve for a particular term. So there is no one system in America either. On judges picking judges, I would have to know more to be able to comment.

Though every MeToo case is different, what are the implications of belated allegations and are they prosecutable?

It depends on the circumstances. But obviously when time passes, people’s memories fade, evidence gets lost, sometimes witnesses can’t be found. So usually, time is the enemy of prosecution.

What’s next for you?

I’m still recovering from promoting my book. I am going to the UK next week. I have various projects and thoughts but am not going to start anything until a short vacation.

Will you do a book trip to India?

I have nothing planned at the moment, but I’m hoping to.