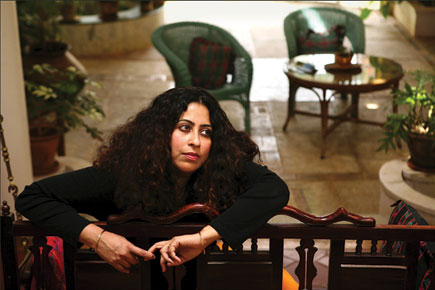 What’s it about food writing that tantalises our soul? When Pablo Neruda writes in A Lemon, ‘Cutting the lemon/ the knife/ leaves a little cathedral:/ alcoves unguessed by the eye/ that open acidulous glass/ to the light; topazes/ riding the droplets,/ altars,/ aromatic facades’, it opens cellar doors in your head that you never thought existed. It plates that moment when your food memory collides with someone else’s fecund imagination. Anita Nair creates a series of odes to food in her new book that almost fits in your palm—if you have nice big hands—like a warm mug of soup. The book, incidentally, is called Alphabet Soup for Lovers.

Komathi is learning the English alphabet. Her 57-year- old brain doesn’t quite get the hang of it, which is when her granddaughter asks her to associate each letter with a food that she knows. And food she knows, having been Lena’s cook for decades in the Anamalai hills. Komathi’s Tamizh has slipped a bit over the years that she has stayed with the Malayalee Lena and her family: instead of the Tamizh ‘seerakam’ that she has always known, she has started saying ‘jeerakam’.

But we have to begin with ‘A’. For Komathi, ‘A’ stands for the ‘pleasing fullness of Arisi Appalam’, not the ‘dull crunch’ of Apple. And so Nair goes, stringing Badam and Goduma Dosai and Inji and Oorkai, each food standing for a letter, each food revealing an emotion, each food prefacing a chapter.

N is for Nande (crab). ‘And when you are done, the debris litters the plate and table, the juices are splattered on your clothes and around your mouth is a faint tingling of the skin from the spices and abrasions caused by the shell as you bit down on a claw or sucked the flesh from within. That is how it is with love.’

That is how Nair constructs the book—pairing food with the story of Komathi, of Lena Abraham and her husband KK, who is as terse as his name, and Shoola Pani Dev, the ageing movie star with the funny moniker who arrives one day at Lena’s charming guesthouse in the rain-soaked hills to recuperate from the slings and arrows of South Indian stardom.

Lena, a 38-year-old with three grey strands on her right temple, does not believe in the bonbon kind of love and so is happily married to KK. ‘There is an absence of messy emotions between them, the sort that can throw people off kilter. They don’t question and judge and this allows them to remain wedded to each other.’ Into this lacklustre relationship, ‘a plateau of no expectations’, comes Shoola Pani. Lena goes to greet her guest at the cottage, and by the end of her visit, they look at each other and it ‘is as if the two of them have just felt a delicate contouring of their souls’.

Their romance in the hills is aided by such corny props as a walk to an old English cemetery, a stray puppy in the ditch, a crèche for poor children and tubes of jeeramuttai, ‘multi-coloured, sugar-coated cumin’ that sweetens the mouth for the first kiss. So should Lena wrest control of her life and leave her husband who eats only bread for breakfast and run away with the actor who has a wife in the background?

Fie, there is a fly in the soup. The condiments are far more interesting than the characters.

Try this: S is for Sora (shark). Don’t jump, you foodie arriviste. Tiny sharks make for delicious thoran in Kerala, its sharpness mellowed by a handful of muringa leaves. Best compliments to Nair for thinking up sora. Even though young Komathi in faraway Tamil Nadu, incredulously, gave up eating sora after watching ‘Jaws or Juice or something’ at the nearby ‘cinema kottai’, she does make sora puttu for Lena along with sora fry and a curry with the head. There is more meat in that slip of a shark than in the plot.

I am glad C is for cheppankizhangu (colocasia) and E is for Eeral (liver) and Q is for Qollu (horsegram), thus redeeming them from the dark corners of food writing, but isn’t Nair missing some delicious dishes that Lena Abraham and her Ammachi must have surely made Komathi cook in their Kerala Christian kitchen? Oh where are the tharavu roast and the panniyirachi, the meen pollichathu and fried beef? Too much rain has addled Komathi’s memories.

I am sorry if I’m picking on the food, but Komathi’s pot is better than Nair’s plot. Nair, we have a saying at home: if the catch is fresh, the fish curry will evidently taste good. If the fish has gone bad, no masala can save it. If there is no plot, karuvepillai and murungakai can’t do much.

(Charmy Harikrishnan is a Kerala-based journalist)