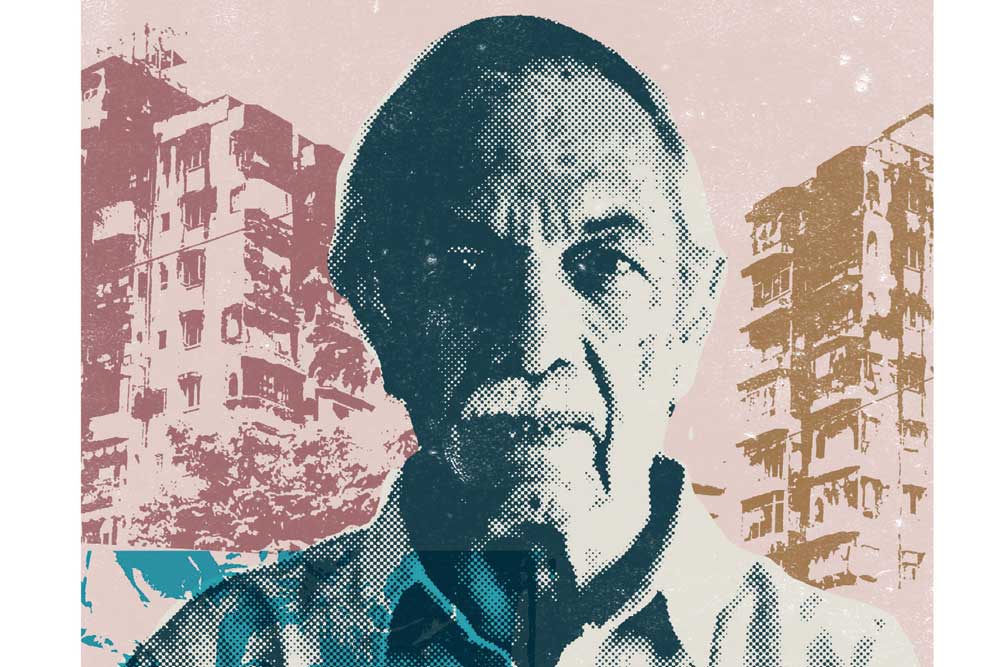 “I THINK THE READING of great, or even good, poetry has a humanising effect,” says Gieve Patel. “A good poem”, he believes, arrives at an “area of freedom” away from lies. One of the earliest poems to have this impact on Patel was DH Lawrence’s Snake, which focused on a boy who regrets throwing a log at a snake. He says, “It conveyed to me a feeling for the sacredness of all life.” It’s an emotion that he carried into his most famous poem, On Killing a Tree, which lays bare the extraordinary effort required to kill a tree beyond possible resurrection. The poem, which has appeared along with Lawrence’s Snake in school syllabi around the country for decades, is responsible for Patel being one of the most widely known poets in India.

He clarifies that he doesn’t believe “all human beings are necessarily open” to the lessons ensconced within poems. “If they want to do so,” he points out, “some can derive even negative impulses from the loftiest texts.” Born in 1940, Patel began to write poetry when he was in school, though he did not consider any poetry he wrote before the age of 20 worth preserving. The poems he wrote after that form his three published collections of poetry—all of which are out of print. But an archive of his influential work has been made possible by the release of Collected Poems (Poetrywala; 178 pages; Rs 350), which includes his previous books, new poems for the first time in nearly three decades, and a few of his translations of the 17th-century Gujarati poet Akho’s work into English.

The collection is introduced by Arundhathi Subramaniam, who compares Patel’s careful gaze to that of ‘a seasoned forensic pathologist’. In his first two melancholic collections—Poems (1966) published by Nizzim Ezekiel and How Do You Withstand, Body (1976)— he documents failures of the body, medicine, city infrastructure, and social norms and hierarchies. He casts his eye around Mumbai examining the city’s moods, visitors and the lives of those on its fringes. Within those stories, he finds that the ‘space of freedom is small/ but possible’. Patel’s cityscapes are both a celebration and a defence of Mumbai. In a moment that cuts straight through to the reason many people love the city, he begins a poem with the line, ‘The city gives you the sea…’ He says it is a subject he returns to over and over in his poems because “for all the contradictions and injustices, Bombay has offered a kind of shelter to people from all over the country. It is an amazing city seething with vitality.”

His third book, Mirroring, Mirroring (1991), followed 15 years later, and with a distinctly older voice that is surprised by its own brevity. The collection opens with a poem that signals a clean break from the style he had come to be known for. He is “embarrassed” by his new interest in God and compares it to ‘lisping in public/about candy. /At fifty!’ In another poem, he asks for his soul to be ‘carried away/ … by transport/ none other/ than Indian Railways…’ In these poems, he plays with the lyricism he avoided in his early work.

The newest poems embrace a similarly whimsical tone at times—shifting their focus from weightier matters to used magenta underwear on the beach, the life of stray dogs in a rich city, and the task of carrying bras and panties into a performance at the National Centre for the Performing Arts. Patel isn’t certain this change in tone is here to stay. He says, “It is almost impossible for one to predict in which direction the writing would be going.”

How much of himself does he reveal in his writing? Patel’s poems are not confessional. At best, he allows stories of other people to bear a partial reflection of himself. But embedded within poems that will not give away too much are lines such as ‘I remember how my parents would pray for me. / Who knows but that the dead/ are touched by our forgiveness of their deeds’ and ‘the embers of family pain/ tossed hand to hand as though/ to music like a party game’. Their impact is immediate because of the scarcity of such moments as well as the strength of these sentences which present common human dilemmas in memorable ways.

Besides also being a well-regarded painter and playwright, Patel has had a long career as a physician, which makes him part of a well-documented tradition of doctors through the ages who have also chosen to write. Patel says, “There is a tremendous amount of intimate human contact involved in the practice of medicine. This is bound to touch the practitioner’s own emotional life—if he allows it to! When such a practitioner also has some interest in writing, we have before us the doctor-writer.”

Patel’s poems often borrow from hospital experiences. In one graphic but characteristically dispassionate description, he writes, ‘…at times of riot, / I watch intently the man…with a slit belly/ bewildered, but firmly holding a loop of his own gut/ in his hand.’ Patel received the details of this scene from another doctor who had seen the man in the poem. He says, “In the poem, I change it to something ‘I’ saw. This is the element of ‘fiction’ that necessarily enters into any work of art. The artist uses everything he sees and hears as raw material to be appropriately moulded for the purpose of manifesting his vision.”

On the subject of whether poetry contributes to life as a doctor, he says, “Charles Darwin used to say that if he were to live his life over again, he would add this one activity to it—he would read one new poem each day of his life. I have been a regular reader of poetry. Undoubtedly, it affected me in a positive way in my practice of medicine.”

Some of Patel’s paintings and poetry are in conversation with each other. He explains, “Some themes appear in both, but they tend to appear many years apart. The theme of violent death, which one sees in my poems around the 1970s, appeared much later in the paintings— around the mid-1980s.” Other themes common to both include an interest in outliers and Mumbai’s streets. Similar to the titles of his poems, he prefers the names of his paintings to “be direct, not fancy” while also being “evocative”. Occasionally, he uses a title “to actually take attention away from the theme” such as in “a painting where an armless man is being fed his lunch by a little girl” for which he chose the title Near the Bus Stop so as to “not heavily underline a theme which is already emotionally charged”.

One of the pioneers of Indian poetry in English in the 1970s, he is pleased with the burgeoning poetry scene in the present day. Among the younger poets, he reads the work of Ranjit Hoskote, Arundhathi Subramaniam, Anand Thakore, Vijay Nambisan and Sridala Swami, amongst others. At the moment, he’s re-reading Brothers Karamazov as part of a larger revisiting of “all the major Dostoevsky novels” for the third time.

He’s currently working on translating more poems by Akho into English as well as a “large painting and some drawings”. Patel is clear that he doesn’t believe that the publication of his Collected Poems signals an end to his career in poetry. “I hope,” he says simply, “to continue writing.”