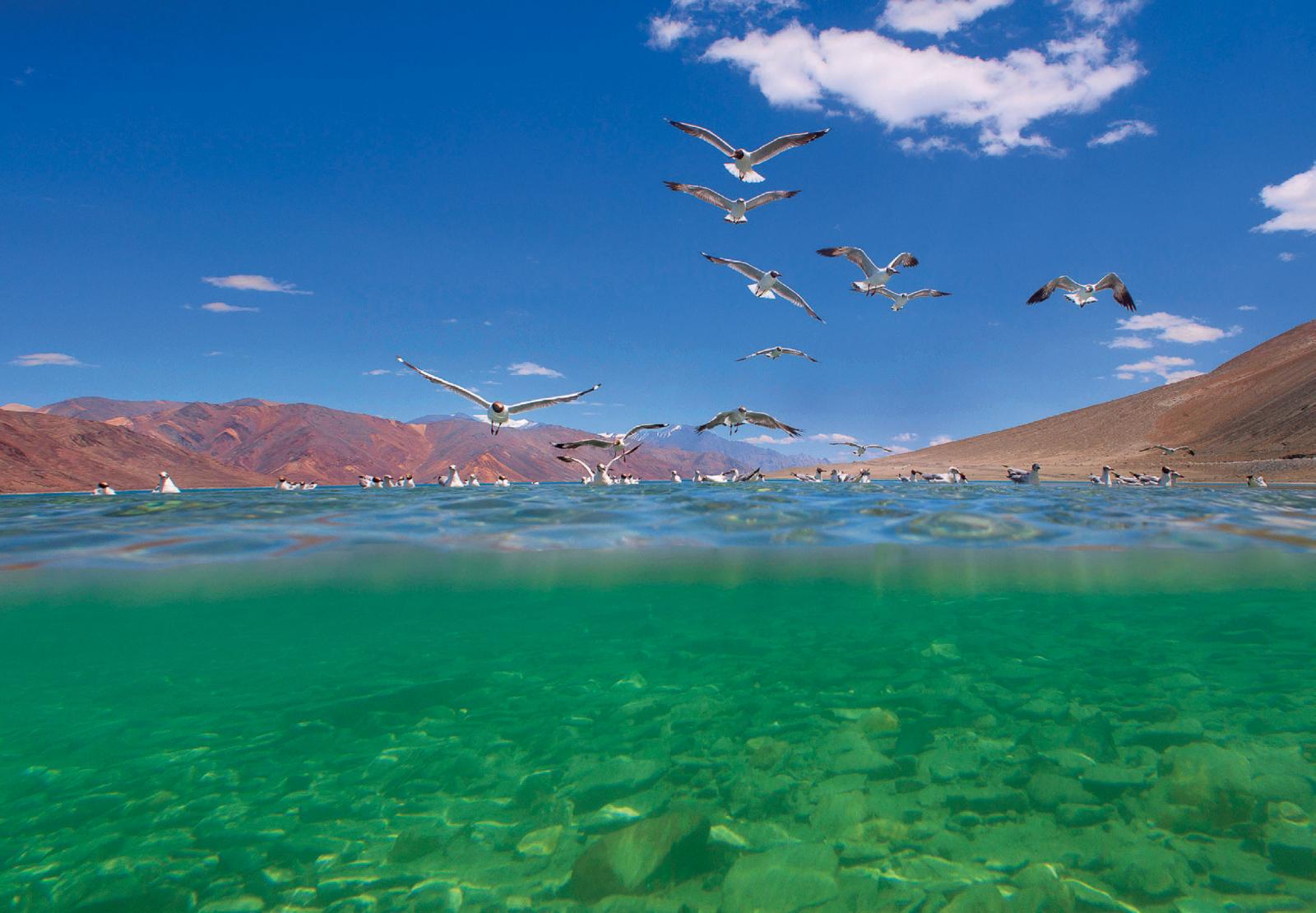 Winged Fire is Valmik Thapar’s paean to the birds of India, much like his earlier two in this trilogy, Tiger Fire and Wild Fire, which were to tigers and Indian wildlife. For anyone remotely interested in birds or even just curious, opening this book is like opening a treasure chest. It is crammed with observations of and encounters with birds—from Emperor Babur to Salim Ali to Ruskin Bond— as well as the most stunning action pictures of some of the most beautiful avians that do us the favour of living with us (no matter what we do to them).

Divided into three parts, ‘Book One’ has an introduction by Thapar describing his ‘enchantment’ with birds, be they great Indian hornbills, crows and tree-pies (letting him know where tiger kills are!), the birds of the desert, or the legends surrounding the peacock. Ramki Sreenivasan, ‘photographer and amateur conservationist’, describes some of his birding expeditions in his essay, ‘Bird Quest’, as he travels around bird-rich areas in the country. Happily, the usually ignored Northeast is given special prominence, and with its incredibly rich, bejewelled bird diversity (and their exotic sounding names), fully deserves it. But the birds of the Northeast also face major (seemingly ‘terminal’) problems: wholesale hunting and habitat destruction being the main. The ‘empty forest syndrome’ is one sad result of this. Easily the best story to come out of the Northeast is that of the Amur falcons, which migrated through the Intanki National Park and were slaughtered every year in their thousands. Once word of the massacre got around (or ‘went viral’, as we like to say) measures were taken to stop it. Political will and the efforts of conservationists paid off handsomely: in a single year, the slaughter was stopped dead in its tracks, which goes to show what can be achieved if we put our minds to it.

Other areas of the country that Sreenivasan covers include Uttarakhand, Rajasthan, Tamil Nadu and Kerala; his enthusiasm while on these birding expeditions is infectious, and you get a feel of what makes birders tick (and a bit barmy). While it would be virtually impossible for any one person to cover all the mouth-watering birding regions in the country, it would have been useful if other contributors could have been roped in to cover areas that Sreenivasan hadn’t. There’s nothing on the bird life of the Western Ghats or the Eastern coastline for example, or the Deccan plateau or the Andamans.

The second part of the book, ‘Encounters with Birds’ is a selection of writings about birds spanning the last five hundred years by contributors from Babur to birders, hunters, nature lovers and conservationists en route. Accounts of the bird hunts of yore—which really were nothing but wholesale slaughter and carnage—still make your stomach churn even as you force yourself to remember that in those days, hunting was the norm. Indian maharajas and the British, quite literally, had a total blast (with both animals and birds).

Some of the other contributors to this section include Malcolm MacDonald, Jim Corbett, Kenneth Anderson, Douglas Dewar, Rishad Naoroji, Ruskin Bond, Bulbul Sharma and of course, Khushwant Singh (with a wonderful tale of bulbuls flying around his head, asking him for protection).

But really, Book Three runs away with all the prizes. It has the best collection of ‘action’ shots of Indian birds I have seen anywhere. Indian bird photographers are on par with the finest anywhere, and now, equipped with cutting-age (and scalpel sharp) equipment, have produced results. Bird photography is demanding: you need patience by the barrelful, perseverance, lightning-quick responses and a sense of anticipation, and most of all the ability to be at the right place at the right time (with the right lens), which often means lugging heavy delicate equipment over impossible terrain over long distances.

It is one thing to photograph a bird on a perch or tree top, but quite another to snap a steeply banking peregrine falcon in flight at eye-level or an eagle making a kill. Yes, photographers have machine gun motor drives and tracking auto-focus, but they still have to be in position to press the shutter release.

It is also heartening that there’s no nest photography (apart from a sarus with her chicks—but they’re up and about), which has become furiously controversial as it’s claimed it often compromises the family’s security. Also, some bird photographers do diabolical things to prevent other photographers from taking similar pictures. What would have been nice is if the photographer’s credit were given alongside the picture—so we could have patted them on the back then and there—instead of a list at the end.

Birding is gradually coming into its own in India and a book like this can only be good news for it as well as birds. There are some astonishing observations in it—often made by ordinary people—which ought to encourage you to look a little longer and harder at birds. And then there is the treasure chest of photographs to delve through. At a shade under Rs 3,000, it may seem expensive, but that’s what you would probably pay for dinner at an average restaurant these days. The meal will be gone by the morning and might cause indigestion; this book can get you hooked to a lifelong passion that will never let you down.

(Ranjit Lal is an author and environmentalist)