Olga Tokarczuk won the Man Booker International prize in 2018. The Polish novelist is again in the running with an old-fashioned whodunnit 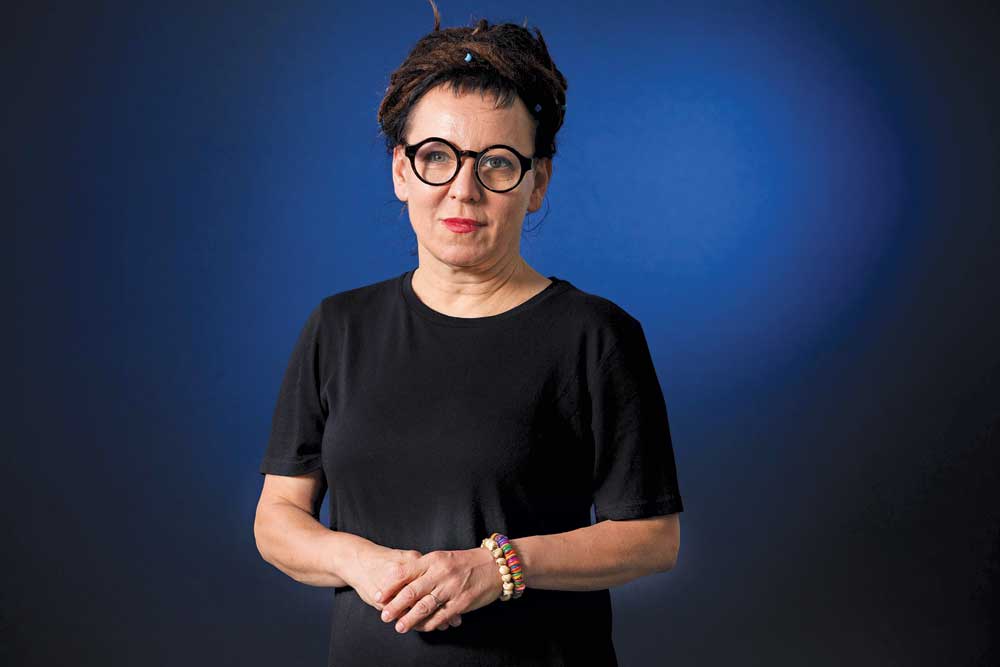 THE 2019 MAN BOOKER International shortlist was announced earlier this month—and fans of the 57-year-old Polish author Olga Tokarczuk were pleased to find her in the reckoning for the second year in a row, after her 2018 win for Flights, a decidedly unclassifiable book that’s part novel, part philosophical treatise, and a crash course in travels- of-the-mind à la Sebald or Pessoa. Her Booker nod this year is for Drive Your Plow Over the Bones of the Dead (translated by Antonia Lloyd-Jones; Fitzcarraldo Editions; 272 pages; Rs 1,090), a 2009 work translated from Polish by Antonia Lloyd-Jones. Structurally, it is a rather old-fashioned noir whodunnit set in a remote, difficult-to-reach village in south- western Poland’s K•odzko Valley (near the Czech border) whose men are being killed one by one. And, according to the protagonist, an irrepressible woman in her sixties called Janina Duszejko, the animals of the region are exacting bloody revenge upon these men for their egregious eco-crimes. What makes this book remarkable is just how much Tokarczuk packs within this basic whodunit framework— by the time the novel reaches its big reveal (and the twist is delicious, every bit as shocking as anything Miss Marple or Hercule Poirot encountered), we’ve been through thrilling mini-discourses rooted in eco-feminism, the ‘animality’ that Derrida and Heidegger wrote about, unconventional knowledge systems (Duszejko believes in the stars, for instance), the sociology of vegetarianism and the works of William Blake.

The novel’s setting is so inaccessible that the protagonist admits it’s not even on the map properly, just a bunch of houses atop a steep incline, often referred to simply as ‘the Plateau’. The scale of its isolation helps Tokarczuk create a kind of locked-room-mystery by proxy—and leads to occasional grim humour, such as when our protagonist’s initial radio call for help travels to the Czech Republic, thanks to its proximity and the scrambled signals at that altitude. Here our inimitable protagonist lives, spending her days looking after the houses of her neighbours (who’ve left for warmer climes during the winter), and translating the poems of William Blake alongside her former student Dizzy (the novel’s name is derived from a Blake poem and every chapter in the book begins with a Blake verse).

When her neighbour Big Foot is found dead, Duszejko is one of the few people who think that this was not a tragic accident. Soon, the local police commandant, a man she hates because of his apathy for animals (he thinks her to be a crazy old woman on account of her complaints against hunters/poachers), turns up dead at the bottom of a shallow well, hundreds of tiny hoof marks circling around him in the snow. Gradually, she (and the reader) begin to connect the dots between these deaths and the disappearance of her two dogs, which happened months prior to this.

At the heart of the novel lies a deeply thoughtful critique of a certain kind of male brutishness, manifested in hunting for sport—Tokarczuk correctly diagnoses this phenomenon as a quasi-religious belief in the inferiority of animals, a kind of ontological ‘distance’ between man and animal whose logical extrapolation is the idea that whether the aim is warmth, sustenance or base entertainment, every non-human creature is, well, fair game. Duszejko is vegetarian and hates the wanton hunting practices of the region’s men. Her beliefs—and her work translating William Blake—form the perfect backdrop for the grisly murders taking place here. Blake’s poems and paintings, of course, are littered with powerful animal imagery, from the tiger burning bright to the horse baying for human blood to the mythical Red Dragon, which inspired Thomas Harris’ eponymous 1981 novel about a serial killer who used custom-made fangs.

At the heart of the novel lies a deeply thoughtful critique of a certain kind of male brutishness, manifested in hunting for sport

In a passage, Duszejko expresses her horror at the Plateau’s newer houses sporting ‘pulpits’, elevated platforms built for hunting: ‘They were knocked together out of wooden beams, set crosswise; they consisted entirely of crosses. These grotesque figures had four legs and a cabin with embrasures on top. Pulpits, for hunting. This name has always amazed and angered me. For what on earth was taught from such a pulpit? What sort of gospel was preached? Isn’t it the height of arrogance, isn’t it a diabolical idea to call a place from which one kills a pulpit?’

According to Tokarczuk, the kind of man who builds a ‘pulpit’ is also beholden to what he perceives as the limitless powers of science and technology, the belief that superior technology will drive human progress like nothing else. This is close to what the writer Susan Bordo calls ‘the Cartesian masculinization of thought’, a kind of segregation of the inner, mental world and the outer, material world—which therefore leads to knowledge being divided along ‘masculine’ (reason-based, rational, measurable) and ‘feminine’ (instinctive, intangible, unknowable) lines. The Earth, often characterised as a nurturing presence pre-Descartes, was suddenly a masculine construct, full of ‘useful’ objects like trees and minerals, to be extracted ad infinitum with the help of technology.

Binaries like these are apparent when, say, Duszejko’s pleas for action against illegal hunting, fall on deaf, overwhelmingly male ears. The vehemence of her words bemuses them, as though she were speaking a different language, which as Bordo and other eco-feminist philosophers show us, she might as well have been. In a passage describing the irregular contours of the Plateau, Duszejko remarks bleakly: ‘There’s also a stony precipice nearby, but anyone who thinks it’s a natural feature would be mistaken, for it’s the remains of an old quarry, which used to take bites out of the Plateau and would surely have consumed the whole thing eventually in the avid mouths of its daggers. They say there are plans to start it up again, at which point we shall vanish from the face of the earth, devoured by Machines.’

In Tokarczuk’s sixth novel Flights (translated by Jennifer Croft, winner of the Man Booker International Prize in 2018), too, there are certain fragments where her disillusionment with tech- evangelism comes through strongly. In one of the novel’s standalone, essay-like segments (there are over 90 such sections in the book, some less than a page long, others extending for dozens of pages), the nameless female protagonist laments the university system’s lack of imagination and creativity.

‘Here we were taught that the world could be described, and even explained, by means of simple answers to intelligent questions. That in its essence the world was inert and dead, governed by fairly simple laws that needed to be explained and made public—if possible with the aid of diagrams. We were required to do experiments. To formulate hypotheses. To verify. We were inducted into the mysteries of statistics, taught to believe that equipped with such a tool we would be able to perfectly describe all the workings of the world—that ninety percent is more significant than five.’

Flights is a remarkable book that seems to be interested in everything, like the best novels so often are. Despite the fragmented, almost anti-novel structure, it presents a coherent, compelling worldview, one that challenges the reader to investigate all that is supposedly axiomatic about our world. And while Tokarczuk’s fame in Poland isn’t in doubt—in an increasingly xenophobic, right-wing political environment, her views are anathema to many, leading to public denouncements and even death threats—her English-language following is still a relatively recent phenomenon. A few weeks from now, if Drive Your Plow Over the Bones of the Dead wins the Booker (making her the first ever to win in consecutive years), her status as a pre-eminent voice of world literature will be beyond doubt.