Meeting a younger me through my bookcases 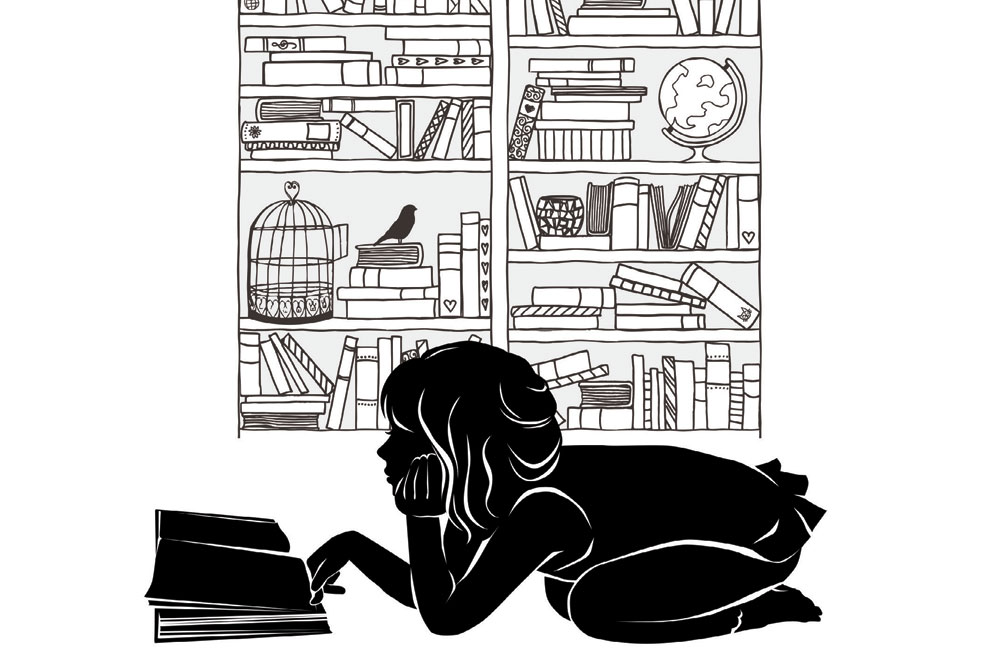 
ONE EVENING, OVER a month ago, I was sitting on my balcony in Bengaluru, far from my mother who lives in Pune. As the rumble of lockdown rumours in India started to grow louder, a lightning flash of clarity in my head told me that I needed to get to her immediately. I was fortunate to get a late night flight that I could afford. I threw things I thought I would need into a suitcase and raced to the airport.

My mother will be 91 years old soon and I was advised to isolate myself from her for a few days after reaching her home. For about five days, I kept to one side of the house and she to the other. It struck me how odd it was to isolate oneself from the most intimate body of all—the one that birthed you, the one inside which you grew and whose blood gave you sustenance, the one whose genetic makeup is coded within you to make you who you are. My mother was impatient with my caution but I was sure that I was doing the right thing and spent days and nights at a distance from her.

The room I was confined to is ‘my’ room in that it has my books and other random bits and pieces from my past. My parents and I have both moved house many times so what ‘my’ room contains is not a coherent or continuous record of my life, but there’s enough in here to give me glimpses of the person that I used to be. As the lockdown days have grown longer and more empty and the nights hotter, differentiated from one another only by the light of the moon as it waxes and wanes at my window, I have been thrown upon my younger self for company. I didn’t know it before, but that younger woman does haunt this room. Perhaps it is the silence and the stillness that has drawn her out, perhaps the newly padded paws of time and space have let me notice her presence and, as I surrendered to an unglamorous ennui, I recognised her.

I met this young woman first at the bookcases in our room. The cases contain an odd assortment of our reading life. There are fairy tales: Chinese, Japanese, Persian, Indonesian, German, Celtic, from Assam, from Madhya Pradesh. Some of these are part of a lushly produced Hamlyn series with glorious, complex illustrations; others are more plebeian and now, a little ragged. There’s a lot of Kerouac and Spike Milligan, the Durrells are there with Ian McEwan and so is Atwood, Drabble and Fay Weldon. I notice a lot of dead men but many, many living women. There are heavily marked up school texts: Eliot (beloved and wept over) and Hardy (resisted but never forgotten) and Lawrence (cautiously accepted). There’s an attempt to read poetry, it’s sincere but unadventurous.

As much as these books reveal a history of a young woman finding herself in the world, they also chart a geography of place and person. There are books soft with age, with split spines and yellowed pages acquired from the pavements of Bombay, each one precious for the carefully saved rupees that were paid for it. These were books that were bought together with the man I eventually married. There are books that are in better shape, from wellkept and organised secondhand stores in the UK and the US, there’s an occasional glittering hardback from a remaindered pile. If we put our minds to it, the girl and I can probably remember where we got each of those books. She remembers more clearly than I, of course, because she bought so many of them. My contributions to these shelves are fewer. I am disdainful of some of what she chose but equally, I hide a blush when she sniggers at what I have added to the shelves.

With that girl and her books, I re-entered the world that had once been mine. Together, we reach for Paulo Freire’s Pedagogy of the Oppressed and nod in agreement that a change was gonna come. We are shoulder to shoulder at Germaine Greer’s The Female Eunuch, humming along at The Complete Beatles Song book and squinting a bit at John Berger’s Ways of Seeing. She leads me back to a time when The Future meant hope, it meant progress and promised that change was always for the better and for the greater good. The hippies and their vision of a world united in a republic of flowers were but one lyrical memory away from her, the age of Aquarius had but recently dawned and the possibility of infinite good was within her grasp. Life was getting easier, it was likely that the world would produce enough food for every human mouth, diseases were being rapidly eradicated, technology was her friend and help meet, the women’s movement was growing wider and deeper and fighting for the rights of more than one half of humanity. The Vietnam war had ended and the last dominos of the colonial period were falling. Democracy held out the promise that it was the best of all political systems and voices from the Left could still rise in a clarion call that would be heeded by many. With that girl and her books, I re-entered the world that had once been mine.


As much as these books reveal a history of a young woman finding herself in the world, they also chart a geography of place and person

My generation inherited every capacity—wealth, education, potential solidarity—to make the world a better and brighter place. But now, we are faced with dysfunctional political and economic systems, a planet in deep distress, the disappearance of plant and animal species, perhaps the death of life as we know it. The young woman who stands beside me at the bookcase remains eternally poised at the cusp of a radiant tomorrow but 35 years later, I stand on the verge of crippling despair. The books that she read as paranoid dystopias (Orwell, Kafka, Huxley, Zamyatin) have become the gross and brutal reality of my time.

I feel judged by my younger self. Should we sit and talk, one of us so immaculate at the brink of a full life, the other shaped and worn by experience, by loss and grief? What should I say to her? Should I say, ‘Hello, I know you, but it’s been a while… remind me when we last met…’? Should I offer an awkward embrace which acknowledges the time that has passed between us? Should I look away as I recall all the things I could have done but didn’t? Should I feel a spasm of remorse for not being the person she thought I might be, should I apologise for promises unfulfilled and dreams woken from too early? Will she have words of comfort, solace, inspiration? Does my life make sense to her? Does my life make sense to me when I tell it to her?

The books that mark us, each from the other, become flagstones along the path of our hesitant conversation. With her by my side, I can revisit, if not regain, the idealism of my younger days. I’m not sure yet what it is that I offer her—perhaps my disappointments will show her that she has to make the world she wants for herself rather than expect it to be given to her. Perhaps she will understand that a universal republic of flowers needs a garden that is tended, weeded and watered, that our highest ideals are the most delicate of all plants, that our best selves need to be nurtured, trimmed and pruned regularly.

Now, after a month of shared space we have a tentative friendship, this dimly remembered girl from so long ago and me. But as I grow accustomed to her presence and renew my acquaintance with her, I realise that the other person who lives in the house—my mother—has always known and cherished the young woman who inhabits ‘my’ room. After all, she gave birth to her and to me.