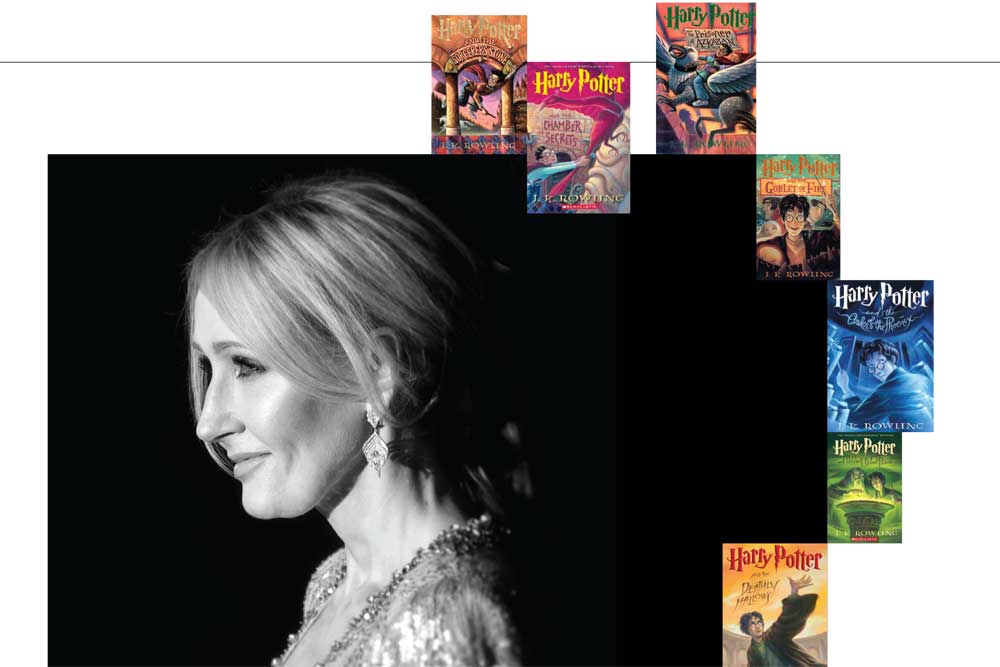 THE STORY OF one Joanne Kathleen Rowling has become almost as mythic to her legions of Muggle followers as that of the child wizard whose scar made him a legend in magical England even before he could walk. And with good reason, of course. Twenty years ago, Harry Potter’s first adventure introduced the world to hats that rhymed, wonky mirrors, turbaned professors, Quidditch, Bertie Bott’s Every Flavour Beans and that most magical of places, Hogwarts. We stepped through Platform 9 and 3/4s right alongside Harry, and we were just as awed with the world she built as the boy who lived in the cupboard under the stairs. Harry proved to be a great surrogate for Wizarding Britain, immediately lovable and endlessly brave.

Harry Potter and the Philosopher’s Stone did well on its debut, but it was something of a sleeper hit by the lofty standards of its own sequels. It sold a healthy 300,000 copies in the first two years of its release in the UK, and apparated over to the other side of the pond. After an unheard- of advance for the US rights to the book, evil plans were thwarted on both sides of the Atlantic, and a publishing phenomenon was born. Some estimates suggest only the Bible and Mao’s Little Red Book have sold more copies than the Harry Potter series. ‘Wildly popular’, then, is a bit of an understatement.

Of course, this enduring obsession is by no means inevitable, and a glance at the other preoccupations of the British Isles at that time (Tony Blair, ‘Cool Britannia’ and the Spice Girls) reveals more truthfully the ephemeral nature of fame in our times. That interest in Harry Potter and his creator remains feverishly high, that the fannish enthusiasm for new Potter morsels has not abated in the decade since the last book was published (no, Cursed Child doesn’t count and a bat-bogey hex on anyone who says otherwise), is a testament to the tremendous cultural impact of the books. Is it any wonder that publishers since have single-mindedly chased that quaffle?

Beyond its universal themes of love and loss and friendship, and the importance of standing against creeping darkness, Harry Potter made young adult fiction, that much-maligned genre, an unstoppable force. Though the first books were for middle graders, parents and older siblings (I speak from experience) also tore through the creative ways in which the Golden Trio managed to get themselves in trouble. With each new book, Harry’s world got grander, somehow more magical—and immeasurably darker. Despite turning back time, the Prisoner of Azkaban, the third in the series, subverts expectations and ends only sort- of-happily, before even that small comfort is yanked away in the Goblet of Fire, where the stakes become suddenly, brutally, terrifyingly real. After that, Harry can no longer be a child. And his readers, too, grew up by his side. The deeper questions of mortality, morality, trauma and depression the books explored didn’t just make Harry Potter a cross-demographic hit, it also exemplified how ‘children’s books’ could offer a nuanced exploration of the complex emotional realms we inhabit underneath the propulsive plotting that keeps the pages turning.

Soon followed the dystopias of The Hunger Games and Divergent, the sparkly vampires of Twilight and the terminally ill mortals of The Fault in our Stars. After Harry Potter, young adult became universal. In 2011, The Atlantic reported that in the 12 years since the first series was first released, the number of young adult books had swelled by 10 times. Year after year, annual sales statistics showed this genre was bolstering the entire publishing industry. It is, to borrow from another beloved children’s book, inconceivable to imagine a world where Harry had not sprung fully grown, like some sort of Medusa into Rowling’s mind. Because not only would we be without Hermione Granger, the first unabashedly ambitious— and not evil—girl I remember reading about, we would never have met Katniss Everdeen (from The Hunger Games)or, indeed, Mr Sparkles himself, Edward Cullen (of Twilight fame).

But spawning a boom in books for 8-17-year-olds wasn’t the only way in which Harry Potter transformed an entire generation’s relationship with pop culture. Fantasy as a genre crept out of the margins and into the cultural mainstream, and became popular to the extent that it is today difficult to find a pop-culture phenomenon that doesn’t in some way involve the extranormal, from Marvel’s stable of superheroic Avengers to the grim-dark post-zombie-apocalypse survival slog of one Rick Grimes. When The Philosopher’s Stone came out in 1997, Web 2.0 was but a glimmer in Geocities’ eye. We still navigated the world from Yahoo. But as Harry progressed through Hogwarts despite the best efforts of He Who Must Not Be Named, the geeks inherited that world. Corners of the internet were carved out and claimed Harry Potter readers and players of Dungeons and Dragons. The Web became wider, but the corner grew and grew, as if it was Aunt Marge under the influence of wild magic.

Harry Potter readers, you see, wanted to engage with the characters beyond what was in the books. They didn’t just want to find out what happened next, canonically, while they waited (and boy, was that a long wait between books four and five. Of course, these sweet summer children hadn’t yet made GRR Martin’s acquaintance.) for the next installment in the quest to vanquish Voldemort. They wanted to exchange impressions, discuss theories and perhaps duel over the many possibilities why Professor Snape was so mean to Harry. They could write about it, and about Harry and Hermione and Ron, and fill the blanks from the first war, about how the Marauders came together and broke apart. They could feud endlessly over whom Harry should and would end up with, romantically—if you were on Orkut in the early Noughties, you’ll remember that Teams Edward and Jacob had nothing on the Harry-Hermione-Ron ship wars. Something about the inspirational Potterverse and the interactive tools offered by the likes of Yahoo Groups and Livejournal produced an alchemy that saw an explosion in fan-created works, whether it was fiction, or art, or music.

An entire generation of fans believed it was possible to interact with the thing that you loved, to speculate and unpack and remake it as you wished. They could share their insights into the characters and their relationships; entertain alternative interpretations; examine new paths the stories could branch off into. These wouldn’t be definitive, of course, but they were signs of passionate engagement with particular creative works, constantly in dialogue with each other, even if not explicitly. Often, fandom conversations are politically, socially and culturally transgressive, questioning and challenging cultural norms. Harry Potter’s wide cast of appealing characters made it possible, for instance, for fans to not only spar over Harry’s potential girlfriend, but also perhaps a potential boyfriend (with archrival Draco Malfoy the most popular candidate), and to consider homosexual (or slash) relationships among his father’s friends, Remus Lupin and Sirius Black. Such works often examine era-appropriate attitudes towards sexual and other minorities. For many non-mainstream Harry Potter fans, the fandom was—and is—a way to write themselves (or some version thereof) back into the text. For other fans, it is their own King’s Cross platform, a portal into another world that they perhaps never dreamt existed.

But even Harry Potter couldn’t wave the Elder Wand and make fan fiction be considered less of a mockable curiosity and taken as more of a serious creative effort—or even as a genuinely enjoyable subgenre of literature. Perhaps that is the next great adventure: Rescuing fan works from the patina of unrespectability they have been unfairly tarnished with.