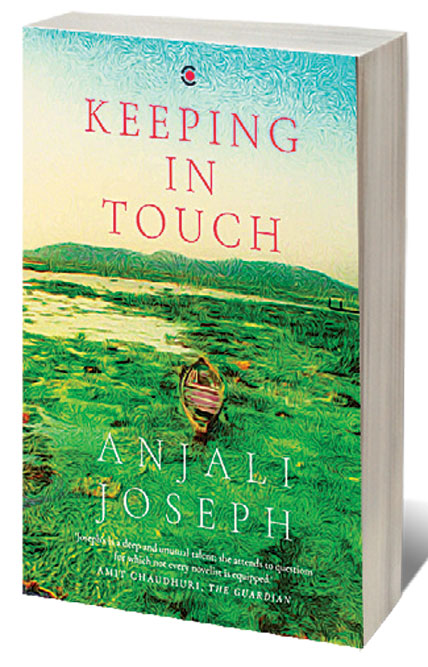 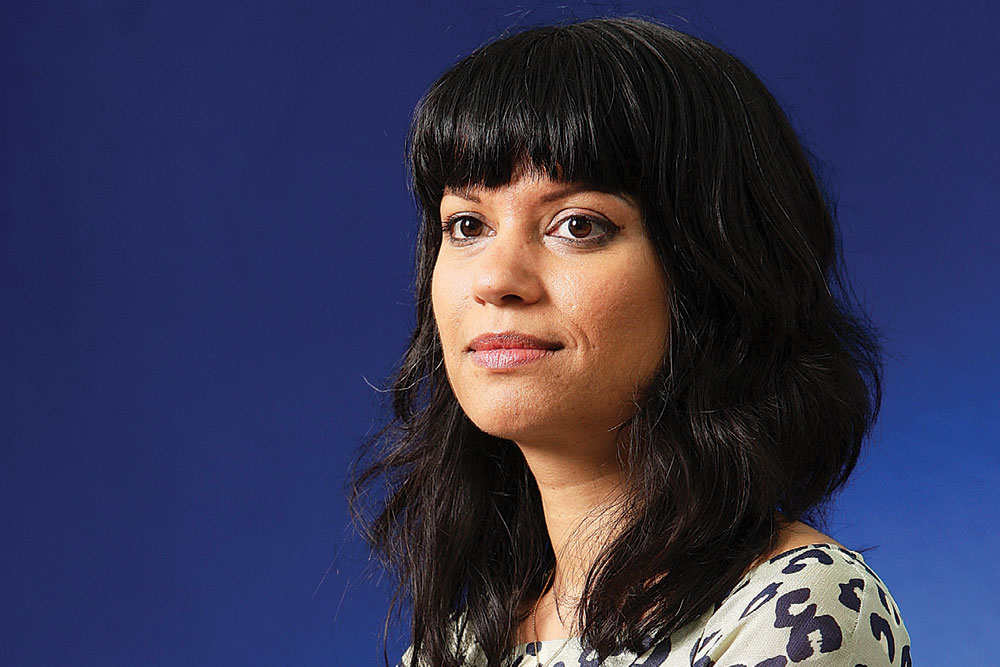 
ANJALI JOSEPH HAS the gift of writing from the perspective of the outsider. The accounts her protagonists give of their experiences in her novels manage to be wry, detached and honest all at the same time. This holds true from Joseph’s first novel Saraswati Park (2010), to her latest one Keeping in Touch (Context; 232 pages; Rs599).

Saraswati Park, for which Joseph won the Desmond Elliott Prize and the Betty Trask Award in 2011, is centred around a meditative letter writer, Mohan, and his reflections of his neighbourhood Saraswati Park, which is an oasis of calm in the bustling city of Mumbai. The novel also reveals the point of view of his nephew Ashish, a youth who moves in with his uncle, and is struggling with his sexuality. Joseph’s third novel, The Living (2016), is focused on two characters who, being on different continents, never meet, but are both in the shoe-making business. Keeping in Touch, like Joseph’s other novels, seamlessly switches perspectives of the protagonists, and has the same measured pace.

In this new novel, Ved, an entrepreneur, crosses paths with the designer Keteki at Heathrow airport. At first glance, they both seem similar and ready for a casual relationship. They are successful without feeling enthusiastic about their professions, aloof, with few close personal relationships, regularly travel from the UK to India, and they reflexively avoid commitment. Readers are told, “In the last few years, Ved had given up on having girlfriends. Instead, he’d behave slightly dismissively before he left or got them to leave…In an odd way, the more he liked the girl, the more he felt relieved after things ended.” Keteki, though far more cordial, shrugs off the men in her life just as easily. She tells a friend, “I see in myself this reluctance to get involved with anything seriously. There’s a fear of losing myself. It’s simpler to keep a distance.” The relationship between the two seems to be restrained to the titular phrase, keeping in touch, via WhatsApp. It seems as though it is Ved and Keteki’s initial reluctance for any real attachment that draws them to each other, as it is Keteki’s ability to evoke half-forgotten memories and feelings in Ved. In an interview, Joseph tacitly concedes: “I think a big part of it is timing; Ved is also very attracted to Keteki.” She goes on to say, “In my last novel, The Living, I wrote about two characters who barely travel outside their hometowns, but in this one, the idea of keeping in touch—with the other person, but also with oneself—naturally evoked itinerant characters.”

Although Ved seems more actively invested in their relationship, Keteki evokes more sympathy from the reader. It can be seen in Keteki’s connection with her home in Assam, and the more transient friendships she has with a host of other characters, who may appear briefly but who still leave a lasting impression.
This is especially apparent in her and Ved’s interactions with one of the few people Keteki trusts, her Joy mama. It is easy to see how the novel grew from Keteki’s character.

Keeping in Touch had originally been a short story, published in 2017, Everlasting Lucifer. It is now the first chapter of the novel, where the protagonists first meet. As Joseph remarks, “I wrote the story as a way into the novel rather than the other way around; I’d already been thinking about the character of Keteki and the setting made me come up with Ved.” There are many such stories, where two strangers meet, have an encounter, and move on, to meet or not meet again. In this one, Joseph succeeds in immersing the reader in the couple’s lives and interactions with others.

Like Joseph’s other novels, the settings of Keeping in Touch emerge as fully as a fleshed-out character. In Saraswati Park, the quiet and titular neighbourhood and its inhabitants, who Mohan observes from his window, makes as deep an impression as the vigorous, main streets of Mumbai itself. In Another Country (2012), the reader absorbs Leela’s experiences in London, Paris and Mumbai, and can feel her sense of alienation and belonging in each city. In The Living, the settings are not urban metropolises, but places with a quieter pace of life, such as Norwich and a small town in Maharashtra. It is in Keeping in Touch which fluidly and vividly switches from London, to the Himalayas, to Assam, to Mumbai, to Delhi, that Assam emerges as the clearest voice and personality.

The most lyrical descriptions in the book are in Assam. Just as the most striking images in The Living are the kolhapuri chappals that Arun makes, the image that comes most strongly to mind when reading Keeping in Touch is the landscape in Assam. Telling Ved about his garden in Jorhat, Joy mama says, “It is winter now, so you won’t see the number of birds in the garden that we have in summer. The kuli—the cuckoo. Even white cranes. We call them bogoli.” Ved and Keteki’s memories of walking together by the river come across more strongly than the times they spend alone by the rivers in England and the Himalayas.
The majority of the novel takes place in Assam, where the characters spend most of their time together. Keteki feels most at home there, although she adds, “I always feel more connected to Assam when I’m away.” Even Ved eventually shifts there to be closer to Keteki and his business venture. There are several discussions on this state, more so than in any other place in the book, and its politics and its history. It almost comes as no surprise, when several times, Assam is referred to as another country by some of the characters, in an off-hand way. Joseph comments on these casual references, but admits that they have some serious undertones. “It’s partly playful, but Assam has always had a very distinct identity and only officially became part of India under British rule.” It is apparent that Joseph’s novels are not only about unlikely people forming unlikely, but ultimately lasting relationships with each other. They also in part include the politics of modern India. Joseph points out the nature of these aspects saying, “Both things—relationships and politics—are pretty unavoidable, aren’t they?”

Though a lot of the novel is set in Assam, much of it is also focused on Ved and Keteki’s travelling lifestyle. Their lifestyles and professions mean that they are constantly in transit, and yet have an easy knowledge and connection with both India and the UK. Keeping in Touch is a modern novel about modern middle-class people for modern readers, many of whom will identify with Ved and Keteki’s calm acceptance of being Indians who are not truly rooted anywhere. Both characters are relatively free from any excessive angst of not really belonging to any one place. Readers will also mostly understand the casual nature of transient relationships in the novel without judging. After liberalisation, reality has changed a great deal for India’s urban middle class, and how they view relationships, especially long-distance ones. This is apparent in the novel and Ved and Keteki’s interactions. Joseph adds to this, saying, “I’m not a sociologist, but I guess that the use of smartphones has changed relationships and made them both more flaky but also more zombie-like in that they seem to take a long time to die.”

The constantly in-transit pace of Joseph’s novels mirrors her own life. Born in Mumbai, her family shifted to England when she was seven. She went on to teach in London and Paris, and these experiences seem to be echoed in Leela’s experiences in Another Country. She has had a varied career, training as a chartered accountant, and working as a journalist in Mumbai, and moving to Norwich. Commenting on what led her to venture into accountancy, she says wryly, “Accountancy was [for me] a youthful rock bottom.” These experiences and observations can be reflected in the layered nature of Keeping in Touch.