Mihir A Desai: Me and Money

Mihir A Desai reclaims the idea of finance through stories 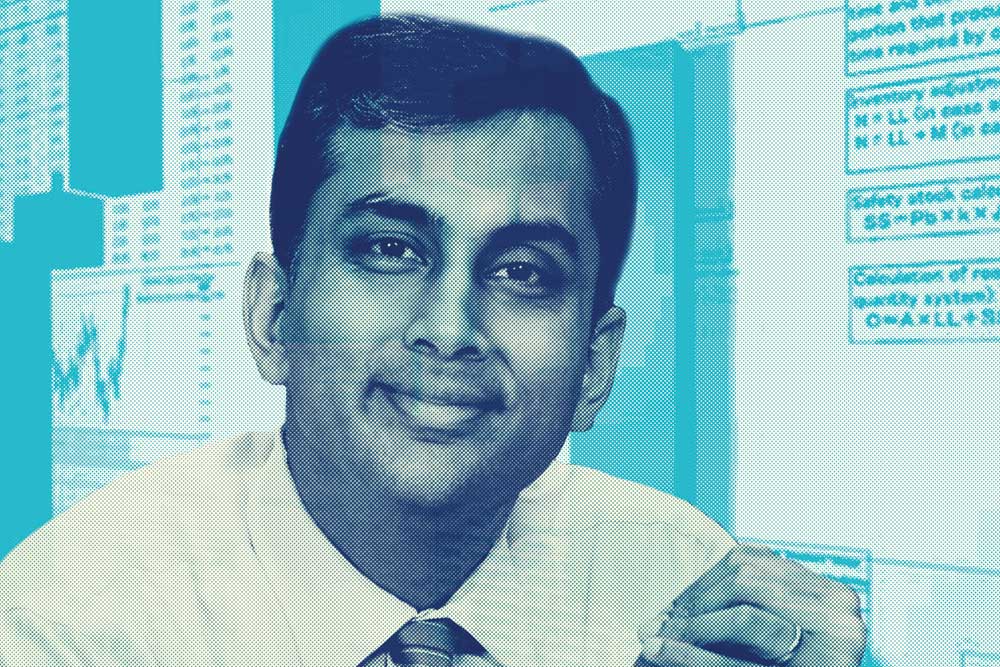 MODERN DEMOCRACY HAS its roots in the French Revolution and there are numerous reasons given for why the French people decided to take matters in their own hands. In The Wisdom of Finance: Discovering Humanity in the World of Risk and Return (Profile Books; 240 pages; Rs 599), Mihir A Desai, a professor at Harvard Business School and Harvard Law School, zooms in on an unlikely cause: badly designed insurance policies.

To finance its wars, the French monarchy had started taking lump sums from its citizens in return for which an annuity would be paid out for the rest of their lives. However, to get as much as possible, they started giving the same annuities to people of all ages; a five-year-old and an eighty-year-old receiving equal. The five-year-old however would live for many decades which made it a great investment for the young who overwhelmingly took to buying such policies, while the old stayed away. The book states, ‘By the time of the French Revolution, these annuities were the dominant source of financing for the government and the majority of annuitants were below the age of fifteen. These obligations created a fiscal crisis that led to the reneging of other debt that was widely held by the public. The resulting discontent, in turn, led to the French Revolution.’ In a sense, democracy owes itself to a faulty understanding of insurance by Louis XVI.

Insurance also had salutary effects at the micro level in society. For example, an unexpected inverse correlation to witchcraft. As formal insurance markets came into existence, sudden disasters no longer had the same terror for humans. Desai writes, ‘Several scholars have attributed the decline of the reports of witchcraft with the rise of insurance. Historian Alan Macfarlane notes that “punishment of witches was not merely for past offenses…[ it] was regarded as a prerequisite for healing from witchcraft and an insurance against future disasters”.’

To a question in an email interview over whether any such parallel phenomena have been observed in India, Desai points to caste. He says, ‘Many scholars have pointed to the central role of caste communities in providing insurance. And, in fact, scholars point to the absence of insurance markets as a major reason for the persistence of caste dynamics. As Kaivan Munshi puts it: “As long as income risk remains a prominent feature of the economy and as long as market insurance is unavailable, caste will continue to play an important economic role in rural Indian life.” So, there are many reasons to believe that the spread of insurance could help accelerate the decline of the caste system much as it undercut the role of witchcraft.’

Insurance comes right at the beginning of the book and there is a reason for it. Desai says, ‘The demands created by the omnipresence of risk are the core of finance, including insurance. But, the omnipresence of risk is also the fundamental human condition. In that first chapter I draw on the poet Wallace Stevens, the philosopher Charles Sanders Peirce and the author Dashiell Hammett as they all understood how risk was the defining characteristic of life. And, insurance in particular is this fantastically social mechanism where we deal with risk by mutualising that risk in communities. So, the logic of insurance is inherently social which leads many thinkers, including Peirce, to the opposite of greed.’

Finance needs to be demystified and the best way to do that is with stories. People outside of finance demonise it without understanding it and they need a way into the big ideas of finance with no equations and graphs, only stories

Finance today has a reputation problem. Its professionals are the highest paid cream of society but have a well-deserved reputation for wanton self-aggrandisement. It reached its apogee in 2008 when bankers almost brought about a global economic collapse. What Desai attempts with this book is to salvage the idea of finance. While not denying what its practitioners have been up to, he argues that it is the result of a flawed appreciation of what finance is about. Desai seeks to humanise the field and uses the humanities to end up with a critique of finance and a map for a virtuous life through it. For a book that deals with things like ‘capital asset pricing model’, ‘leverage’, ‘high beta’ and so on, the book is as close to a page turner as you are ever going to get. Desai is a storyteller who crunches literary works and extraordinary human anecdotes to gradually lead to his point. He speaks to both practitioners in the field and outsiders alien to the subject. He says, ‘Finance needs to be demystified and humanised and the best way to do that is with stories. People outside of finance demonise finance without understanding it fully and they need a way into the big ideas of finance with no equations and graphs—only stories—and the book tries to do that. People inside finance need to view their work with a moral lens so they aspire to better behaviour. We’re in a bad equilibrium—people demean finance and expect little of people in it and, unsurprisingly, people in finance behave poorly. We need to demand better and make them aspire to better behaviour and the book tries to show the way to that outcome.’

Risk management might not sound exciting to read about, but Desai talks about it using Pride and Prejudice and the choices that Lizzy Bennet and Charlotte Lucas make when they have the same suitor in Mr Collins. The former rejects him because he is not her desired pick even though she risks being unmarried. Charlotte accepts choosing ‘comfort over further risk exposure, while Lizzy chooses continued exposure in hopes of a romantic outcome’. Desai then takes us to another story, that of Violet Effingham in the novel Phineas Finn who, faced with a similar marriage question, dismisses the idea of the perfect match but has a pragmatic strategy of having enough choices first. Desai quotes her from the novel: ‘I shall take the first that comes after I have quite made up my mind… After all, a husband is very much like a house or a horse. You don’t take your house because it’s the best house in the world, but because just then you want a house. You go and see a house, and if it’s very nasty you don’t take it. But if you think it will suit pretty well, and if you are tired of looking about for houses, you do take it. That’s the way one buys one’s horses—and one’s husbands.’

‘In financial parlance,’ writes Desai in the book later, ‘this is tantamount to creating a portfolio of options and then choosing to invest in one asset at the opportune time. The portfolio of options allows you to wait until you are ready to invest and to see how these assets are evolving—far preferable to committing to one asset prematurely or waiting in the hopes that the “right” asset will come along eventually’.

Desai is a traditional economist and this was his first attempt at such a literary venture. ‘The process was characterised by long spells of reading and staring at a blank page and then 5,000 words would spill out of me. As someone who had a broad liberal arts education before doing my PhD, I was able to draw on some sources I knew but I also just followed my nose and did a tremendous amount of reading. So, the process was filled with these serendipitous discoveries of mainstays of literature—like Anthony Trollop and Violet Effingham—who actually give voice to deep financial intuitions,’ he says.

In his chapter on bankruptcy, Desai begins with the story of Robert Morris who funded the American Revolution and then refused the post of Treasury Secretary in order to rebuild his business after the war. Instead, he eventually ended bankrupt and in jail, leading the American government to reconsider the prevailing idea that when someone can’t repay his debts it is a moral and criminal fault. As a result of it, America brought in a bankruptcy law. Desai uses bankruptcy to bring in the larger idea of failure in life and how we should address it so that there is closure. He writes, ‘Rather than taking failures as occasions for self-flagellation, see them as opportunities for rebirth. Create some breathing room (an automatic stay), get help (from family, friends and professionals), and start looking toward the future instead of backward (author a plan for your recovery).’

It is a pertinent issue for India today as it grapples with a crisis of the non-performing assets of banks combined with a new bankruptcy law. He says, ‘The two lessons from finance about bankruptcy are i) the need to not stigmatise failure, and ii) the need to create speedy processes for renegotiating commitments when you fail. Two of the most important changes that India needs are for entrepreneurs and larger families to risk more and not be stigmatised by failure and to change the strategic incentives to behave badly once businesses are in trouble. Creating speedier mechanisms that ensure that bankruptcies result in the reallocation of capital as quickly as possible is critical in India.’

The book ends with Desai’s perfect role model for finance— Alexandra Bergson, the heroine of the 1913 novel O Pioneers! She is responsible for a family farm in Nebraska and three younger brothers. When land prices hit rock bottom and people are selling in panic, she ignores the advice of her brothers to do likewise and instead starts buying land. She raises funds for this by selling cattle and borrowing as much as possible (earlier, in the chapter on leverage, Desai explains why debt can be useful in the hands of a wise person; both to create self-discipline and for growth). Alexandra then does a market study by asking farmers around about their crops and livestock. She acknowledges the difference of opinion in her family and welcomes it. When she has finally made a fortune, she accepts that her own ability wasn’t entirely responsible and luck played a part. And her greatest happiness is not the accumulation of her wealth but that her youngest brother can go to law school because of it. Desai writes, ‘Alexandra Bergson is our ultimate finance hero. She is a master risk taker who knows how to assess risks through experience and imagination and how to use leverage to change the lives of people she loves…She knows how value is created and she knows that she is ultimately only a steward for the capital she is entrusted with…She is not addicted to risk-taking and does not develop insatiable desires. She remains invested in her deepest relationships with close friends and family.’

Bergson is everything that many in finance are not, especially those who equate more wealth with greater satisfaction. Markets relentlessly update them about their performance, reinforcing this belief. While failures are put down to adverse circumstances, luck, a major factor, is never acknowledged in successes. Finance thus leads to ‘unique feedback loops in combination with attribution errors to create lots of bad behavior’. The way out is by imbibing narratives, like those in the humanities, that insulate oneself from such errors. Desai says, ‘My next book is going to be a larger exploration of that question of why finance has gone wrong. And, I’m already starting on it, so I hope to have a fuller answer soon.’