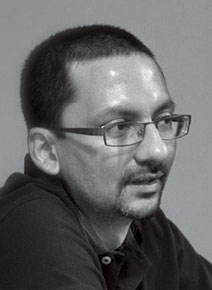 When three out of five cover blurbs for a novel mention Joseph Heller’s Catch 22, you could be easily persuaded that there’s something between those covers that deserves attention. Add Frankenstein, Heart of Darkness and The Island of Doctor Moreau to the mix on the cover and top if off with nods to Tarantino, M.A.S.H. and the Golem myth and the reader should be practically trembling with anticipation as s/he opens Saad Hossain’s first book, Escape from Baghdad!. The good thing about the over-the-top blurbs is that you know what you’re getting. Hossain’s war-cum-male-buddy-adventure novel gives you a reasonable dose of black humour, fantasy and absurdism. All in 280 pages.

Set in Baghdad just after Saddam Hussain has been deposed and US troops have moved in to find and eliminate the WMDs that would, apparently, hold the entire world to ransom, Saad Hossain’s story occupies an apocalyptic landscape where the centre has not held, power comes out of the barrel of a gun, small-time thugs, big-time warlords, religious fanatics and supernatural beings all have an equal chance of success and survival. Our unlikely heroes are Dagr, a retired maths professor and Kinza, a local hood. Along the way, Kinza has made friends with Hoffman, a cheerful young American soldier more interested in drugs and adventure than in the duties that his commission in Iraq has thrust upon him. As Dagr and Kinza develop strategies to keep their noses above water in the flotsam of their ruined lives, they are presented with a golden goose—a wanted man who could become the treasure they parlay for a safe passage to wealth and freedom. Their unexpected hostage is Hamid, a former member of Saddam’s ruthless secret police, reputed to be the most merciless torturer among all his brutal colleagues.

Within a few short (but action-packed) pages, Dagr, Kinza and Hamid have been overpowered by a pathetic auto-parts dealer and his ragtag band of followers and forced to track down the Lion of Akkad, a killer of mythical proportions— gigantic, unslayable, vicious—who is stalking the streets of the neighbourhood at night. As they enter that feral darkness, where a man is either the hunter or the hunted, gentle Dagr feels… ‘They did not belong here, and their convoy of three was disturbing the routine of the regulars. Dagr felt men shuffle close in the darkness, veering off in tangents after a sniff, split second decisions demarking victims and victimisers. Dagr too felt infected with their mindless aggression, heard whimpers and ragged wet tears from far corners, felt with shame some of the exhilaration of walking the night with a gun.’

The encounter with the Lion, in which our protagonists are implicated in the killing of the local religious leader’s son, leads into stranger and stranger territories, histories and geographies of the present, the past and even the future. The narrative bounces like a super-ball within a city divided between Shi’a and Sunni, Baa’thist and Druze, believer and non-believer, soldier and civilian. It bursts at the seams with characters, plots and subplots, conspiracies, magic and eventually, utter mayhem. We meet a reclusive alchemist named Avicenna, his lush-bodied but cold-hearted granddaughter Sabeen, Hoffman’s personal posse of infantilised soldiers and moronic superiors, sequestered librarians, witches who live with djinns trapped in jars, corrupt doctors who experiment madly on the incarcerated insane. These careening, skittering plotlines, remote-controlled by a watch that seems not to tell time, come together in a final, exhausting bloodbath. Somewhere in there is a dimly visible meditation on violence.

In Escape from Baghdad!, you will hear echoes of Catch 22’s tragi-comic absurdity, you will see Frankenstein’s long shadow, you will be numbed by Tarantino-style bone-shattering, blood-spattering violence. Hossain is like a kid in a candy store, reaching for everything that catches his fancy, never mind the indigestion that might follow. These seemingly disparate elements are held together by his clever plotting, his vast swathes of information that encompass both modern weaponry as well as medieval alchemy and his easy use of language. However, some of Hossain’s stroke are just too broad. Hoffman, for example, does not ring true, not as a realistic character nor an absurdist one. Dialogue slips into unlikely Americanisms, similes are stretched—Hamid is described by the omniscient narrator as ‘the number 10 of all 10s, the 23 of all 23s.’ O dear, is this really a boys’ book? By its end, ‘Baghdad’ proves to be exactly that. I’m sure there are enough boys out there who will enjoy reading the book as much as Hossain enjoyed writing it.