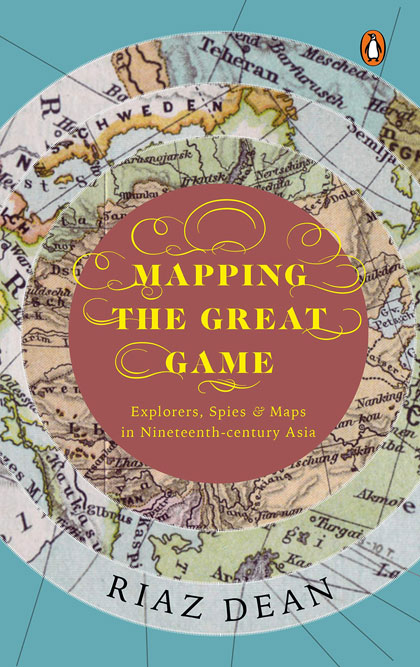 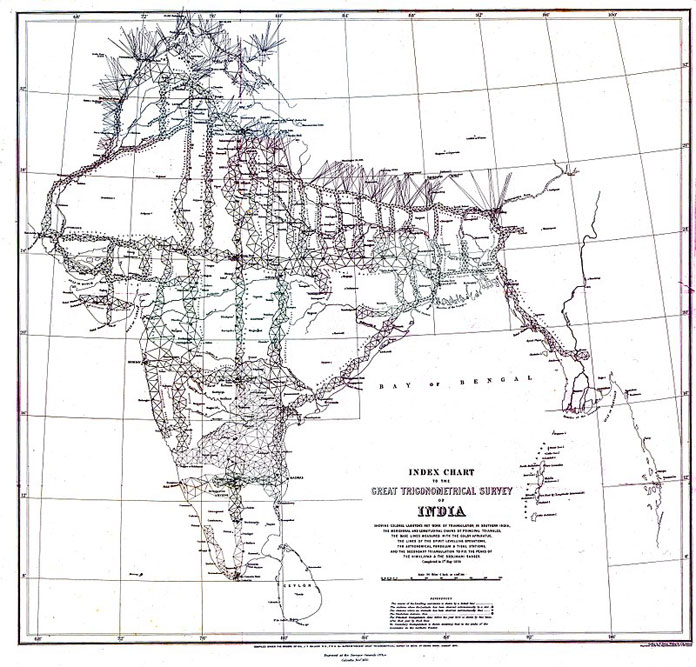 A map showing the triangles and transects used in The Great Trigonometrical Survey, produced in 1870


The constant power struggle between the British Crown and tsarist Russia—two of the biggest empires back in the day—reached its zenith in the 19th century. At stake was the sole motivation of annexing territory while expanding the scope of their reign. It was a tussle fraught with all kinds of danger and earned the reputation of the Great Game.

While there were plenty of prosperous kingdoms and obscure khanates to choose from in the vicinity, things came to a head when the Russians trained their sights on India. Even before taking over the reins from the East India Company, the Britishers had come to realise how vital this prized possession was to their economic interests. The moment they got wind of Russia’s intent, it was clear that their colony had to be defended.

Riaz Dean’s Mapping the Great Game is a well-rounded summary of the machinations of the two giants and the subsequent repercussions of their actions.

Even as Russia called off its first aggression in 1801, the British started taking stock of their territory under the Great Trigonometrical Survey. Through tedious efforts while mapping over 1,600 miles across the length of India, they finally arrived at the northern borders, where they now stared at the distant high mountains, eager to learn what lay beyond them.

While surveying Indian territory presented its own challenges for the British, there was comfort in the fact that this was still their own domain. Outside of their borders though, it was an exercise laden with risks that started with enduring the wrath of nature in desolate terrains where only the fittest survived.

At the heart of the narrative are intrepid British soldiers, who sought adventure and embraced the uncertainties that came with it, as compared to sitting easy in safety amid their troops.

As early as 1811, William Moorcraft set out through unknown territory on the pretext of buying the fabled horses of Bokhara to bolster the British cavalry. Over time, others followed in his footsteps, finding their own reasons to take on such perilous journeys. When the impending Russian threat was understood to arrive overland from the north-west, it became imperative for the British to seal any approaches from that direction.

Time and again, alliances were made and broken, as the British looked to secure their position amid kingdoms in Afghanistan and Persia, which fell along the route that the Russians were likely to take. But when they tried to understand the lay of the land beyond these territories, they found the maps of Central Asia and Tibet to be insufficient, resulting in an era of exploration that was now vital to their survival.

When British officers set out on surveillance missions, they realised that maintaining cover was quite a task. Captain Thomas George Montgomerie had observed the ease with which locals from India could hop across borders and soon trained a few natives in route survey, asking them to record their observations along the way.

It gave rise to the age of Pundits—local men in disguise, who joined various caravans that set out for distant lands. Their safety was as uncertain as their return date, but whenever hardy men like Nain Singh and Kintup returned home after braving hundreds of miles of unchartered territory, they handed over invaluable information that helped the British fill in these blanks on the map.

The Russians on the other hand had their own set of military generals, who led campaigns to claim as much territory as possible in Central Asia to get close to India. Despite repeated attempts, they succeeded in getting only as far as Western Turkestan, while China was left with Eastern Turkestan across the Pamirs. Though the British tried to broker peace with the Russians on a few occasions, the mistrust between the two behemoths was apparent, as smaller players bore the brunt of their relative insecurities time and again.

The turmoil that lasted for over a century was eventually brought to a halt by the Anglo-Russian Convention in 1907, which ended a magnificent era of reconnaissance that was intriguing due to its sheer rawness.

Given that most of the chapters of the book are separate volumes in itself, Dean manages to pull off a lucid narration of a rather complex account with twists and turns aplenty. For those familiar with these plots, the book could be a repetition, though an organised timeline could bring new insights. But for those who draw a blank at the mention of the Great Game, there couldn’t be a better way to get started.