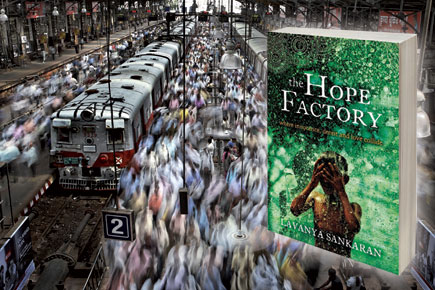 
The point at which a novel set in India resorts to the descriptive crutch of spices is usually the point at which I begin sliding into a familiar despair. In Lavanya Sankaran’s The Hope Factory, that point arrives—amid a flurry of other clichés—rather early, in the outrageously unoriginal sentence: ‘The air was redolent with spices.’ As a result, the majority of my relationship with the novel has been one of resistance—my resistance to reading it. I couldn’t get through it. I disclose this because I generally mistrust reviews that seem insufficiently compassionate. But the optimism with which I usually approach a book—somewhat inflated in this case by the glowing reviews on the book jacket and elsewhere of the author’s earlier collection of stories—was swiftly eroded by grumpiness at how stale it seemed.

To be fair, this is not the sole fault of this book; it is not so exceptionally bad as to merit such curmudgeonliness. It was more a trigger for the exasperation that has been building in the mind of one reader for the better part of a decade. Reading this novel feels like re-reading almost any other well-intentioned hope-and-grit spectacular to come out of India in the last decade. Harsh circumstances and humble characters struggling in an amoral world. A strained, pouting sympathy for Poor People and Their Problems.

This is the sort of novel in which one of two main characters—Kamala, a poor single mother who works as a housemaid in the home of the other protagonist: educated, middle-class factory owner Anand—is introduced pondering ‘the art to the purchase of an onion’. Shortly thereafter, her son suffers a simile which ends with ‘like a starving puppy’. This is the sort of novel in which a character’s success is described as his managing to ‘pull himself out of the primordial slime’, and the Indian Government as ‘a strange, cavernous beast that lay hidden in grottoes and leapt out, tentacles flailing, suckers greedy for bribes’. I could go on, but I can’t bear to.

You’ve read this book before. I have too. You might like to read it again, if it’s your cup of tea. I, for one, am tired.

I don’t want to read it anymore. And, to be clear, I don’t just mean Sankaran’s novel, which at times betrays some of the pleasant quirk and wonderful eye for silliness visible in her generally superior collection of short stories, The Red Carpet. It is unfair to vilify Sankaran for performing the perfunctory—and presumably lucrative—song-and-dance of contemporary South Asian literature. Aravind Adiga’s Booker and Danny Boyle’s Oscars have guaranteed a market for endless iterations of a certain kind of Third World Fable, so it seems we must all be White Tigers and Slumdogs now.

Mohsin Hamid’s recent How To Get Filthy Rich In Rising Asia might be read as a kind of self-conscious, parodist template for this kind of novel. It too draws from the same well of cliché, but is narrowly rescued from formulaicness by its explicit construction as a formula. Which is a relief, because criticising this kind of novel for its hollowness feels almost as passé as the novel itself, so the only thing left to hope for is that it achieve some measure of self-consciousness—a self-consciousness The Hope Factory lacks, wearing its unfortunate title without a hint of irony.

A recent essay published by New York-based journal n+1 titled ‘World Lite’ indicts a certain kind of ‘global literature’ for, well, a lot of things, but its central lament, as clarified in a follow up—‘“The Rest Is Indeed Horseshit”, Pt. 6’—is ‘the difficulty of writing honestly for a sociologically narrow “global” audience’. If one were to be generous to Sankaran and her ilk, one might attribute the essential hollowness of their writing to this ‘difficulty’.

But it is hard to shake the sense that the Third World Fable is calculated to suit a certain global audience for literature, an audience that n+1 argues has undergone ‘a geographical broadening, combined with a social thinning-out’ as part of ‘a change in historical situation’ that has served to encourage writers ‘to leave intact, rather than confront, the ideas of the other so-called global citizens who mainly read them’.

This global audience is composed of a collection of ‘thin-sliced national audiences, stacked together’. These ‘thin slices’ are plainly of a certain class, and it seems they hanker to read about The Other Half. How else to explain the recent surfeit of Third World Fables? How else to explain the insistence—expertly phrased by Poorva Rajaram and Michael Griffith in a rebuttal to n+1 published in Tehelka—‘on ventriloquising the poor’?

In a 2009 essay for Foreign Policy, Chandrahas Choudhury wrote: ‘It is in the details presented and the others left out, that any novel reveals the quality of its engagement with life and the presumptions it makes about its audience. All too often these days, the slice of Indian literature available to Western readers is at once too specific—excelling in stating the obvious—and not specific enough. The “global novel” has had to make many compromises to ensure its dominion.’

One such compromise, Choudhury indicates, is of observed detail in favour of banal generalities. Sankaran is irritatingly prone to these. In a column titled ‘Can India’s new laws stop rape?’ for The Guardian—the sort a new novelist inevitably seems to write for an international newspaper around the time of her book’s release—she makes several attempts. ‘India is rather keen on framing laws.’ ‘This is the ultimate Indian irony: an obsession with pronouncing upon human behaviour and codifying it in official edicts.’ ‘Driving on an Indian road is the best example of this: road rules are there to be disdained.’ ‘Real change in India begins and ends with social pressure.’ And cutest of all: ‘In India, we have a regrettable tendency to treat laws as mere suggestions, like worthy advice from a grandmother.’

All of Sankaran’s writing has this air of musings from a fresh-off-the-flight phoren–return Indian, nose in a perpetual wrinkle at the usual line-up of awful roads, smells, crowds, bureaucrats, politicians, thugs, leches and so on. I am not arguing for a gloss-over; I am merely tired of this worn litany of wide-eyed laments at Poor Chaotic India, tired of seemingly meme-generated phrases, tired of novels assembled like Subway sandwiches from a fixed number of familiar ingredients.

The determined middle-class man provides the foil for the corrupt chaotic country; the poor woman demonstrates that the author has conscience enough not to write about her own life (because that is not Real India, you know); the child at risk of being waylaid to a fate of ‘no school, no English, no office’ is the future of the country and the emotional stakes of the narrative; the city forms the backdrop, forever illustrating the collision of tradition with technological modernity; and there you are, all set up for a tour-de-force of #thirdworldproblems.

The novel hinges on our hand-wringing suspense over whether and how the characters will be saved from peril in perilous India. It feels manipulative. It does not come across as an earnest attempt—and here I must resort to blurb-speak—to seek redemption amid the merciless chaos of a contemporary Indian city, but a point-proving exercise grounded in placid cynicism: this is India. How awful it is. How unfortunate its people.

The world is everything that is the case, sure. But this is a bizarre kind of voyeurism. This is looking smugly through the peephole of education and privilege into ‘the world’ and patting oneself on the back for accurately characterising it, for being able to sum it up in so many words, to lay it bare and walk away, as though the mere act of documentation constitutes a resolution for whatever conflict is observed.

In several interviews, Sankaran has cited as inspiration the unnamed maid she once fired for “repeated absenteeism” and her son (the maid’s) who shot Sankaran a look of resentment as he walked his mother away. Sankaran seems to have written her first novel at least partly as a sort of imagined redemption for this event.

This, to me, is the real story: the acrimonious (or upsetting, or simply uncomfortable) encounter between wealthy writer and poor subject, and the writer’s attempt to resolve it through fiction. For such an attempt to be meaningful, the writer’s own appearance in the narrative is imperative. This novel ought to have been a mirror. It is instead a window. Sankaran’s failure is that she describes (and deconstructs) only the view, not the viewer.

In an interview with BusinessWorld in July, Sankaran described part of her daily writing routine thus: “After breakfast, I go to the neighbourhood coffee shop; it’s right next to a medical college and always bustling. For some reason, that colour and noise helps me write. I plug in my iPod, keep the volume on low, sip my coffee and plunge into my writing.” This vantage is palpable in her novel: a writer removed, riskless, writing in a bubble, sealed off from the ‘colour and noise’ that are both her subject and inspiration, but not her experience.