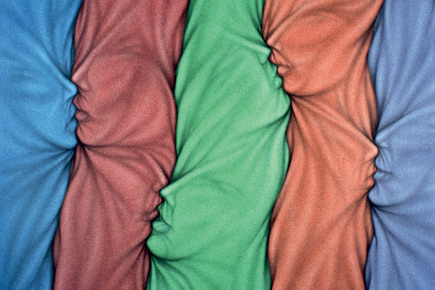 
There’s a thick border wrung with barbed wire that separates the erotic from the pornographic. This is something I’ve come to believe more strongly ever since I was asked to edit India’s first anthology of women’s erotica a year ago for Zubaan, India’s leading feminist publishing house. I’d jumped at the offer and within a month had already received 20 confirmations from contemporary women writers. Six months later, the search began for pre-modern erotica by women. Most of it, we realised, was written within the space of the devotional, by saint-poets like Andal, Meerabai, Akka Mahadevi and Lal Ded. Then, one evening, I managed to find a copy of Women Writing in India, the two-volume collection edited by Susie Tharu and K Lalita. As instructed by a colleague, I flipped through the contents page and found my way to Page 116. I found the name I was looking for: Muddupalani. What followed was a brief biography and two excerpts from her epic narrative poem Radhika Santawanam (Appeasing Radhika or The Appeasement of Radhika) translated by VL Narayanarow.

If you happen to read the extract without first leafing through the brief introduction that precedes it, you wonder, like I did, who said this, and to whom. It is a sensuous piece of poetry, context notwithstanding. When you realise later, as I did, that this bit of poetic advice was actually dispensed by Radha to her lover Krishna before he could consummate his marriage to Ila Devi, his young bride and Radha’s protégée, the poem acquires a greater significance. To think that this extract is a small fraction of what must surely be a magnum opus is humbling to any writer or reader of erotica. There is a touch of the contemporary in the tone, despite it having been composed in the 18th century. There’s a vitality in the voice, a confidence that’s absent in much of what goes around as erotica in the 21st century. What’s remarkable, though, is how effectively Muddupalani endows Radha with agency by characterising her not just as a sexual being but a sexually experienced one. As a reader, it’s hard to contain your desire to know more, to read the Telugu poem in its entirety, to have access to more than just two extracts.

Greed took over and I found myself desperate for more. I searched online and chanced upon a link that took me to the Penguin website, where I learnt that an English translation The Appeasement of Radhika by Sandhya Mulchandani would soon be available.

The story of the publication of Radhika Santawanam is as intriguing as its content. To start with, Muddupalani borrowed heavily from her own sexual experiences as a courtesan and bhog-patni to Raja Pratapsimha of Thanjavur (AD 1730-1763). In her introduction, Mulchandani tells us that Muddupalani’s grandmother Tanjanayaki (who had adopted Muddupalani’s father Muthyalu), too, had been the king’s consort, but was displaced by Muddupalani. A few years later, however, the king renewed his attention towards the older woman, and the young and petulant Muddupalani is said to have become progressively jealous and taciturn. The king had no choice but to appease her. Radhika Santawanam is a strange reversal of the dynamic wherein Muddupalani’s sympathies lie more with the older woman, Radha, than with the new bride Ila, although both come across as extremely intellectual and strong women. But the sentiments articulated are the same: betrayal and jealousy.

Muddupalani was well versed in all the nine rasas. Radhika Santawanam was composed in the sringara rasa and was written within the prabhandam genre of Telugu poetry, which was introduced in the 16th century by Krishnadeva Raya. It has its roots, though, in 3rd century dramaturgy, wherein quarrels between lovers usually centred on sores of rival affections, long periods of separation, or disinterest on the part of the man, all of which gave the woman the right to be angry, and, thereafter, appeased. The quarrel usually ended in sexual union. Muddupalani, we learn in her own introduction, was inspired to write the poem when Krishna appeared to her in a dream.

But Muddupalani, like so many women writers across the world, eventually became an obscure name. While Jayadeva’s 12th century classic Gita Govind, which speaks passionately about the intimate exploits of Krishna and Radha, came to be immortalised through the Bhakti tradition, Radhika Santawanam faded into oblivion until it was rediscovered and republished by the legendary patron of Carnatic music Nagarathnamma Bangalore in 1910. She first heard of Muddupalani in an early commentary on the Tanjavur period of Telugu literature, tried to get hold of the original, and managed with great difficulty to finally locate a copy which was poorly printed and hard to read. She wasn’t the only one intrigued by Muddupalani. In 1855, an eminent Telugu scholar, Charles Philip Brown, had turned over a manuscript of Radhika Santawanam to the Oriental Manuscripts Library. The manuscript had been annotated and printed in 1887 under the supervision of Paidipati Venkatanarasu and was reprinted in 1907. But Venkatanarasu was squeamish about the more erotic passages in the text and chose to drop them altogether. He decided also to omit the passages in the introduction where Muddupalani gloats about her lineage and position.

Nagarathnamma found this edition distastefully clean compared to the original palm-leaf manuscript she had managed to obtain. She set out to publish it herself. Strangely, a work that was not in the least bit controversial when it was first written suddenly became the subject of a scandal when it was published 150 years later by Nagarathnamma. Kandukuri Veerasalingam, a noted literary critic of the time, wrote a scathing review and panned it for its overtly sexual tone. He didn’t stop there, he also called Nagarathnamma an adulteress and a prostitute. She was not to be deterred. She responded to his allegations with a fierce rebuttal and exposed the double standards with which her society regarded male writers in comparison with women. “Does the question of propriety and embarrassment apply only in the case of women, not men?” she said, and championed the cause of the book, calling it a classic and asked why it was that men who wrote erotica were not just accepted but appreciated, while women who wrote sensuous poetry were called immoral and their books banned.

Veersalingam’s squeamish response found resonance with the British Victorian sensibility. Legal experts in Britain were soon consulted, who interpreted obscenity as anything that could adversely affect public morals. Under Section 292 of the Indian Penal Code, the book was banned and the publishers’ offices were raided. It was only after Independence that the ban was withdrawn by Tanguturi Prakasam, then the Chief Minister of Madras.

In the light of more controversial modern works, it’s difficult to see what all the fuss was about. Fortunately, the modern reader is in a position to read and evaluate all 584 verses for herself. While Mulchandani’s translation doesn’t have the smooth and contemporary cadence that VL Narayanarow’s version does, it retains at least some of the candour that must have marked the original. Of course, a lot must be irrevocably lost in translation and Mulchandani doesn’t hesitate to tell us so. Still, the reader is overwhelmed by the force of Radha’s sexuality. In fact, the third section has Krishna complaining in jest about how Radha insists on making love even when he doesn’t really want to. ‘No other Telugu poet—man or woman—has written about a woman taking the initiative in a sexual relationship,’ Tharu and Lalita inform us in their introduction to Women Writing in India. In another section, Radha even refers to men as inconsistent, impatient and unreliable. The last section is redolent with descriptions of Radha’s anger at Krishna’s betrayal and renunciation of her for his new bride Ila, who had conveniently made him swear to give up Radha right as she was about to lead him to an orgasm. Radha’s anger is not playful. It isn’t emotional blackmail. It is genuine. When Krishna falls at her feet to implore her mercy, she raises her left leg and kicks him ‘with brute force’. It is only when Krishna responds to that violent gesture with self-deprecating humility and tenderness and woos her with poetry that she finally relents and allows herself to be mollified.

English readers will possibly never experience the full impact of the original Telugu. Nonetheless, Mulchandani’s translation exposes us to a side of both Radha and Krishna that we’ve probably never encountered before. Radha as feminist, as a sexual woman caught between her love and desire for Krishna and her unhappy familial situation. Similarly, we experience a more guilt-ridden Krishna who’s caught between societal convention, which makes his relationship with Radha illegitimate.

Though the text is peppered with indications of Krishna’s divinity, the narrative steers clear of elevating the passion between Radha and Krishna to a spiritual plane. Perhaps this explains why Radhika Santawanam hasn’t been as successful as Jayadeva’s Gita Govind. The focus is astutely on the fact of Radha’s anger. She is the protagonist.