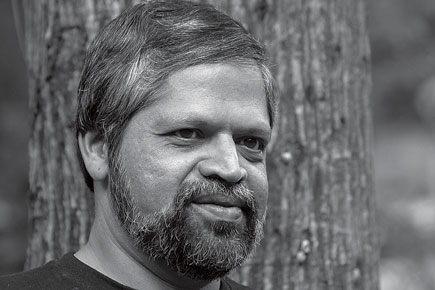 There are two seamen at work behind the English translation of Aiwa Maru, the best-selling Marathi novel about a doomed ship. Novelist Anant Samant had a varied career at sea before he came to writing. His vast experience working as steward and navigator on various kinds of ships is reflected in this novel, whose lyricism and drama is translated ably by Prashant Pethe, a seaman turned filmmaker, into English. The eponymous Aiwa Maru is a ‘rusted, dead mass of steel’, condemned to the scrapyard, but she has been resuscitated with a new coat of paint and a new name. Against all good judgment, she is put to sea in a voyage from Hong Kong to Yokohama, the story of which is narrated by Second Officer Samant.

The salty, happy-go-lucky life aboard changes in subtle ways when a woman arrives on the ship. Ujjwala is the wife of the talented and cocky Second Engineer, Deepak Upasani, the man whose job it is to make sure the decaying engines of the ship continue to work. Naturally, she is ethereally gorgeous (with tawny green eyes that made me roll mine). Upon Deepak’s insistence, she dresses in revealing Western clothes. Within minutes, everyone aboard, or so it seems, is in love with Ujjwala.

But Ujjwala, after that perfectly predictable beginning, surprises. The virtue and charm that she radiated upon first arrival transforms into something complex over the course of the novel. When Samant tries to sell her a fairytale in which dead seamen turn into seagulls, she gives him a piece of her mind, revealing for the first time that she has a mind: ‘Whether it’s the seagull’s body with its bright white wings or a seaman’s muscular body taking the waves on his chest, it is the body that gives meaning to the existence of the spirit… All you seamen, with all the romanticism of the moon, what are you looking for when you go out in the ports? Luscious, warm, naked bodies, isn’t it?’

Bodies are central to this story. There is, of course, Ujjwala’s body, and the temptations it represents. But there are other bodies in Aiwa Maru. The body of a dead sailor, buried brutally at sea after a horrific accident. The bodies of men sleeping with each other, using each other like pawns. And then there is the body of Aiwa Maru, that ageing,rusty carcass with its leaky steam pipes and boiler problems. In Samant’s writing, these very different physicalities merge into each other, into one obsessive, claustrophobic body of longing.

Early in the story, the narrator Samant tells the young cadet, Sengupta, “This is a ship. We have to stay together, because there’s nowhere else to go”. In this hermetically sealed environment, the lines between private and public are blurred, and loyalties and conflicts run at a higher pitch than on land. As alliances and loyalties shift through the journey, rumours and lies take over. Pre-histories start revealing themselves. Everyone aboard is carrying their own burden of unhappiness. Sengupta is grieving for a father he lost to the sea. Ujjwala’s childhood is riddled with abuse. At least one crew member will attempt to take his own life.

But even when the plot heaves violently in this novel, the flavour of seafaring life compensates. There are masterful descriptions of the hustle and bustle of the port in Hong Kong, the Coca-Cola boats in the harbour which smuggled girls into the big ships, the bullying of young cadets, the multinational crews who have to learn to work with each other in the close confines of the ship amidst the racism and homophobia that goes with the territory, the sad brutality of a sea burial. There are sweet scenes of camaraderie between seamen and intense moments where life hangs in balance. When the Aiwa Maru almost crashes into another tanker in the Chinese harbour of Tsingtao, Samant slows down the narrative to a precise accounting of all the terrors in store.

‘Once these two masses of steel collided with each other, the Aiwa Maru’s pointed bow would ram into the other vessel at a substantial speed. There would be a moment’s silence before the seamen, Chief Officer, everyone on the forecastle were thrown up into the sky. Both ships would tear into each other’s skin, crumpling, destroying each other like pieces of paper. The Aiwa Maru would try to surge ahead though and, with an ear-splitting noise, she would tear through the tanker’s belly, crushing mere human bones, meat and blood even as thousands of tons of oil gushed into the sea… Huge explosions would ensue. Massive balls of fire would engulf each and every person on both ships. Every soul aboard Aiwa Maru as well as the other ship knew this.’

Knowledge such as this is earned, not googled. Even when the novel Aiwa Maru veers off into melodrama, the ship Aiwa Maru remains real and vulnerable, worth the tragic journey.

(Shahnaz Habib is a freelance writer on books)