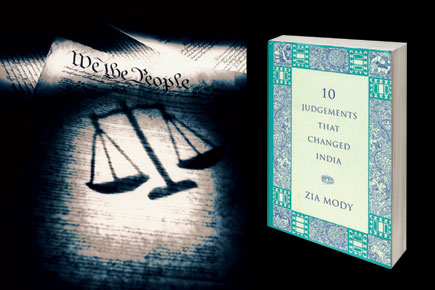 
In early 2012, Raghul Sudheesh—now founder-editor of the online law magazine LiveLaw, but at the time a writer with Bar&Bench—did an interview with Kesavananda Bharati, head of the Edaneer mutt in Kerala. In the introduction, he wrote: ‘It was quite interesting to learn that either [Bharati] wasn’t aware of, or didn’t attribute much importance to, his contribution to Indian law.’

Bharati, a young man of 19 when he became the head of his mutt, a hereditary position, also didn’t remember much about the proceedings of the case initiated under his name 40 years ago because “the lawyers handled it”. He didn’t go to the courts then, and even now doesn’t think about it. “I only remember it when I am asked to comment about it,” he told Sudheesh.

And yet, his is probably the most famous name in the Indian legal fraternity when it comes to a judgment. Kesavananda Bharati vs the State of Kerala is also naturally the first case discussed in Zia Mody’s 10 Judgements That Changed India.

The case was about challenging land reforms enacted by the Kerala government, which could have lost the Edaneer mutt much of its property.

Around the same time, the Central Government amended the Indian Constitution to insert certain land reform laws, which adversely affected Bharati’s case. Nani Palkhivala, the counsel, then used the case to challenge three Constitutional amendments and so, in effect, the question became how much power Parliament had to make changes to the Constitution.

Mody, one of India’s best known corporate lawyers, writes that the Supreme Court went on to deliver ‘what is arguably the most monumental decision in its history on 24 April 1973’. Thirteen judges sat for five months and finally ‘ascribed to [the Supreme Court] the function of preserving the integrity of the Indian Constitution.’

The Court upheld the amendments as valid but added one important rider for the future. Mody writes: ‘the court’s most significant decision, made by a thin majority of 7:6, was that although the Parliament had the power to amend any part of the Constitution, it could not use this power to alter or destroy the ‘basic structure’—or framework—of the Constitution.’

Bharati lost that case and, in his interview with Sudheesh, speaks about how the mutt, which was self-sustaining because of revenues from its land, now has to rely on donations. But the effect of that judgment was revolutionary. Because there is no agreement on what ‘basic structure’ is, Mody writes, ‘the only certainty is that judges will be free to mould the ‘basic structure’ corpus to emasculate any constitutional amendment that strikes at the ‘spirit of Indian democracy’.’ It is one of the reasons India can never be anything but a democracy.

Some of the other judgments the book looks at are the Shah Bano case on maintenance for divorced Muslim women, the Creamy Layer prohibition on reservations to Other Backward Classes, Vishaka guidelines on dealing with sexual harassment at the workplace, and the Aruna Shanbaug case on euthanasia. All ten judgments taken together make for an interesting journey through India’s post-Independence experience of democracy.

The impression is of an Executive relentlessly populist and self-serving (the Kesavananda Bharati case is an exception, where the enactment of land reforms was for a common good) and a Supreme Court trying to retain the ideals that the makers of India’s Constitution envisaged. The Court is often defeated in this tussle, as it was in the Shah Bano case. Bano was divorced by her husband of over 40 years by a triple ‘talaq’ and all he paid her was a lumpsum of Rs 3,000 as per Muslim Personal Law.

When she went to court, she was awarded Rs 25 per month. A High Court appeal revised it to Rs 179 and her husband challenged even that in the Supreme Court, which set up a five-judge Constitutional bench to resolve the issue of maintenance for divorced Muslim women. It held that they were entitled to it under Section 125 of the Criminal Procedure Code and in any conflict of this section with the personal law, the former would override the latter. It also exhorted the setting up of a Uniform Civil Code, a directive principle of policy.

Mody writes about how this was not really a path-breaking judgment; earlier orders had said as much. ‘Perhaps the most logical criticism of the judgement on secular grounds is the fact that the court could have decided in Shah Bano’s favour based on constitutional principles, without interpreting Muslim law (which was done in two cases before Shah Bano). The court ventured into hazardous territory when it invoked its own interpretation of the Quran.’

What happened subsequently is well known. The Rajiv Gandhi Government passed a law to nullify the judgment and, adding irony, called it the Muslim Women (Protection of Rights in Divorce) Act. Many see this act of ‘appeasement’ as the beginning of the rise of right-wing Hindu communal politics in India.

The eventual fate of the core issue, that of maintenance for Muslim women, was strange. In a 2001 case, Danial Latifi vs Union of India, the Supreme Court creatively interpreted the Muslim Women (Protection of Rights in Divorce) Act to again assign rights to a reasonable maintenance. As Mody writes, ‘Although the Supreme Court went against the obvious legislative intent behind the enactment of the MWA, it interpreted the law to truly protect Muslim women.’

The Court continued to uphold the rights of Muslim women later, too: ‘The conjoint effect of two recent decisions of the Supreme Court is that a divorced Muslim woman is free to either seek maintenance under Section 125 of the CrPC or claim lump sum alimony under the MWA.’ And so, despite the overturning of the Shah Bano judgment, it is more or less in force today.

The book is a round-up of such seminal judgments, and offers an engaging bird’s eye view. On the other hand, it is nothing more. Mody writes like a lawyer, breathing little life into the subjects she touches on. It is textbook-style writing. There is an absence of anecdotes, even on issues fertile for them—like the arguments and events surrounding reservations, or the great tug of war between the Judiciary and Government over judicial appointments finally culminating in the Supreme Court taking for itself the power in a 1993 case.

Mody mentions everything, but, in the interest of detailed and whole coverage, makes no attempt to bring in any sort of storytelling element. Her own perspective is minimal; some opinion usually comes in towards the end of the recounting of each case, but otherwise you get exactly what the cover promises—a summary of ten judgments and their impact. But still, for anyone who wants a quick and succinct insight into the milestones along India’s judicial journey so far, this book is it.