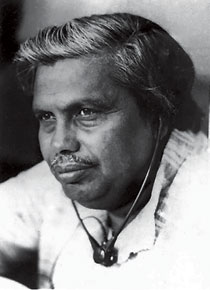 “So have you eaten the meat of dead cattle? Tell me honestly, how does it taste?” an intellectual once asked literary doyen Daya Pawar at a writers’ colony in Mumbai. Pawar reminded his interrogator that the sage Vishwamitra is said to have eaten the leg of a dog, responding, “So I won’t talk about the dead cattle that I may have eaten.”

Dagdu ‘Daya’ Pawar, whose poetry revolutionised Marathi literature, was born into the Mahar community of Maharashtra in 1935, a time when untouchability was the status quo. His portfolio includes several collections of poetry, short stories, and a screenplay about Dr Ambedkar. But his literary journey is also a story of loneliness and confusion, poignantly recorded in this autobiographical 1978 novel, now available in English through writer Jerry Pinto.

After refusing to indulge the intellectual’s morbid curiosity, Pawar goes on to tell the reader: ‘But it is true that the death of cattle brought great excitement to the Maharwada. It is also true that if the animal had died falling off a cliff, the excitement was even more acute. Such an animal’s flesh would be fresh. News that an animal had died in the wilds… would pass along faster than the telexes of today. They would rush to get there before the birds picked the carcass clean.’

As the first Dalit autobiography to be published in Marathi, Baluta (‘our share of the harvest’) went on to blaze a trail for many stories of oppression. But as Pinto points out in a thoughtful introduction to the book, Pawar had to create that path at great cost to himself. In the first chapter, the author splits himself into two selves, Dagdu and Daya, and pits them in conversation with each other. They discuss the pitfalls of memory, of writing a life that’s also a history, of other dangers. ‘Do I want to become an object of people’s pity?’ the writer wonders.

The subtext of an author split into two runs throughout this book. It begins as a contrast between the world of school and the world of home. The promises of education are not borne out in the domestic world that the writer inhabits. In fact, the books he loves set him apart from his family. At the same time, the tamashas and other folk theatre of the community play their own role in building the imagination of the young writer. The stories of his people become his own legacy: ‘An old widow goes to pay the tax. The poor thing deposits the money but forgets to take the receipt. The next day, when the old lady comes running to the courthouse for the receipt, the Brahmin clerk, cunning as a fox, shows no humanity. He pretends not to remember. Slapping herself across the face with both hands, the old woman comes back to the village. She is accused of stealing the money… All the villagers spit their scorn at her. She is handcuffed and taken to the taluka headquarters, deemed guilty of theft.’

In such anecdotes, it is not clear whether this is an incident that the author witnessed or if it is hearsay. It would be all too easy to dismiss this as a faultline in the narrative, to make a judgment about the truth of the story. But perhaps at such moments, it might be more useful to think of the novel as what poet and writer Audre Lorde called a ‘biomythography’—a novel that is also part memory, part myth, part history, a form that allows writers whose personal story relates to a larger social narrative of oppression to freely float between their various selves.

As the narrative moves back and forth between the past and the present, the reader may spend a lot of time trying to piece together a chronology. While talking about the school he attended in the village, Pawar remembers abruptly: ‘The fourth standard. There was a well-built girl in my class. When she began to menstruate and her skirt was stained with blood, I was the first to notice.’ After this stark image, we are no longer in school. The memory of the stains on the classmate’s skirt reminds Pawar of other women, of sex, of an uncle’s mistress. Elsewhere, reminiscencing about a childhood romance leads him to memories of Dr Ambedkar and Dadasaheb Gaikwad.

“Tell me honestly,” the writer’s colony intellectual asks of Pawar, as if entitled to a secret. ‘But it is also true,’ Pawar admits to the reader after rebutting the writer. Baluta is a remarkable narrative about the many shapes of truth. It veers between the voyeurism of ‘tell me honestly’ and the vulnerability of ‘but it is also true’. The juxtaposition of the two makes Baluta an evocative record of caste politics as well as the the remarkably universal story of a man who has never belonged comfortably in any of the many worlds he lived in.