Gurcharan Das is convinced the Mahabharata holds relevance even today. He uses the epic to understand modern day issues such as the Ambani row and Satyam scandal 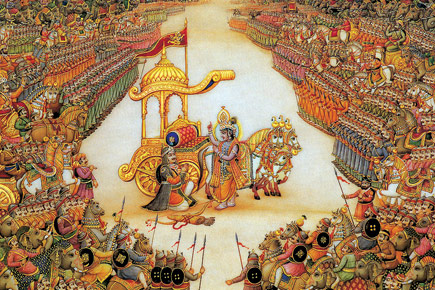 Gurcharan Das uses the Mahabharata to understand modern-day issues such as the Ambani brothers’ row and the Satyam scandal.


Gurcharan Das uses the Mahabharata to understand modern-day issues such as the Ambani brothers’ row and the Satyam scandal.

For the past year or so, I’ve found myself in the grip of a rather strange condition. It all started with my umpteenth reading of C Rajagopalachari’s retelling of the Mahabharata. I picked up the book—an old, red calico-bound hand-me-down—on a particularly stressful night when the doctors just couldn’t figure out why my pregnant wife was getting frequent bouts of fever. I wanted a ‘comfort’ read where I knew the plot inside out, a sort of curd rice for my troubled mind. Since then, even during happier times, my predilection for the epic has turned into an obsession.

I’m convinced that the Mahabharata’s claim, ‘What is here is found elsewhere. What is not here is nowhere’, is not a boastful exaggeration. Therefore, I was looking forward to Gurcharan Das’ book, The Difficulty of Being Good, with schoolboy enthusiasm. While the prescriptive and preachy Bhagwat Gita, a very small part of the grand epic, has a kind of mass appeal, it is the Mahabharata, with moral ambiguity in almost each of its verses, that remains a source of endless fascination for the more serious scholars of Indology. Das’ book, in many ways, is his personal quest to understand what he calls the subtle art of dharma, which is at the heart of the Mahabharata. It’s a word that could mean duty, justice, law, custom or the righteous way of life. But none of them quite captures the essence as is repeatedly conveyed in the epic by the actions of the dramatis personae.

Das sets himself the steep task of decoding dharma and applying it to understand modern-day issues such as the Ambani row and Satyam scandal. Now, Das is renowned as one of the most meticulous researchers outside the world of professional academics in India. While doing research for India Unbound, he was aghast to find that not a single person involved with something as monumental as the liberalisation of the Indian economy had kept a diary of events. As a result of meticulous research, an eye for detail and probably the time he spent in Harvard as a student of philosophy, the book offers not just an Indic perspective on dharma, but also an indepth comparison of Mahabharata heroes with their Greek counterparts.

‘The Iliad is bloodthirsty, driven by anger and violence. The Mahabharata is just as gory, but it questions the violence… Achilles, like Arjuna, faces a conflict between the demands of divinity and humanity. After doing wrong, Achilles is able to get on with it. Arjuna however, never quite forgets that the Pandavas are employing deceit in order to win.’

Das focuses on three to four key events in the epic, such as Bhishma’s vow of celibacy and the destruction it brings, Duryodhana’s burning envy for his more admired cousins, the game of dice and Draupadi’s disrobing, and Arjuna’s last minute fear of fighting. Yudhishtra, the very embodiment of dharma, is clearly Das’ hero. He points out how dharma for Yudhishtra evolves from being an inflexible, absolute principle when he agrees to play the game of dice already knowing the result, to realpolitik or pragmatism when he, the firmest believer of ahimsa, declares war and presides over dodgy moral decisions to win a just war.

But then, in the 17th book of the epic, Mahaprasthanika parva, when the Five Pandavas and their wife Draupadi are trekking up Mount Kailash, Yudhishtra is the only one to reach heaven in human form, as the others keep dropping dead—in reverse order of their adherence to dharma. First to fall is Draupadi. Yudhishtra interprets this saying that though the Pandavas were all equal unto her, Draupadi had great partiality for Arjuna. ‘She obtains the fruit of that conduct today.’ On Arjuna’s death, Yudhishtra reasons, ‘Arjuna had said that he would consume all our foes in a single day. Proud of his heroism, he did not, however, accomplish what he had said. Hence has he fallen down. This Phalguna disregarded all wielders of bows. One desirous of prosperity should never indulge in such sentiments.’ But wasn’t Arjuna’s adherence to dharma uniformly better than Yudhishtra’s, as Das himself points out?

In an epic full of such ambiguities, one can’t expect the author to interpret every act in detail. However, there are two significant areas where Das disappoints. The application of Mahabharata’s dharma to modern day India is far too simplistic. If Anil Ambani has Duryodhana-like envy for his more successful brother Mukesh, the argument can also be flipped if, as some suggest, Mukesh is denying Anil what is rightfully his.

He draws another dodgy parallel. The otherwise righteous Prime Minister Manmohan Singh was a mute spectator when a ‘scam tainted’ Pratibha Patil was propped up by his party, much like the blemishless Bhishma, tied down by his allegiance to the king of the day, kept quiet when Draupadi was disrobed.

But most importantly, does the book add to our understanding of the moral subtleties of the great Indian epic? The late poet AK Ramanujan, in a 1980s essay titled ‘Is there an Indian Way of Thinking?’, did the job of explaining contextual morality in supreme fashion in just about a dozen pages, although his canvas wasn’t limited to the Mahabharata.

By the time I finished Das’ book, an effort so grand in intent, I couldn’t help but feel like that semi-golden weasel that rolled in the ashes of Yudhishtra’s opulent Ashvamedha yagna in the hope of turning all gold. ‘But, alas my body remains the same; so the great Yudhishtra’s Ashwamedha yagna is not equal to the selfless sacrifice of a poor family.’