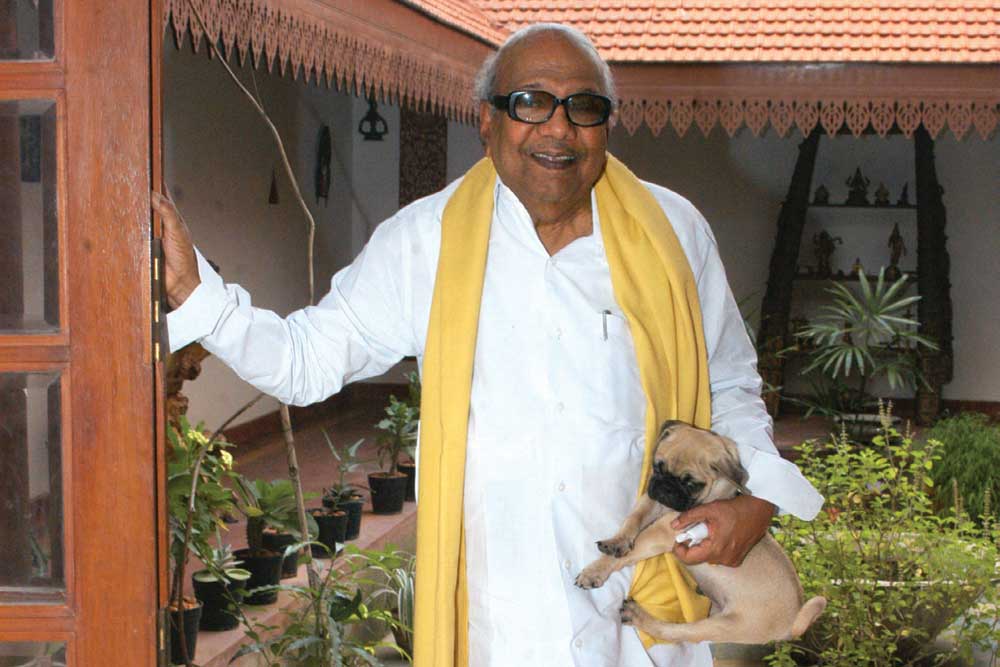 THOUGH THE DRAVIDIAN movement is nearly hundred years old and political parties bearing allegiance to its ideology have ruled Tamil Nadu for more than 50 years, English language biographies of the movement’s tallest leaders have been few and far between. While Indians have not done particularly well in the production of modern biographies that are based on meticulous research and interviews, the problem is exacerbated in Tamil Nadu by a serious handicap: local political discourse leans heavily on, among other things, the personality cults built around individual leaders. No wonder, then, that hagiographies and partisan accounts abound, while biographies providing critical insight into the minds and personalities of political stalwarts are relatively rare. Attempts at biographies in English are sometimes stalled or invite legal trouble. Vaasanthi’s biography of former Chief Minister J Jayalalithaa was suppressed by a court injunction in 2009. (It has since been rewritten in more acceptable form and published to wide acclaim after the leader’s death in December 2016.) A biography of Karunanidhi, authored by a senior journalist and known partisan of the Dravidian cause, was called off shortly before publication in mid-2011. Another biography of EV Ramasamy Naicker (‘Periyar’), the founder of the movement, has been in the works for many years now with no date of fruition in sight.

Given this background, Karunanidhi: A Life in Politics by Sandhya Ravishankar, a Chennai-based journalist known for her fearless investigative reporting, is a welcome addition to the genre. Her biography broadly covers Karunanidhi’s early years and induction into the Dravidian movement; his rise to power within the DMK and anointment as Chief Minister in 1969; achievements and failures as party leader and head of the state government; conflicts with MG Ramachandran, founder of ADMK (now AIADMK) and arch political rival; opportunistic alliances with national parties; and, finally, his strengths and weaknesses as a family man and head of a political outfit. Barring the account of his early years, which is derived from abundantly available political folklore, the biography offers journalistic coverage rather than insight into the person. The political acumen and wiliness displayed by Karunanidhi, now 94 and battling for life in a Chennai hospital, in the course of his career are elaborated, but the narrative seldom offers us a glimpse into the underlying reasons for his behaviour and actions.

Karunanidhi was not only endowed with extraordinary political skill but he also possessed a driving ambition that he steered in startlingly innovative directions. While he worked hard at his politics, he also ensured that he did well financially for his efforts. In the late 1940s and 50s, while a host of top leaders of the DMK were engaged in the film industry as screen and dialogue writers, Karunanidhi outshone all the others with hits like Parasakthi (1952) and Manohara (1954), eventually leveraging his enhanced public profile to get ahead of his political rivals. His continued engagement in cinema led him to set up a family-owned film production unit, Mekala Pictures, that came in handy for producing films for the rapidly expanding audience of party cadres. Playing the role of party treasurer since 1961, in charge of collecting funds for the party, he hit upon the innovative idea of writing and staging propaganda plays during party conferences and rallies, thus leveraging his creative abilities for the party’s benefit as well as personal advancement. The founding of Murasoli, the daily tabloid for party propaganda, as a family-controlled enterprise was similarly a double whammy. He was to repeat this later as well, with the establishment of Sun TV in 1993 by his grandnephews and of Kalaignar TV in 2007 by his own family.

By dint of its ideology, the DMK flaunted Tamil pride as part of its political platform, and as Chief Minister, Karunanidhi lost no time in positioning himself as the foremost champion of the Tamil cause and the so-called Tamil nation. He achieved this by writing commentaries on classics like Tirukkural and Tolkappiyam, and then promoting them through the power of political patronage and a culture of sycophancy. For Karunanidhi, personal profit and politics always went hand-in-hand. Using his clout in the film industry, he maintained a steady output of commercial screenplays well into his old age.

Given his humble origins and creative bent of mind, Karunanidhi was the opposite of a conservative in politics as well as personal life, but he was not quite a liberal. He did precious little to promote a liberal, democratic culture within his party or government.

The author rightly credits him for his stellar role in changing the complexion of politics in the state, making it more participatory, welfare-oriented and egalitarian, but Ravishankar doesn’t flinch from detailing his various flaws and failures. Chief among them was the establishment and perpetuation of a pervasive culture of corruption, censured early by the Sarkaria Commission in 1976. The political opportunism which made him ally with and oppose the Congress by turns, and even join the NDA Government under Vajpayee, is elaborated in detail. Surprisingly, the feudal structure of the party with local chieftains ‘operating’ autonomously in various districts, a topic seldom discussed in the local English language press, is also dealt with. More could have been written on the DMK’s capitulation, under Karunanidhi’s watch, to the dominance of caste interests in electoral politics as well as governance in the state. Karunanidhi’s DMK is no less guilty than its rival AIADMK of promoting liquor consumption beyond all reason, a policy that resulted in ruthless exploitation of the poor and caused incalculable harm to large sections of the population, especially in the rural areas. The charade of rhetorical support to the Eelam cause stood fully exposed during the Fourth Eelam War and the run-up to the Mullivaikkal massacre in May 2009. It paved the way for the party’s defeat in subsequent elections to the state legislature, a setback from which the leader and his following have yet to recover.

Karunanidhi: A Life in Politics offers a balanced perspective on the complex life of a political leader, a welcome departure from the extant culture of hagiography that is characteristic of the Indian milieu.