We present the faces that launched a million stories from the JLF 2017's tenth edition. Photographs by Rohit Chawla 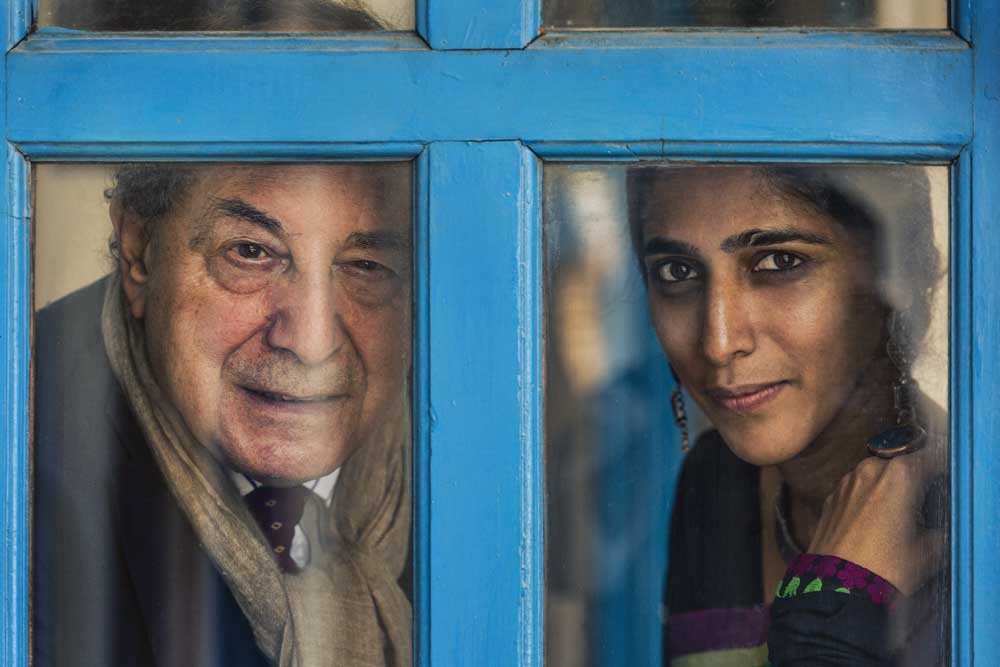 THIS IS POSSIBLY my fifth visit to the Jaipur Literature Festival in the last 10 years. I exchange fond notes with those who remember JLF 2007. Salman Rushdie was there. And so was the recently crowned Man Booker Prize-winner Kiran Desai. Rushdie essayed the role of protective-uncle- to-homecoming-queen to perfection. He fended off journalists, and even shooed off the enterprising ones who had scampered all the way up Amber Fort—for one byte, Sir, just one byte. We wondered if all the drama was her choice or his gambit. Today we marvel how Rushdie held a press conference in the front lawns with no ado. He answered a few questions, spurning the journalist who had dared to give him an unfavourable review. He signed copies of his books and even grudged a smile to fans. But those were simpler days; strangers became acquaintances, acquaintances became friends. And Rushdie could visit the country without the bigots coming out to roost.

My favourite JLF would have to be 2012. Oprah Winfrey in a floral kurta descended upon Diggi Palace to much popular acclaim, making schoolgirls of all, including Barkha Dutt. Steven Pinker (the Mick Jagger of intellectuals) met enthu reporters over dinner. David Remnick (editor of the New Yorker) unpacked the A-B-C of journalism. And Ben Okri was the cynosure of all eyes. The Nigerian poet and novelist epitomises effortless cool; only he can pull off a beret perched at a jaunty angle and lapse into poetry in that rare moment of quiet. Okri might have visited five years ago, but he stands immortalised by leading contemporary photographer Rohit Chawla at Charbagh at Diggi Palace. Chawla’s exhibition reminds us that JLF has truly brought the world’s biggest writers to one stage.

Sadly, 2015 was also the year shit hit the fan. (Excuse the language, but PC wouldn’t do.) Rushdie’s video interview had to be cancelled as certain extremist outfits threatened ‘rivers of blood will flow’ if he were to emerge—even if it were onscreen. A few authors took a brave stance and read excerpts from his Satanic Verses, which only added fuel to the blazing fire. But for all the controversies that have threatened to disrupt JLF, it has grit its teeth and emerged better prepared.

2016 was the year of the stellar performance. Authors such as Margaret Atwood and Alexander McCall Smith proved that they could be as entertaining as a Stephen Fry. Never before (or since) has laughter ricocheted off ancient palace walls so loudly. The 77-year-old Atwood brought the house down repeatedly with her cerebral and deadpan wit. I have found no other author to be as ‘old’ and as ‘contemporary’ as her.

In comparison, this year had no such standout performances, no sessions that would make it to posterity. The unruliest crowds (unsurprisingly) were reserved for film stars. Rishi Kapoor got the loudest cheer when he burst into the song Main Shayar Toh Nahi. His conversation with critic and author Rachel Dwyer proved to be a one-man skit complete with mime and mimicry. Javed Akhtar and Gulzar were the other two showstoppers. Aishwarya Rajinikanth Dhanush started out on a political note by voicing her support for Jallikattu in Tamil. But soon her conversation took on tones of a ‘saas bahu’ serial as she fell into a swoon over her father, mother and husband. During her session, an elderly gentleman wondered out aloud, “Aishwarya Rai is looking very different, no?” A tourist was spotted googling ‘Rajinikanth’ on her phone.

While it is little surprise that Rishi Kapoor had the ladies agog, the other undisputed hit was Shashi Tharoor for the anglophone gentry and Neelesh Misra for the heartland connoisseurs. A bevy of girls discussed Misra’s past loves with authority. One even shyly confessed to her friends that he was on her wallpaper— both phone and computer. More than once I overheard the silver-haired boho damsels discussing Tharoor’s single (or not) status as they rushed for his sessions and scrambled to nab a front- row seat. An Australian mental health clinician who was attending her first JLF simply said “Yumm” when he took the stage. Given the loquaciousness of most, her pithiness must be commended.

A few of us were puzzled by the crowd’s cheer every time Tharoor (author of the recent work An Era of Darkness) elaborated on the atrocities of the British Empire on India. An engaging speaker, he said, “My book says the British came to one of the richest countries at the time and after 200 years of rule reduced it to one of the poorest countries in the world.” The crowd hooted.

I went with the hope of interviewing Richard Flanagan. but The Australian author proved as solitary as the Tasmanian devil. He had decreed that he would speak to no media

This year I went with the hope of interviewing Richard Flanagan. The Australian author’s The Narrow Road to the Deep North is a work of uncommon beauty and depth. But Flanagan proved as solitary as the Tasmanian devil. He had decreed to the organisers that he would speak to no media. I caught him in a brief unguarded moment over lunch, just as he polished off the last bits of vegetarian curry from his plate, and beseeched him to relent. He was polite, but steadfast. “I do not speak to media, it is just something I do not do,” he said. I tried to make my case, but he remained unmoved. (The last time such aloofness had been exhibited was in 2014, by Jhumpa Lahiri.) However, Flanagan’s eloquence shone forth at the many sessions he partook in. The fact that the Man Booker prize allowed him to continue to write at a time when he was considering working in the mines to support his family has been repeated often. These hardships have only made him more appreciative of his readers. During ‘The Art of the Novel: On Writing Fiction’, he said, “A writer is obliged to win the reader with every sentence, with every clause. Because as a writer you owe readers everything. Readers owe you nothing.” He added later, “A writer is someone who has readers. If you hold to that contract, you have a chance of writing something valuable.”

Flanagan was later spotted with a bemused but intent expression during a whisky tasting session at the Penguin Party (which marked its 30th anniversary in India). The parties of JLF are an event unto itself, with the discerning few choosing to attend only the post-8 pm events, eschewing the day’s proceedings altogether. While the liquor flows and nibbles are plentiful, what is lacking is dinner at most of the publisher dos. When the suspicion of no dinner is confirmed, the kebabs vanish, the calamari barely makes it out of the kitchen and even the beetroot sliders are seized.

This year had few standout performances, no sessions that would make it to posterity. The unruliest crowds unsurprisingly were reserved for film stars

At this JLF, the fans of Wire (only the best TV show ever) tried to play it cool, but the sudden appearance of Dominic West (better known as Jimmy McNulty) threw them into a tizzy. He sauntered around Diggi Palace, a foot taller and dimension cooler than most. He remained chatting with friends right by the bar through parties, and not once did I see an autograph seeker go up to him. Was he perhaps sampling each of the signature cocktails, lovingly named after JLF stalwarts, such as the Gokhale Gimlet, Hail Suhel and the Dalrymple Daiquiri? Alas, one will never know.

‘Of Saffron and the Sangha’—Dattatreya Hosabale (RSS joint general secretary) and Manmohan Vaidya (RSS ideologue) in conversation with Pragya Tiwari—garnered the most pre-publicity. Articles were written supporting their inclusion, others proscribed it. While journalists took their seats ready for fire and brimstone, their pens stayed airborne, hovering in uncertainty over their notebooks. Most of the literary bookish hacks (being either Malayalee or Bengali) struggled to follow the highfalutin Hindi of the RSS strongmen. Tiwari impressively stood her ground, asking questions that were more interesting than the answers they gave. Hosabale’s comments on India’s reservation policy were quickly politicised and picked up as key states head to the polls shortly.

On Saturday, JLF wore a pall of gloom even though the sun shone merrily away. It was the morning after the Donald Trump inauguration. Numerous authors expressed their anguish, but Man Booker-winner Paul Beatty looked the most distraught of them all. He said, “I’ve zero optimism. On their first day, they took down the pages of climate change and LGBT rights from the White House site. It is a small gesture, but it is telling. I am as lost as anyone else. I have often said that when Trump writes his memoir, it will be called, ‘My Tweet’.”

This might have been the third appearance of Italian writer and publisher Roberto Calasso at JLF, but once again his erudition rivetted all. He first discovered India during his adolescence by reading the Gita and Upanishads. Since then, his books such as Ka and Ardor have reimagined the ancient myths and texts in a new and meaningful way. Commonly described as a ‘literary institution of one’, his knowledge is not only renowned but also daunting. He has often spoken and written about the ‘continuity of gestures’ that you find in India, which date back to Vedic India. Catching a breather in the author’s lounge, he explained, “In India there has been a continuity more than in other countries. If you go to Greece, you don’t find any trace of the past itself, except for the stones which have remained. In India it is different. There are various traces in everyday life, in habits, ceremonies, in festivities which have a very long past. You can find this especially in certain smaller segments of the country.”

JLF has always been remarkable for providing a platform for discussion and debate, whether it is on politics or the Vedas. It is here that thoughts and ideas get precedence over dogma and prejudices. But this was the first time when the topics didn’t prove as scintillating as one has come to expect. This year the venue seemed packed with more selfie-takers than book-buyers, posers outnumbered browsers. “Tu kutton ka filter kyun daalta rehta hai?” one rakish boy yelled to another, as hundreds of others clicked, scrolled, edited, deleted, posted and commented on photo after photo after photo.

While nostalgia is the first resource of the kvetcher, one can’t help but yearn for when JLF was more about books and letters, and less about hype and being seen. JLF 2017 is bigger than ever before, but it is not better than ever before. In its pursuit of scale, it shines less bright.