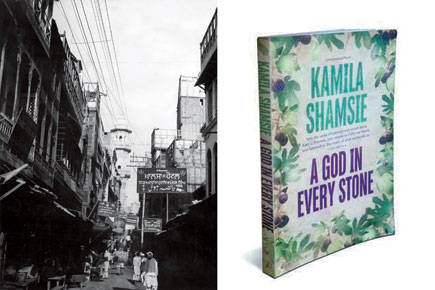 British-Pakistani writer Kamila Shamsie is worried she may have invented a swimming pool. “Was there a swimming pool at the Peshawar Club in 1915?” her mother had wondered while reading her new novel. “It seems rather early.” The novel is so confident in its conversation with history, this seems an odd point to stick on. But it bothers her “that I put a swimming pool where there might not really have been [one].”

“Where there are historical details to be found, I want to go out and find them,” Shamsie says. “But the truth may be that I’m a bit of a nerd. I love history, and I love the research… I want to find out what happened and then weave a story around it.” The achievement of A God in Every Stone is that those two things are never separate.

The novel resists summarising, but here are the bare bones: Vivian Rose Spencer is a young Englishwoman brought to Peshawar—first in 1915 and again in 1930—by her quest for the fabled silver circlet of Scylax, long- sought by a man she has come to love. While in Peshawar in 1915, she adopts as her student a Pashtun boy named Najeeb Gul, and bequeaths to him her passion for history and her fascination for the circlet. Najeeb’s brother Qayyum Gul, honourably discharged after serving with British troops in the First World War, returns adrift, but eventually finds a sense of himself among the Khudai Khidmatgar, and their resistance against the Empire.

History and story are inseparable in Shamsie’s novel. The story emerges from history, and grows to fill the spaces between it. We don’t know whether there was a swimming pool, and who cares—so long as we can understand why the stones and light and figs at an Ancient Greek site at the edge of the Ottoman Empire are so transformative to a young Englishwoman. The invention of detail is a small matter compared to the excavation of texture. History is as much about experience as it is about fact; it ought to be touchable.

“You know, it drives me crazy in museums,” says Shamsie. “You go to museums and you see these artefacts and you just want to touch.” Perhaps this is why her novel is full of people touching things—a white block of stone on a hillside in Caria, a carved hand once part of a Stupa, the fingertips of a stucco Buddha at Shahji-ki-Dheri.

It is clear that, to Shamsie, history is first and foremost material—something made, something tangible and sensory, never fixed and perhaps nonsensical at a remove. Her novel treats history almost as a puzzle, its pieces infinite and scattered everywhere, waiting to be dug up and put together.

Reading the novel, an apparition of the author emerges: a curious, imaginative being roving the globe forging unforeseen connections between places, artefacts, histories. But Shamsie’s approach is rather more rooted: “The thing that you need to do is not look at the globe but look at one patch of land.”

The patch of land she looks at is Peshawar. In her hands, to the uninitiated reader, the city reveals itself to be a magnificent palimpsest, a layer-cake of histories, a confluence of overlapping empires.

“If you just walk around the Peshawar or Taxila museum, you see— there’s a Persian flower, there’s a Greek god, there’s a Buddha, there’s Hariti the demon goddess, there’s Vishnu— there’s all these things, and sometimes they’ll be in one stupa… and at the base, there’s Atlas, and Atlas is holding up the Buddha. That’s right there. It’s not that I had to look around the world and make connections. I looked at that one stupa and I said, they were all here… History gives you the answer. History says these guys were all here. The Chinese were there… the Brits were there and the Mughals were there and it was the great centre of Buddhism; the Huns were there, burning things down, before the Taliban. It has all been there, it’s all in the soil, it’s all in that one location, and all you really need to do is acknowledge it. That’s all I did.”

Shamsie’s Peshawar of 1915 and 1930 is at times a sort of living version of this history. The novel’s early descriptions of it as a diverse idyll are even somewhat jarring, inviting scepticism. But old photographs of Peshawar’s Qissa Khawani bazaar—Shamsie’s ‘Street of Storytellers’—bolster her portrayal, at least if one is inclined to draw reassurance from multilingual street signs.

In conversation, Shamsie reveals a preoccupation with “shared history” and her novel is utterly persuasive in its demonstration of this sharedness— Peshawar comes alive as a middle of everywhere, a site of global confluence. This gives lie not only to curated national histories, but to the notion of separate histories of East and West.

This is especially significant considering the place Shamsie is writing about, and it is no accident. The novel was born as much from her interest in Peshawar’s ancient history as her bewilderment at her own sense of remove from present-day Swat valley. Shamsie is aware of writing against a certain narrative of the region, and her insistence on digging up Peshawar’s plural history and laying it all out for people to see is overtly political.

“So much of this novel is also about place, and what lies in Peshawar’s soil. Which, of course, is an important question because one of the things that people like the Taliban would like to do is erase those ancient histories. They don’t talk about it because it doesn’t fall within their idea of Islamic history. But the idea that in this soil, all this happened; that there were these Buddhas around; the feel of the stone, and that literal, physical connection to 5,000 years of history, I think, is an astonishing thing.”

What is preserved and recorded in Peshawar’s soil is also significant because of what is not. This contrast is built into the structure of the novel, the second half of which is a layered narrative of the massacre of Congress and Khudai Khidmatgar men in the Qissa Khawani bazaar on 23 April 1930—a seminal moment in the North West’s non-violent resistance against the Raj that Shamsie says is “largely forgotten”.

Written in narrowing concentric circles around the event, this second act draws much of its tension from the disappearance of the bodies of those killed in that massacre. The first act’s simmering preoccupation with stones reveals its function here: all this talk of excavating stones and finding circlets thousands of years old, and suddenly bodies are being disappeared and blood washed away. Instead of being allowed to become part of Peshawar’s storied soil, history is being erased even as it unfolds. A history of blood, invisible between the stones.

Talking about the novel in such bald terms does its complexity a disservice. History is simply one strand in a novel that is itself a puzzle of big ideas— though not nearly as pedantic as that makes it sound. Rather than make pronouncements, it suggests questions. How might displacement fit with self- realisation, for instance? Discovery with romance? What is the relationship between loyalty and identity? Gender and empire? What is the role of history in a sense of place? Why does place matter at all?

The more serious threat of such a pig- headed focus on solving the novel’s idea-puzzle is that it misses the beauty of the writing. The author has clearly taken to heart the warning of her long- time teacher and mentor, the Kashmiri poet Agha Shahid Ali: “The fact that you’re writing something that’s politically engaged is no excuse for a bad sentence.” And there are some great ones.

Particularly beautiful is Shamsie’s use of fruit imagery: a Pashtun soldier biting into an orange at war in France; the devastating scent of apples on a wounded sandy-haired soldier’s breath, disabling Vivian’s participation in the War; the juice of ripe plums harvested in Peshawar’s orchards, wiped off on sleeves or boiled to stain the garments of the Khudai Khidmatgar; the silver- purple figs of Caria that fix themselves in Vivian’s imagination, and propel her out of the natural course of her life.

If the novel were only about stones— facts and researched details—it would not be half what it is. The unrecorded flesh in between—the split figs and bland oranges and smashed plums— are just as important.