Into the Forbidden Zone

The cost of conflict across the Line of Control 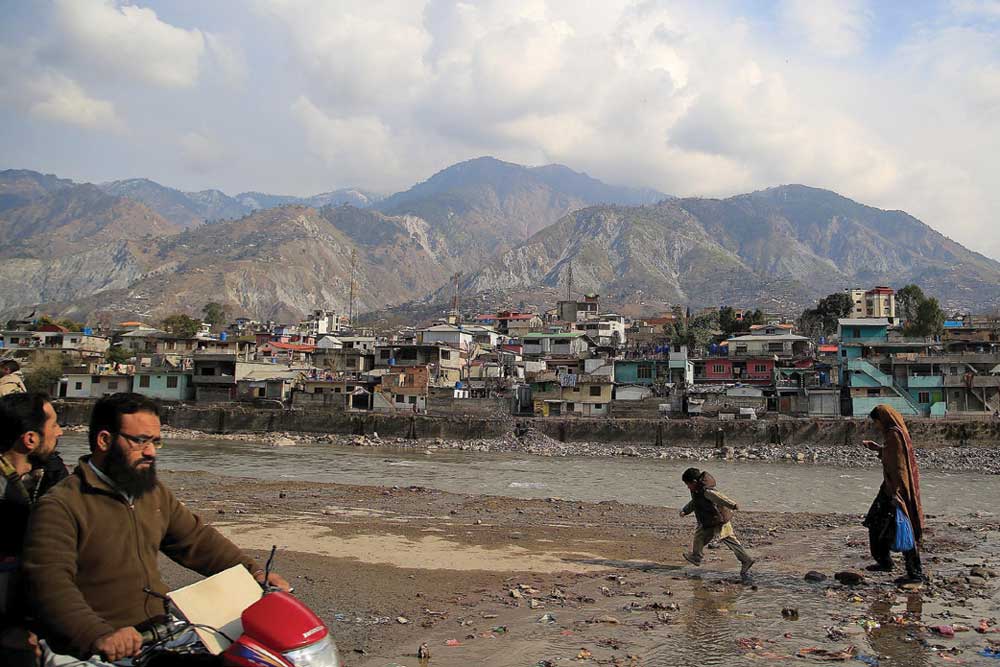 THE REPORTAGE ON the Kashmir conflict in India and Pakistan that generally falls in a comfort zone between propaganda and thinly disguised propaganda, no attention is paid to the impact of the conflict on the lives of ordinary people.

In Between the Great Divide, Anam Zakaria tries to fill this gap by sensitively recording the personal narratives of a wide range of people who live on the Line of Control (LoC) in Pakistan-occupied Kashmir (PoK): people whose family members were killed or injured by Indian shelling; assorted militants and ex-militants; political activists fighting for independence from both India and Pakistan; and refugees from Keran in Kashmir. To get the historical and political background, Zakaria interviews retired army officers (mostly anonymous except for Pakistan’s now-retired General Jehangir Karamat, notably) and the president of ‘Azad Kashmir’. Through these interviews—conducted mostly during 2014-16—she tries both to trace the Kashmir problem right from its genesis in 1947 through the tribal invasion and subsequent war with India, the 1965 and 1971 wars, the armed insurgency which started in 1989 and the Kargil War to understand how the lives of people in PoK have been affected by the conflict.

The attraction of the book for Indian readers is that for the first time we get to hear voices of ordinary people in PoK. Zakaria is particularly empathetic to the women who are interviewed, most of whom have been tragically impacted by the hostilities. The sheer mindlessness and horror of seeing children and parents being killed in shelling from the Indian side is highlighted by the manner in which the author has interviewees speak without editorialising. Particularly interesting is her account of the agitation by the women of Keran against the presence of mujahideen in their villages, which they say invites shelling from the Indian side. These personal narratives of women make for compelling and heart-rending reading. In an attempt at even-handedness, the author includes dissenting political voices,the personal narrative of a Sikh whose family fell victim to the ethnic cleansing of Muzaffarabad in 1947, and an account of the massacres of Sikhs and Hindus in Mirpur in 1947.

The interviews with former army officers confirm the responsibility of the Pakistan Army for the tribal raids of 1947and Operation Gibraltar in 1965. Their accounts of the 1965, 1971 and Kargil wars are worth reading. General Karamat frankly admits to Pakistan’s role in training, arming and pushing militants into Kashmir after 1989-90 and even rues the fact that this strategy was severely affected by the 9/11 attacks on the US on account of the ‘line between terrorism and the freedom struggles getting blurred’.

One gets a clear impression from the interviews of ex-army officers, militants and politicians that for Pakistanis, the Kashmir dispute is essentially about the Muslim-majority areas of the erstwhile Kashmir province—including Gilgit- Baltistan and some areas in Poonch and Mirpur in pre-1947 Jammu province— and not about the whole of the former princely state of Jammu and Kashmir. It does not appear that today’s Ladakh and Jammu figure in their calculations. Curiously, it is also evident that the average Pakistani knows very little about PoK. It also becomes clear that it is the government of Pakistan, rather than that of ‘Azad Jammu and Kashmir’, which exercises power there.

Even though the author clarifies in the preface that the term ‘Kashmiri’ in the book is used in a political rather than a linguistic sense, it is difficult for us in India to accept this usage since the inhabitants of PoK, except for a small minority in the Keran area, are not ethnically Kashmiri. Pahadi/Potohari and Gojri speakers, or Mirpuris for that matter, in Jammu and Kashmir do not consider themselves Kashmiris and are not treated as such.

Yet, this is one of the finest and most honest books to come out on the impact of the conflict.