In Praise of Mrs G

In the first of a trilogy which is part history and part memoir, Pranab Mukherjee misses the big picture of history 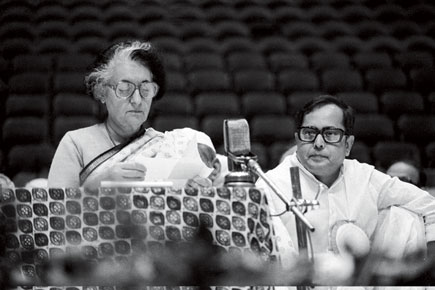 In the first of a trilogy which is part history and part memoir, Pranab Mukherjee misses the big picture of history


Shortly after the Congress party’s debacle in the 1977 Lok Sabha election, I asked Indira Gandhi why she had gone to the polls if the signs were not propitious. She turned her large eyes on me in surprise to exclaim artlessly, “One doesn’t hold elections to win! One holds elections because it’s a democratic obligation.”

She didn’t go as far as Pranab Mukherjee, who argues in his ‘Epilogue’ that by declaring the Emergency and being driven out of office, Mrs Gandhi strengthened, if not saved, democracy. The 70s ‘was the age when democracy matured,’ he says. ‘Those who had predicted the end of Indian democracy with the onset of the Emergency were proven wrong, as were those who had written off the political career of Indira Gandhi.’ True enough. But having satisfied himself that thanks to Mrs Gandhi, democracy is no longer in peril, he might now consider how this bears on the future of the 130-year-old organisation that introduced democracy to India and sustained it for so many years.

This detailed account of innumerable meetings of various Congress organisations, long lists of names that were never well-known and are now totally forgotten, all manner of resolutions that were passed, and manoeuvres and machinations that took place behind the scenes, gives no hint of such introspection. But the narrative itself might have a lesson for the present, befuddled Congress leadership. Perhaps Mukherjee wishes to convey that if the party could emerge invigorated from a major crisis 37 years ago, it can again regain its lead role, either under Mrs Gandhi’s daughter-in-law and grandson or with a new leader at the helm.

‘The Return of Indira Gandhi’ would have been an appropriate title for this personal take on a passage in history. Even the intimate ‘Prologue’ and the first chapter about East Pakistan’s transformation into Bangladesh are preludes to the comeback story of the woman Atal Bihari Vajpayee hailed as Goddess Durga. Although the book claims to cover the 1969–80 period, the focus is on those eventful months when Mukherjee was often noticeably in attendance at 12 Willingdon Crescent, Mrs Gandhi’s home and office during her political exile. She herself was usually at the centre of an admiring crowd, telling visitors that foreigners came to India to see the Taj Mahal, the Qutb Minar and Indira Gandhi.

Readers will love the picture Mukherjee draws of himself, standing like a naughty schoolboy at the foot of the dining table while ma’am at the top end, ‘feet in a tub of warm water’ because she had a bad cold, scolds him roundly like some stern governess for disobeying her order not to contest the Lok Sabha election. It’s a pity Mukherjee doesn’t regale us with more such vignettes. But he does enjoyably describe her snubbing Siddhartha Shankar Ray, who had the temerity to greet her with a sprightly “You look pretty today” when she wore a crimson sari at the Shah Commission. Mukherjee must have relished the asperity in her voice as she rapped out curtly, “Despite your efforts.”

The one time I saw Mrs Gandhi before the vengeful and unjudicially mocking Justice JC Shah—her first appearance in fact— she was bundled in coarse cotton, her sari hitched above the ankles of her slippered feet. Her hair was a tousled, grey crow’s nest, her face innocent of even powder. This studiedly humdrum appearance is etched in my memory because I had been to see her the previous evening and found her immaculately and beautifully costumed. Her face was delicately made up, her hair dyed jet black, the silver plume gleaming brightly. A short embroidered Kashmiri cape hung over her rich silk sari.

I learnt later she was calling on the British Prime Minister, James Callaghan, at Rashtrapati Bhavan. The careful couture for that meeting had to disappear like Cinderella in reverse when she appeared before the Shah Commission as the wronged champion of the masses. As Mukherjee says, she had an acute sense of time and place.

It’s a pity that in telling her story, he suppresses his own analytical skills and ignores history’s bigger picture. That does scant justice to the liberalising mission Mrs Gandhi embarked on after her comeback, and his own contribution to it. As I noted in Waiting for America: India and the US in the New Millennium (2002), ‘When Mrs Gandhi made him commerce minister with full Cabinet rank in January 1980, a leftist magazine commented that socialism did not grow out of the pipe Mukherjee smoked.’ It deserves stressing that this was the start of the economic revolution that blossomed 11 years later, under PV Narasimha Rao and Manmohan Singh.

Someone less fascinated by politics as an end in itself and more mindful of human responses would agree that the outcome of the 1977 election was not determined by momentous issues like the abridgement of fundamental rights or curtailment of press freedom. It reflected the wave of repugnance that swept the northern states at the brutalising methods of the nasbandhi campaign, which Mukherjee doesn’t even mention. But he does accurately indicate that Mrs Gandhi exploited the confusion and misrule under Morarji Desai and Charan Singh, compounded by the outrageous pantomime of the Shah Commission, so that people flocked to her as the only leader who could restore sanity to national life.

There is a flaw in Mukherjee’s Emergency argument. He may be right in claiming that ‘a chaotic state of affairs’ had been created by Jayaprakash Narayan’s ‘Total Revolution’, George Fernandes’ sabotage and the antics of the Janata Party which I described at the time as ‘all chiefs and no Indians’, worsened by dire national and international economic trends. Mrs Gandhi’s own view that India had become ungovernable like France before General De Gaulle also had some merit. But in that case, far from deploring the Emergency as ‘avoidable’ and a ‘misadventure’, Mukherjee should have the courage loudly to proclaim it was just what the country needed.

By that same token, he must applaud Ray as India’s saviour. We are told that like a helpless damsel in distress, Mrs Gandhi didn’t know which way to turn after the Allahabad High Court judgment of 12 June 1975 until Ray whispered in her ear that she could impose an internal Emergency under Article 352 of the Constitution. If so, Mukherjee should compliment him. Ray can’t be blamed for recommending the Emergency while Mrs Gandhi is praised for implementing it.

It’s no secret that the two ruling passions of Mukherjee’s political career were his devotion to Mrs Gandhi and dislike of Ray, the hapless Priya Ranjan Dasmunsi sharing some of the opprobrium reserved for the latter. It’s no secret either that the author had a fracas with Rajiv Gandhi. That’s not part of this story. But the reader senses a connection in the information that Rajiv included in his Cabinet the two MPs (Margaret Alva and KC Pant) who helped to defeat his mother’s government in the Rajya Sabha (where Mukherjee was leader) by supporting an opposition amendment.

It’s through such light touches, innuendoes and throwaway comments that Mukherjee makes his points and settles old scores. He flings no gauntlet, nor picks one up. His strongest criticism is levied through extensive quotations from one of the rash of exciting but inconsequential potboilers that appeared in the late 70s and early 80s. So frequently and approvingly, indeed, does he quote a minor reporter of that era that one shouldn’t be surprised if the original book was based on his briefings. The late Barun Sengupta (Anandabazar Patrika, later Bartaman) whom he calls ‘a good friend’, wasn’t the only journalist Mukherjee befriended.

The next two volumes of this trilogy will cover the years 1980–98 and 1998–2012. Mukherjee will render a service to historiography if he is less reticent in those two volumes with his personal insights and analyses. They are necessary to explain the Congress party’s decline, show how the organisation and its beliefs and values can still be relevant to Indian life, and convince readers that the flickering flame of secular democracy to which he and his heroine devoted their political lives has not been extinguished for all time. Meanwhile, it’s a matter of pride for India’s democracy that a former chaiwallah as Prime Minister is matched by a president who didn’t start school till he was ten, walking five kilometres every day barefoot.