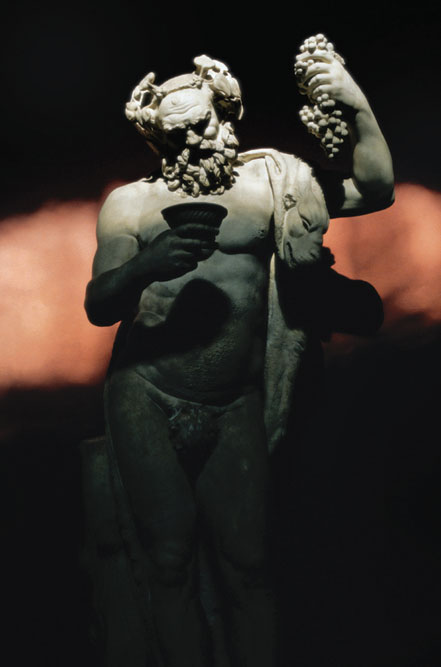 A HISTORY BOOK IS a prism through which accounts of the past stream through and transform magically into light. Rod Phillips in his comprehensive work, Alcohol: A History, delves deep into the world of one of the most sought-after fluids on this planet after water— alcohol—tracing its history back to the first signs of it in pottery of the Neolithic period which archaeologists excavated in China and elsewhere. This tipple was made more than 7,000 years before the birth of Christ. Alas, the quest stops there almost abruptly, for going further back in time is impossible since leather or wooden storage facilities of the pre- Palaeolithic era which could have stored the liquid have not survived to tell the tale.

The writer pinpoints three stages in the long life of alcohol: first, when people saw the beverage as a godsend, requiring it to be treated with reverence, and using it for religious purposes; second when they realised its potential to alleviate pain and other discomforts of the body; and third, when the fluid finally shed all its medicinal and religious associations and entered the secular world with the purpose of lubricating social interactions and entertaining the masses. The author’s eyes sweep across continents to sew together a tapestry of alcohol’s murky origin. Ancient people—Egyptians entombing their deceased kings or the Chinese holding the last rites of their dead—were clear about what should accompany the departed. Archaeologists have excavated wine vessels from burial chambers in different parts of the world. The accidental discovery of fermented fruits and the pleasant headiness they gave our forefathers might have made them relate drink and its effect to something God sent.

While it was Ninkasi who was the God of Drink in Sumerian belief, Osiris ruled in Egypt, Dionysus in Greece and Bacchus in Rome. Religious practices celebrating alcohol evolved around those deities. The gods varied, beliefs differed and rituals evolved in multifarious ways, but the drink that the ancients patronised remained the same across cultures. The author surmises that perhaps the light-headedness that the drink induced ‘felt like slipping from the mundane world and approaching the gods’. Taking a cue from ancient religions which celebrated the drink, Christianity too was influenced by and inundated with wine. The Old Testament is ambiguous about its approach to drink. This moral conflict will perhaps never subside. In modern times we see the Church, which once patronised the production and sale of beer and wine, laboriously trying to explain the act of Jesus turning water into wine at Cana. The temperance movement of the 19th century declared it was not fermented drink that Jesus made, but unfermented grape juice. But for the crusaders of prohibition who strove to scrub the Bible of positive references to the drink, the Christian ritual of transubstantiation—in which wine was seen as a symbol of Jesus’ blood—was harder to chip at. Ambiguity in how to approach the drink befuddled not only keepers of the faith, but affected secular powers too.

The authorities of different times and regions played hot and cold, sometimes encouraging the drink for the benefit of tax collections and sometimes restricting it for fear of unrest. Warnings were issued on how to drink moderately. From the Code of Hammurabi issued in Babylon in 1770 BCE—the earliest codifications intended to regulate the price and strength of beer—states have been trying to get into the driver’s seat, but in vain. In the 19th and 20th centuries, when the temperance movement gained strength, European countries tried to restrict the consumption of alcohol by enacting various laws. Were they helpful? The writer discusses in depth Russia’s never-ending fight with vodka. At the turn of the last century, first the Tsar and then the new Bolshevik regime took stern measures to stem the tide, prohibit alcohol and get a sober army to take on the enemy. Russia came to learn what the European nations that had dallied with the idea of a total ban had understood. The attempts of governments to turn people into teetotallers for their well-being were often half-hearted. There were also the tax revenues of alcohol to consider.

RELIGIOUS PRACTICES CELEBRATING ALCOHOL EVOLVED AROUND THOSE DEITIES. THE GODS VARIED AND RITUALS EVOLVED IN MULTIFARIOUS WAYS, BUT THE DRINK THAT THE ANCIENTS PATRONISED REMAINED THE SAME ACROSS CULTURES

Alcohol knows how to live on its own terms irrespective of the hurdles different regimes throw its way at various times. In Europe, temperance movements did not reach far. In the US, protests against the drink snowballed into a total ban on alcohol in 1913. The rest of the Western world, atop a volcano of such movements, waited to see what would come of the experiment. This book analyses the fallouts of that historic decision in detail. As we read, we realise how the US prohibition project was slowly undermined by a series of unlawful activities. Mafia mushroomed, moonshine flourished, men slipped into dark corners to sneak themselves drinks, much of it adulterated. After 13 years, the Act was repealed. You cannot turn a country dry when it is geographically surrounded by wet countries with leaky borders. The writer asserts that the policy’s failure cannot be pinned on the Great Depression, though it’s true that the latter caused deep despondency. One of the upshots of the experience was that women began to participate in a popular culture of drinking in public places.

The consumption of alcohol by women makes for an interesting exploration in the book. Right from the early days when men began enjoying community activity, the presence of women in the drinking place was abhorred. In Symposiums held by Greek men where they enjoyed discussions and debauchery, women were allowed only as musicians or as servers. It was thought that women who drank lost their moral bearings and were prone to become sexually promiscuous. The author refers to the writings of physicians like Hippocrates who believed that the warmth of wine and the ‘warm bodies of men’ aligned well, but the body of a woman ‘being cold and wet’ could not hold the drink properly. In Rome, men only had to state that their wives drank wine to obtain a divorce. But gradually, we see women stepping out from the shadows—as ale-women who brewed ale for their village folk. This did not last long. As towns grew, small establishments lost their appeal and were replaced by commercial enterprises which barred women once again. The patriarchy feared that the traditional role it had set for women—as caretakers of children and family—would be upset if the fairer sex dallied too much with alcohol. This could be the reason laws were made in different parts of the world at different stages to wean women away from the poison men gleefully drank.

‘The other’ had to face similar discrimination under colonialism. As Phillips etches it, pre-colonial times had indigenous people enjoying mildly alcoholic beverages to their heart’s content. But when the West’s high-alcoholic-content distilled beverages swept through the colonies, they overwhelmed local habits. There were regions which had never even experienced alcohol before these settlers came. Fermentation was not known to North American cultures, the author writes, and the land’s original inhabitants had no words to describe alcohol or its effect. Yet, it soon became an exchange commodity. Colonies were drained of precious resources for a drop of the vicious potion the West brought.

Phillips concludes the story of alcohol on a positive note. In many places, the drink survived on the claim that rivers and other freshwater sources near habitations were too polluted to be potable; fermented drinks were the only safe option for hydration for many centuries, patronised even by physicians. But the bottom of this argument was knocked out once the water supply system improved in Europe. Moreover, the Church and the monasteries that ran breweries and distilleries in the Middle Ages severed their ties with drink. Alcohol faced its greatest challenge in the 20th century when it had to face bans and prohibitions in different parts of the world. But it was so deeply entrenched in Western cultures that it could not be uprooted. Still, just as economically advanced countries began to liberalise their stance on alcohol, realising the futility of bans and prohibition, Phillips notices a steady decline in consumption.

Phillips leads us behind the curtain to show the economic and political significance of various approaches to alcohol in different periods. We we learn, for example, that the British embraced gin in the 18th century, leading to the notorious gin craze of the time which was brought on not by any generic quality inherent in the drink, but as a fitting reply of a Protestant England to a Catholic France that banked on exports of wine and brandy. The book is studded with such gems, painfully gathered and studied down to its last detail.

Though the analysis of alcohol in the Indian context in particular and Asia in general is incomplete and wanting, the complex picture we get of its sway over the world throws the wave of prohibition in this country into perspective. Wish they’d taken a leaf out of this wonderful book before they took up their cudgels.