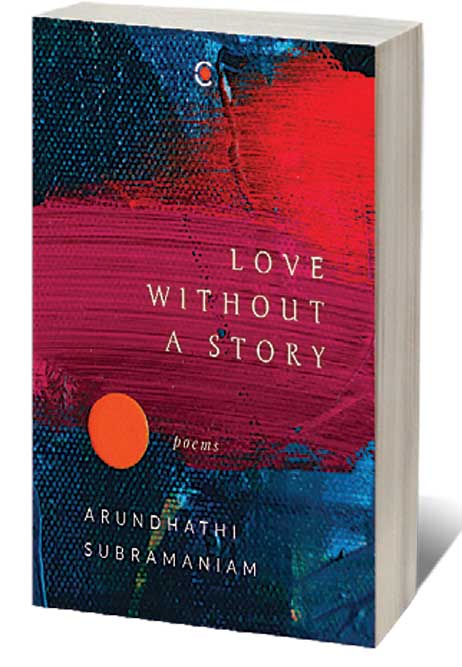 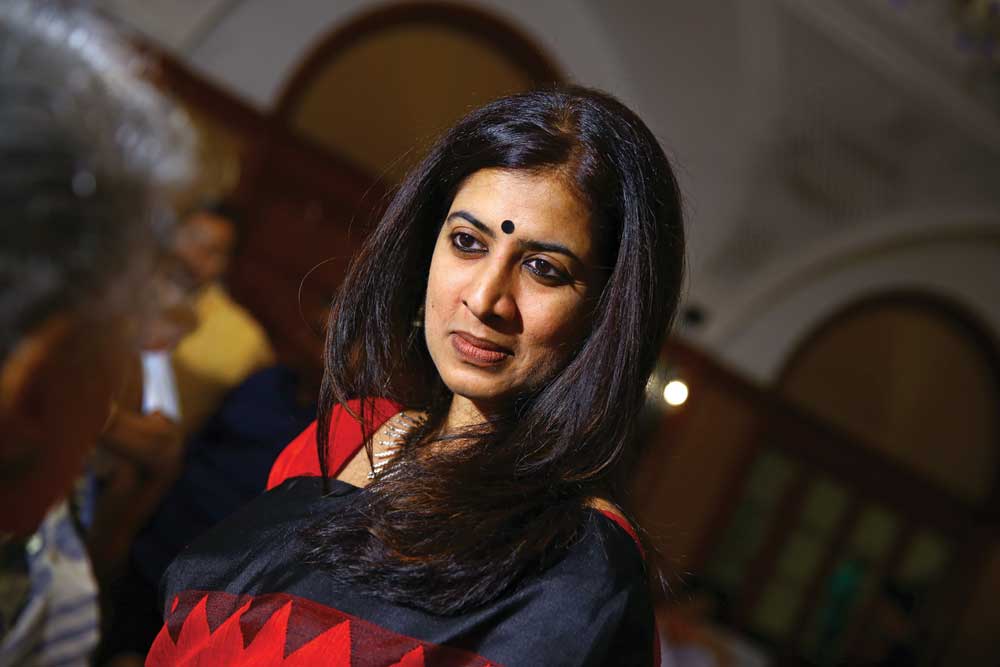 WHEN I FIRST hear Arundhathi Subramaniam read her poetry in person, I am struck by the gravitas she brings to the reading— her voice commanding attention. She doesn’t read from a page. She doesn’t need to. “The voice is an instrument as much as the pen or the keyboard, isn’t it?” she asks. “I do read many poems from memory. Not all, but many. I don’t actively learn them by rote. For me, tasting a poem on my tongue is an integral part of creating it. That explains why I remember many of the poems. I’ve known them in their prenatal stages, as it were.” Unlike an actor, she doesn’t “infuse drama into a reading.” She says, “You just need to follow the poem— allow the rhythm and contour of word, pause and sound to lead you. Reading a poem is also about trusting it.”

Five years after the release of her last collection of poems, the critically acclaimed When God is a Traveller, (which was a Poetry Book Society Choice and was shortlisted for the TS Eliot Prize) she arrives with a new collection, Love Without A Story (Context; Rs499;107 pages). The day before the book went to print, Chennai-based Subramaniam wasn’t yet certain what the title would be. After a final spell of uncertainty, she says, “there were suddenly no more doubts. I can’t conceive of another title for the book now.” She chose the title because the “lyric poem always seems to me to be straining away from story. It uses a story as springboard to leap into another space.” More importantly, she says, “the story of our lives, the drama, the kit and caboodle of plot, interests me less and less. I’m more interested in what remains when the story is done. And something does remain. Not sentiment. Not nostalgia. But something deep and expansive, capable of laughter, that is inclusive without being stifling. You could call it friendship. You could call it love.”

Love Without A Story heralds a new era for Subramaniam’s poetry. I Grew Up In An Age of Poets, the opening poem, is an acknowledgment of time’s passing, of poetry’s evolving fronts from one generation to the next. “It set me thinking,” she says, “about myself as part of what is now turning into an older generation in the cultural scene. What kind of baton-carrier does one want to be? Having had some wonderful and not-so-wonderful guides along the way, I know it’s a fine line between being mentor and tormentor!”

The poems revisit childhood, ponder friendships and ageing, document her father’s passing, share lessons from travels, and contemplate the unknowability of parents. There are clues about time’s passage embedded across poems that drawn together form a picture of a person more at home with herself than ever before. In an elegy, Deleting the Picture (for AA (1967-2015)), she notes, ‘We’re past the clumsy brutality/ of eighteen…’ She finds that there is ‘No edge/ to our voices anymore/ when we say Zen/ or Gramsci.’ ‘It’s the body/ that grows parochial,’ she writes in And Where It Might End, ‘…the body wants to be nowhere/ but here.’

In Been There, she surmises, ‘It’s easier now, / the heart’s more my own, / the windscreen less blurry.’

Subramaniam’s voice is self-assured as she takes the reader through the poems, her tone bold but careful whether she is expressing certainty or highlighting how little any of us know and comprehend about our own lives.

Several poems are inspired by women who have shaped Subramaniam including her mother who she describes as ‘nurturer, friend, ally, guide.’ The poems, Song for Catabolic Women, When Landscape Becomes Woman, and Goddess, read like anthems for womanhood, for female variability and power. She is generous in her understanding of women’s lives. In one poem, she forges pairs of seemingly contradictory attributes—‘capable of wisdom / even as we rant.’ In another, she recalls a childhood memory when she first saw her mother, ‘the background and foundation’ of her life, as a person in her own right.


“Tasting a poem on my tongue is an integral part of creating it. That is why I remember many. I’ve known them in their prenatal stages”

She says, “It was only after the manuscript came together that I realised that women were dominant in these poems.” The Goddesspoems demanded, she believes to be written. Her interest in the goddess archetype “moved from the theoretical to the intensely personal” when she fell under the spell of Linga Bhairavi, a local goddess in an ashram in Coimbatore. She says, “I’ve experienced her as guide and companion all at once—intimate, explosive, unafraid to get involved in the minutiae of her bhaktas’ lives.”

The collection also holds a poem sequence, The Fine Art of Ageing, inspired by Avvaiyar, the great woman poet of Tamil literature. Forty-six-year-old Subramaniam explains that she’s fascinated by Avvaiyar “as female mendicant, as spiritual wanderer, as woman poet, as vagabond teacher, and as Crone, that enigmatic archetype that intrigues me more and more as I grow older.” She sees A Song for Catabolic Women, as her ‘turning fifty’ poem written as an “anthem to women who are no longer tyrannised by biological clocks and social expectation, women who see through culturally vested interests and deceptions, women who aren’t trying to impress, who, when they turn away, ‘aren’t really thinking of you’.”

The poems about her parents are some of the most tender in the collection. She writes, ‘They vanish as abruptly / as they appear.’ Loss permeates these poems—the poet’s father passed away two years ago. “Where do they go, these people we’ve known forever?” she asks. “How can they exit so completely, so decisively? Nothing prepares you for that moment: when those who’ve cried wolf several times over suddenly turn into wolves themselves— disappearing, soft-pawed, into the night.”

The world of Indian poetry has changed since she first entered the space in the late ’80s. Once every fortnight, she’d make her way to her Poetry Circle meetings in Churchgate, or to a conversation with Nissim Ezekiel at ‘Sanman’ (the Udupi restaurant outside his PEN office) to discuss a poem. She says, “There was the exhilarating sense of community in an utterly indifferent universe. I was acutely aware of the marginality of poetry. The Indian novel had begun to count, but Anglophone poetry remained dowdy and unglamorous.” She never really believed it would change. “And now it has!” she exclaims. “There is a palpable excitement about poetry in the air now. You sense it everywhere. Poets are suddenly wandering bustling in and out of festivals, accumulating frequent flyer miles, posing for selfies! It’s wonderful, of course. Amusing too!”

“What kind of baton-carrier does one want to be? Having had some wonderful and not-so-wonderful guides, I know it’s a fine line between being mentor and tormentor”

She finds however that popularity and networking come with their own perils. And yet, she points out, “the real work is always quiet and hidden and solitary. That will never change. I guess the poets with whom I feel a real kinship are those who smell of those quiet, hidden places.” Her own writing is fed by walks (especially along the beach), yoga, plane rides, watching dance performances, sitting at the Linga Bhairavi temple and soaking in the energy of that shrine, and stimulating conversations that “happen with only a few friends, the kind when you are so vulnerable and present, you’re almost skinless.”

As the editor of the Indian domain at the Poetry International Web, she approaches the work of poets with respect and attentiveness—choosing “exploration” over “canon-building.” She enjoys focusing on just two or three poets in each issue. “I have often wanted this kind of quiet focused attention on my own poetry. The simple act of deep-focus attention is one way of honoring an artist’s work.” She finds that writing on poetry today tends to lock up the work with signboards such as ‘surrealist poet’ or ‘exiled poet.’ Though useful descriptions, once they turn into catchphrases and conclusions, she finds that you have effectively sealed off the work.

Subramaniam is drawn to poetry “for a host of sensual reasons— rhythm, sound, verbal texture, the intoxication of kinetic language,” but she also appreciates the lyric poem “as a very profound and creative way of engaging” with herself. She explains that the two draws aren’t mutually exclusive—“ valuing self-understanding isn’t about devaluing craft. Working at your craft is part of the journey of becoming yourself.”

She has also found herself in places “where no language could enter.” The final poem in When God is a Traveller, titledPoems Matter, ended with this realisation, ‘It’s taken a long time to understand/ that poems matter/ because they have holes.’ Recalling that line, she elaborates, “These were holes within myself that terrified me.” Holes that led her eventually— after much struggle—to her spiritual guide, Sadhguru.

“The wonderful thing about finding an authentic spiritual path,” she finds, “is that it doesn’t make you a clone of anyone else. You don’t become like your guide, or like people you’ve admired. As your inner life grows more decongested, as your internal bottlenecks clear, you find yourself becoming more and more yourself.” When poetry returned to her afterwards, it returned differently—“ There is more freedom and joy in the making of poems now. More openness. More space for a real sense of wonder.”

She wishes supportive spiritual ecosystems existed in which “people are not embarrassed or apologetic about exploring the ‘spiritual’” and “people are encouraged to seek, and not bullied by purveyors of faith into rigid religious stances.” She stresses that a supportive ecosystem is “one in which you realise that deepening your engagement with yourself can be nourishing and transformative for you and the world you live in. There is nothing escapist about it.”

She sees numerous complementary parallels between spirituality and poetry—“Both are about coming to terms with uncertainty. Neither is about easy conclusions. Both refuse to rest content with inherited truths, with readymade language. Between the frozen language of slogan and sermon, billboard and manifesto, both try to chart their own path. Both seek a firsthand experience of truth, not a secondhand wisdom.”