I Was That Girl Who Was Supposed To Be Dead

In her memoir, Eve Ensler, author of The Vagina Monologues, talks about how her work in the Congo and her battle with uterine cancer enabled her to re-inhabit her body. In the following excerpt, she tells us how drugs almost destroyed her—and how pot might have helped save her life 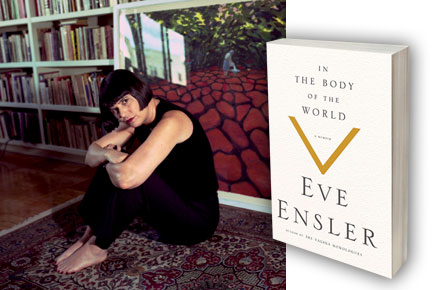 In the following excerpt from her memoir, Eve Ensler tells us how drugs almost destroyed her—and how pot might have helped save her life


It seems a lifetime ago that I smoked pot on my way to school, sitting in a tiny sports car driven by a huge guy named W. I would be wrecked by homeroom, starving for munchies by second period. W, the son of a famous sports star, and I had gone from being a rising football player (him) and an overly enthusiastic, slightly desperate cheerleader (me) to a stoned-out dealer and a hippie chick in about three weeks. The transition was seamless. I knew that W, who reminded me of Lenny in Of Mice and Men (those huge hands), had a crush on me, so I was happy to be in his car every morning, sharing his stash. For my sixteenth birthday he gave me a tin filled with an ounce of grass and hundreds of black beauties, which kept me awake for the rest of the year, compulsively talking and constantly licking my lips. I did better on speed than on pot, which made me paranoid, and I was already paranoid. When I smoked pot, all I did was apologise. I’m stoned. I’m sorry. But that didn’t stop me. I loved arriving at school, stepping out of W’s incredibly cool car in a cloud of reefer, sunglasses concealing my bloodshot eyes, as Janis or the Grateful Dead blared in the background, and wobbling onto the plush green lawn in my torn blue jeans and Frye boots. I had no desire to be present. I despised Scarsdale. I was an outcast from the get-go. Never pretty enough, rich enough, thin enough. Never having the right friends, house, or clothes. The ’60s, well, really, drugs, freed me. I got stoned and stopped giving a shit. I see now it was a momentary solution. Drugs and booze saved my life until they started to destroy it. From the first drink something hard, taut, and wired released in me. I was suddenly fun and funny—the life of the party. I was that wild girl, the one everyone secretly thought would be dead by 21. The one who always pushed the edge, drove the car too fast with no hands on the steering wheel at midnight, the one who dared the boys and, when they were afraid, led the way leaping off the high quarry ledge, the one who got drunk with much older guys in dark joints that no one else even knew existed in a place like Scarsdale. The one who dated Billy, the heroin addict who was at least seven years older. With his Harley and his cool black motorcycle jacket, he would pick me up every day and we would spend the afternoon at his house, Billy nodding off, me mad methadrine talking. I was that girl who couldn’t stop having sex. Sex relieved the pain and I was almost always in pain, so I needed a lot of sex. My life was spent managing the pain. I did heroin the night before my French SATs and was still so stoned the next day, I drew a huge black X through the entire exam. I was that girl who got arrested for stealing a huge bag of sunglasses from Genung’s department store in White Plains for my friends or my wished-for friends, in order to ratchet up my popularity. I was that sad, wild girl, who was clearly the outcome of something that had happened or was happening to her inside her house, but in those days no one knew the signs or would even admit that such a thing was even possible. I was that girl who ran away after my father found me on the phone with Beth Post, my girl crush, the most beautiful blond girl (also a theme throughout my life). My father went crazy, humiliated me on the phone, called me horrible names for hours, whipped my legs so hard with his belt there were welts, then told me he was sending me to a school for juvenile delinquents and threw me in the basement to sleep with the dog. I was that girl who took off in the middle of the night and walked miles in the dark (diving into bushes to dodge police) to the other side of Scarsdale, where I snuck into my best friend Ginny’s house, up into her attic bedroom, and woke her up pacing, out of breath. I was that girl who slipped out every week and drove with W and his hippie friends to Manhattan to the Fillmore East (with at least a pound of hashish under the seat) to hear Grace Slick or Tina Turner. I was ready for anything. I was that wild girl who never thought about consequences. When I was 17 and my parents were out of town, I flew to Berkeley, California, from New York and met Jimmy, the coke dealer. I spent two days testing coke and did so much, I had no ability to tell one crop from another. All I remember is eating a cooked artichoke dipped in warm butter. I flew back with a pound of pure coke (a thousand dollars’ worth) in the pocket of Billy’s black motorcycle jacket, which he had loaned me for courage. Imagine trying to get through today’s security with a pound of coke in your pocket. I was a suicide girl on a radical mission to get out—out of Scarsdale, whitebourgeoissocialclimbingshoppingmallstifling, out of my family, out of my body—and drugs were the means of transport.

I was that girl in college who lived half naked, an exaggerated exhibitionist, an out bisexualalmostlesbian, guilt-tripping and seducing every straight woman I knew, sleeping with my roommate during the week and with men on the weekends when her boyfriend came to stay. I could never seem to land in either court. My hunger for flesh and touch, breasts and penises, mouths, love, and sex was massive, urgent, and indiscriminate. I was that girl who became a bartender in a redneck bar in Vermont and brought booze to all my literature classes. I was the one who slept with most of my professors and thought that was simply part of the course. I was that girl who gave the commencement speech at college graduation and spoke out against racism and sexism and then sat down in my seat in my cap and gown and drank a bottle of Jack Daniel’s passed to me in a brown paper bag.

Later, when I’d spent all of the thousand dollars that my father gave me at graduation (in about two weeks), I was that wild girl turned mundane tragedy. I was that girl who fell into my twenties unglamorously and compulsively promiscuous, drunk, and weepy, who ended up working in a Mafia after-hours club, sleeping with a delicious-smelling hit man, waitressing in black tights and an emerald tuxedo top with cheap diamond buttons. I was that girl who woke up one night from a blackout to find Frankie, one of the good-looking Mafia owners of the joint, banging my head against the bar, ripping off my necklaces, while the other owners watched without even thinking of intervening. I was that girl who went out every night praying someone, anyone, would finally put me out of my misery. It was on the hard ground of the Old San Juan airport parking lot in Puerto Rico, having just been beaten up by my then boyfriend, eventual husband, that for whatever reason, and to this day it confounds me, I got down on my knees and swore to a God I didn’t believe in that if I were granted the return of my mind, I would change. As I gripped the broken high heel of my shoe, and as cheap black makeup dripped down my swollen, drunken cheeks, I knew I needed to offer something huge because I had fallen so far. I was that wild girl who had totally lost my way, squandered my talents and gifts, alienated those who loved and believed in me, betrayed lovers and wives (an entrenched pattern born of an early love triangle— seducer father, perfect mother). I was that pathetic girl who had spent those central formative years frying my brain molecules. I had lost huge opportunities because of my arrogance, defiance, and righteousness. Putting down the bottle and the drugs was the hardest thing I ever did. At 23 I was sober, totally broke, and regularly visiting the emergency room at St Vincent’s Hospital in the Village with anxiety attacks. I didn’t have a dollar to my name. I didn’t even have a bank account until much later. I lived in a fourth-floor walk-up on Christopher Street for $120 a month and sold Avon to drag queens on the block. I taught writing in Harlem at a school for pregnant girls where full-bellied teenagers spent most of the class sucking their thumbs, trying to calm their poor terrorisedsoontobemotherwithoutaclueordesire nerves. I had nothing with which to self-medicate. There was no way to silence the avalanche of self-hatred, criticism, and fear that had been unleashed once I put the booze and drugs away. I was addicted to Tab and Vantage cigarettes and was a serious vegan, which meant I was eating pickled mushrooms and getting very little protein for my very troubled brain. Honestly, I don’t remember eating. But I didn’t drink or drug.

Now, 32 years later, pot was the way through chemo and I needed a way through. The most surprising people were instantly out copping for me. As most of my friends in my present life had never known me at my lowest or been with me when I drank or drugged, there was much excitement at coming over to watch me get high. It was theatre. It was sport. I was suddenly a pot- smoking, meat- eating bald person with a bag. A holiday.