I know what you’ll read this summer

Ranging from old school murder mysteries and a New York City cop drama to a World War II whodunnit and a weird little railway adventure, six thrillers for this summer 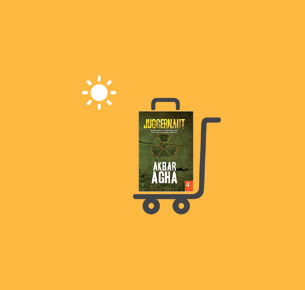 When feisty Jenny reports an abducted aunt, earnest young railway detective Jack Wenlock is soon off on a surreal adventure, full of foggy pubs and roiling teapots. For it is 1947, the railways are about to be nationalised and he is investigating the 1915 disappearance of 23 nuns off the 7.25 Swindon to Bristol Temple Meads. A rescue party of fellow nuns was armed with Bergman M15 guns and Luger side arms, Jack discovers—and the plot, at last, thickens.

There are few capers as charming as this summer’s THE CASE OF THE ‘HAIL MARY’ CELESTE (Bloomsbury, 352 pages), a mad and whimsical detective story featuring Railway Goslings, a legendary cadre watching over God’s Wonderful Railway. MALCOLM PRYCE, whose Aberystwyth series has earned him the title of ‘king of Welsh noir’ (Sunday Telegraph), is a rare talent. The very British courtship he describes (Jack and Jenny are soon sweetly besotted) is sprinkled with esoteric railway lore. For, most romantic are the beautiful descriptions of gorgeous old steam engines: ‘Her arrival slammed into the bridge like a giant hammer, throwing an earthquake into my lap. She slipped under the bridge like a whale blowing spume—a delicious fog that filled my nostrils and heart with the intoxicating scent of nursery smells: brimstone and smoke, coal and scorched steam, hot oil

‘One forty-five a.m…. the sound of tires rolling over a side street full of shattered light bulbs was like the sound of Jiffy Pop achieving climax, the aftermath of a set test between the Skrilla Hill Killaz from the Coolidge Houses and the Stack Money

Goons from the Madisons, four kids sent to St. Luke’s for stitches, one with a glass shard protruding from his cornea like a miniature sail.’ THE WHITES (Bloomsbury, 352 pages) promises to be the big impact New York City cop thriller of the year, with fast- moving action and dialogue to match any book or movie of this genre. HARRY BRANDT is the pen-name of writer- screenwriter Richard Price, who has authored eight novels, including Lush Life, and written for film and TV (notably The Color of Money

and many episodes of The Wire). You’ll recognise his hard-hitting prose in this new crime novel, which harks back to the ‘run-and-gun’ days of the 90s. A ‘White’ is the nemesis who got away, and every cop has one, we are told; this sets the stage for ageing Billy Grave’s quest for justice. Once full of promise, Billy has lost the plot; his career has been drifting after the accidental shooting of a 10-year-old ,and he is stuck as sergeant on Night Watch. But one day he discovers the ‘White’ of an old friend, and the quest for vengeance begins all over again. To exact it, he will need to resurrect the Wild Geese, a ‘preternaturally proactive’, avenger-like crew of policemen new to anti-crime, of which only five members remain.

‘If Tenzing had known what was going to happen next, he would have wished he were dead.’ There’s no shortage of foreboding last lines—Tenzing’s heart is ripped out of his chest, so the priest who finds him, in Mathura’s Krishna Janmasthan Temple, thinks it is a ruby—in THE CURSE OF SURYA (Random House India, 320 pages), a homegrown thriller. Sangeeta Rao, our heroine, a reporter for Channel 7 in Singapore, is rushed to Agra on a special assignment. There, she encounters Welshman Alan Davies, travelling under the guise of an Oxford professor, at the Taj Mahal. A terror attack on Mathura’s temple soon sends the two on the run, joined by Frenchman Anton Blanchard. As the two decipher cryptographs and try to throw SP Nisha Sharma off their scent, they travel everywhere from Bangalore to Dwarka. What is everyone looking for? The coveted Shyamantaka of the Sun God Surya, missing for 5,000 years. The execution might be average— there are long-winded spinoffs on the battle of Kurukshetra and Krishna’s divine form, and the action is choppy at times—but the idea is worthy. In his note at the end of the book, the author, DEV PRASAD, an IT professional who has written a book on Krishna, notes the mystery of Dwarka—‘Did a city exist hundreds of miles underwater?’—and the question of the Shyamantaka—‘Was [it] the same Kohinoor diamond taken by the British from India and currently kept in a museum in the UK?’. These are among other questions occasioned by his Brij Parikrama, and if you are interested in this subject, you will enjoy a thriller taking up the challenge.

In the summer of 1942, German policeman Bernie Gunther is made to speak about his work at the infamous Murder Commission at an international crime commission conference. He lectures on the evils of Fritz Germann, who taught him that the most ordinary people commit the most extraordinary crimes, and the irony of the backdrop of Hitler and his Gestapo is not lost on any reader of THE LADY FROM ZAGREB (Quercus, 464 pages). The action kicks off when an old friend asks Bernie to conduct a simple surveillance mission which leads to something much more complicated. A year later, after the horrors of the Eastern Front, he is tasked with locating the Yugoslavian father of Dalia Dresner, Germany’s Greta Garbo—at the request of Goebbels himself, that murderer of 45,000. Scrupulously recorded in simple prose, this straightforward historical thriller (featuring real characters and events) spins out as a long, lugubrious read. For, Bernie is a solemn, constantly churning figure, given over to prolonged reflection. In one moment he remarks that Weimar Berlin suited him better, and in the next breath acknowledges that ‘The Weimar Republic had been the most democratic of democracies and yet, like all great democracies, it had been a little out of control’. Even, poignantly, what is today that ultimate, inadmissible truth: ‘Everyone was Aryan now, whether he liked it or not’. PHILIP KERR, author of countless fast-paced novels, including Dead Meat and Hitler’s Peace, leaves us with the promise that Bernie will return in in 2016 (with The Other Side of Silence).

ORIENT (Simon & Schuster, 624 pages) opens with a taut, gripping shot of a boy who is the face of runaways all over America: propelled forward ‘as quietly as planes overhead, something moving at a terrible speed out of the corner of your eye and gone by the time you look again’. What follows is a literary murder mystery which is most riveting in the moments in which CHRISTOPHER BOLLEN focuses on the fallout of the American dream. The village of Orient, located on a halcyon stretch of the East Coast, is shaped like the body of a woman for Mills Chevern, the anonymous orphan who takes his name from a guy he met on the road. It is a flame to Paul Benchley, the lonely architect who takes him to his home outside the city ‘to save him’ from drugs and the temptations of the city. Ultimately, the place comes to represent the clash between the urban and suburban, bohemian and family-maker; for, a committee of determined locals are coming up against the limitless resources of wealthy city-dwellers who seek out new hideaways, even as the body count rises. Bollen is wonderful on the anomie and ambition of artists and housewives, but the murders become somewhat incidental in the scheme of things—despite the ominous quality of these stubborn locals, capable of doing anything to persist outside the province of time. The superb character sketches Edmund White praises—’draw[n] in the crispest, blackest ink’—rival even the fun mutant monsters which float off the ocean and the identity of a prolific killer.

What’s more predictable than a murder mystery involving Pakistan’s nuclear programme and a CIA agent? JUGGERNAUT (Tara Press, 264 pages) is a slim, old-fashioned thriller spun around the last words of a dying man. His ‘Jagernath’ is all Captain Gul Khan has to go on, as more die on his watch: he has prevented an assassination attempt on an important military general, but Eve (a ‘dirty blonde’, of course), ends up dead in a hotel

in Peshawar, as does a psychiatrist tending to the men who control Pakistan’s N-bomb. This time the clue is written in blood, next to the body: ‘A2 MC Bodmas’. The author AKBAR AGHA, an ex-diplomat from Pakistan, puts his knowledge of the rites and rituals of politics into this topical tale out of a man’s world. That there is a leading woman, foreign minister Sadia Sharif who likens herself to the Queen of Hearts, is heartening. In fact, she is quite a scene-stealer, musing on the Pakistan flag as it flutters by Mogul-style windows ‘reminiscent of an era when her ancestors ruled the length and breadth of India’ (Agha compensates with a quote from Tagore at the very end, of course). But the trite lines—‘Pakistan and America had a love affair from the very beginning’ muses Khan, tellingly in bed with ‘golden goddess’ Eve—may dissuade even the most curious of readers.

BOOK YOUR DATE WITH…

Two Years Eight Months and Twenty-Eight Nights
by Salman Rushdie
(September, Jonathan Cape)
In his first novel since The Enchantress of Florence (2008), India’s most controversial literary export returns with his twelfth book, a modern- day Arabian Nights which promises to feature Rushdie’s trademark magic realism in a mix that references everything from Mickey Mouse to Bravo TV (Publishers Weekly). In it, a jinn princess called Dunia and her children feature in a war between lightness and dark lasting a 1001 nights (the period referred to in the title).

Go Set a Watchman
by Harper Lee
(14 July, HarperCollins)
Is there any reader who hasn’t wept over the American classic To Kill a Mockingbird ? One of the most anticipated book events of the year, the novel which Harper Lee submitted to her publisher before her 1960 breakthrough was discovered late last year. Twenty years after we left Scout and her father Atticus Finch in Maycomb, Alabama, we return to the scene of the action, now in 1950s America in what promises to be the most exciting comeback an 89-year-old writer has managed.

Big Magic: Creative Living Beyond
Fear by Elizabeth Gilbert
(September, Bloomsbury)
The author of 2006 bestseller Eat, Pray, Love (over ten million copies worldwide and adapted into a film starring Julia Roberts) is back with a self-help book, sure to appeal to her international fan base. This time, she’s talking about creativity, sharing inspiration and getting us to tackle our fears through non-fiction, in an end of summer special.

Finders Keepers
by Stephen King
(June, Scribner)
This sequel to last year’s modern detective tale Mr Mercedes is yet another blockbuster from the king of commercial fiction. In this tale, a young boy comes across money and notebooks which were stolen from a famous writer—as the thief gets out of jail. Fans can expect a good, old-fashioned action story told in trademark style.

The Girl in the Spider’s Web,
Millennium Book 4
by Stieg Larsson and David Lagercrantz
(Knopf, September)
One of the most universally appreciated works of commercial fiction, The Girl with the Dragon Tattoo sparked a revolution in terms of action heroines; Lisbeth Salander, its damaged yet determined avenger protagonist has sailed into countless imaginations through its best-selling series and movie spinoffs. This summer, the book that the late Larsson could not finish before he died will be released— daringly completed by a second author.