“I am a Bengali writer, I need to live in Bengal” 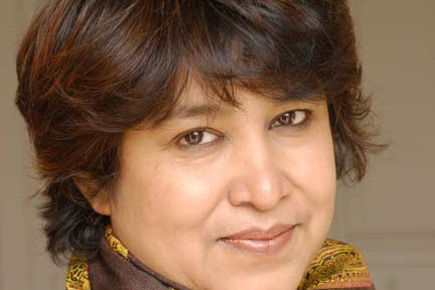 
In 2007, exiled Bangladeshi writer Taslima Nasreen was denied permission by the Left Front government to return to Kolkata. She was forced to flee from the city – her home since 2005 – amid street protests calling for her visa to be revoked. The firebrand author, who now lives in New Delhi, sees in the historic fall of the Left and an equally historic rise of the state’s first woman chief minister, possibilities for real change and a long-awaited reunion with her beloved Bengal.

Q What would you like to say to West Bengal’s new Chief Minister?

A It was amazing to watch Mamata (on the day of the swearing-in ceremony) walk through the crowds from Raj Bhavan to the Writer’s Building (the state secretariat). Eighteen years ago she was thrown out of there. As a woman I felt really proud of her. After 34 years in power, it is time for the Left to think about their reforms. Thirty-four years of power… it can make a sane people go insane. I support Left ideas, but still I supported Mamata. She is a strong woman who made the impossible possible.

A national daily declared her victory with a headline that read ‘Didi is the new Dada’. This is a masculinization of power.  When someone is powerful, people don’t like to think of her as a woman or as feminine. Vulnerability is feminized, and power is masculanized. I am against this.

Everybody talks about bringing back the Tatas and building flyovers. To improve infrastructure, build more industries, more flyovers – these changes can be brought about by any government. The problem is that gender issues are not taken seriously by many governments.

As a woman Chief Minister, if she encourages social movements against anti-women traditions and customs, that will be a really big change. It is not easy for a government, without a feminist movement, to change age-old traditions.  I hope Mamata will bring change to society, that she will improve the condition of women and free them from patriarchal structures and sexual slavery.

Q On returning to Calcutta

A I hope Mamata will allow me to go Calcutta. CPM threw me out in 2007. Since then I have been waiting to go back. I am a Bengali writer, I need to live in Bengal. The Bangladesh government has shut its door. They prevent me from going to Bangladesh. West Bengal is only part of Bengal left for me. As a writer, it would be a disaster for me if I have to live in the West or outside  Bengal.

I am waiting here in Delhi for the Green signal, the Green (laughs) signal (Green is also the colour of the Mamata Banerjee’s Trinamool Congress Party) to go back.

A After being thrown out of West Bengal, I was in so many countries (laughs). I got a fellowship from New York University. So I spent a year there. I always came back to Delhi to extend my resident permit. Last year, instead of the routine six-month extension, I was given a one-year extension on my residence permit. And I was allowed to live here. Since then I have been living in Delhi.

I travel a lot. I’ve been occupied with programmes in Europe and in America. I took part in many conferences on women’s rights, human rights, secularism, freedom of expression… I  wrote some books. Some of my books were also translated. I am constantly writing. I am now writing a novel and working on my autobiography. I am also writing poetry.

A I don’t have many friends here. I live a very low-profile life here. It is just me, my cat and my writing. I am happy. But I will be happier, if I can go back to Calcutta. I am a Bengali. I want to live in Bengal. I want to hear and speak in Bengali. I love it. It is important to me.