How to Tame Your Dragon

Bhutan is a nation concerned about the effects of the sudden changes it’s encountering. No wonder its delegates at the country’s first lit fest have their energies focused on preserving its oral traditions. 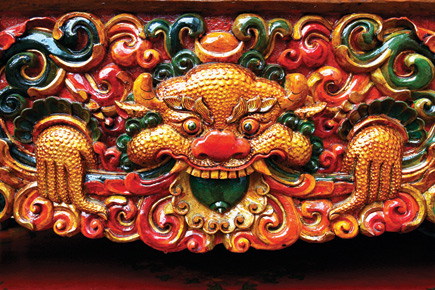 In its pursuit of happiness, Bhutan and its literature are trying to find a balance between tradition and modernity.


In April 2007, Bhutan, the dragon kingdom, held mock elections to prepare its people for the country’s imminent shift to democracy. The Bhutanese, who both revered and feared the century-old monarchy, were voting for what was an abstract concept, a faceless political party. Rather, a colour—red, yellow, blue or green, representing the four dummy parties. Unsurprisingly, it was the Druk Yellow Party, a colour that stands for tradition, which swept the polls. People had chosen the royal colour. “They voted for continuity, they voted against change,” says Sonam Kinga, MP, who also documents and translates katsoms, a traditional form of Bhutanese poetry.

Change is the country’s biggest worry today. For a nation that’s only recently ended its isolation—as much with the entry of cable television and the internet in 1999 and the infatuation of Bhutanese youth with these ‘liberating technologies’ as with its participation in the globalised world—the fear is that tradition will be the main casualty. “The most popular TV programme last year was Miss Bhutan [the country’s first national beauty pageant],” complains Kinley Dorji, founder of Kuensel, one of the six newspapers in Bhutan. He points out how it changed the perception of beauty in women. Where “strong, healthy women” were once considered beautiful, people are now harping after swimsuit bodies [the swimsuit section of the competition, incidentally, was held behind closed doors].

Undeniably, Bhutan is at an interesting stage of its history, attempting to, in the words of its first Prime Minister Jigmi Y Thinley, “balance modernity with tradition, the material with the spiritual”. In a country that seeks idealism in the way policy is conducted, epitomised in its emphasis on Gross National Happiness, there is a serious effort both on the side of the State and a section of its people to give direction to this cultural transformation. “Change is intrinsic. But some degree of balance needs to be restored. We’re committed to better change,” says Dasha Karma Ura, director of the think-tank, Centre for Bhutanese Studies. It’s to be seen whether in its quest for cultural integrity, those with influence will tip the balance themselves.

This priority—of preserving the old—is clear even when it comes to literature. At Mountain Echoes, a literary meet organised in Thimphu by the India-Bhutan Foundation in collaboration with literary consultancy Siyahi, it was clear that writing and publishing in Bhutan is in its infancy. It’s a country with printing presses, but no publishers. Getting a book out is easy, but original writing is rather rare. The emphasis is on protecting its largely oral tradition from the onslaught of the 40 odd entertainment channels showing on television.

If Sonam Kinga travelled from village to village, requesting elders to recite katsoms they could remember, ethnomusicologist and musician Jigme Drukpa did the same for the country’s folk songs, recording for himself the largest archive of traditional Bhutanese music. Both have historical significance, providing a social and cultural context to the times in which they were written. While the themes of katsoms range from love to taxation, the folk music were songs sung during festivals, to labour and construction songs, to even those sung during long travels on horseback. Then there is writer Kunzang Choden, who incidentally has also been published by Zubaan Books in India, who writes on Bhutanese folklore. She seeks to preserve folk stories, not just by putting them down on paper for the first time, but also by “unravelling them” in storytelling sessions along with Siok Sian Pek-Dorji. The latter, director of the Bhutan Centre for Media and Democracy, is an energetic crusader for the preservation of Bhutan’s cultural identity.

That’s not to say that modern Bhutan doesn’t have a voice of its own. Of its 18,000 registered net users, many use blogs and social networking sites to anonymously raise points on freedom of expression or the rule of law. Change is forcing this ‘coffee-table country’ to look within. It will have much to speak and write of in the near future.