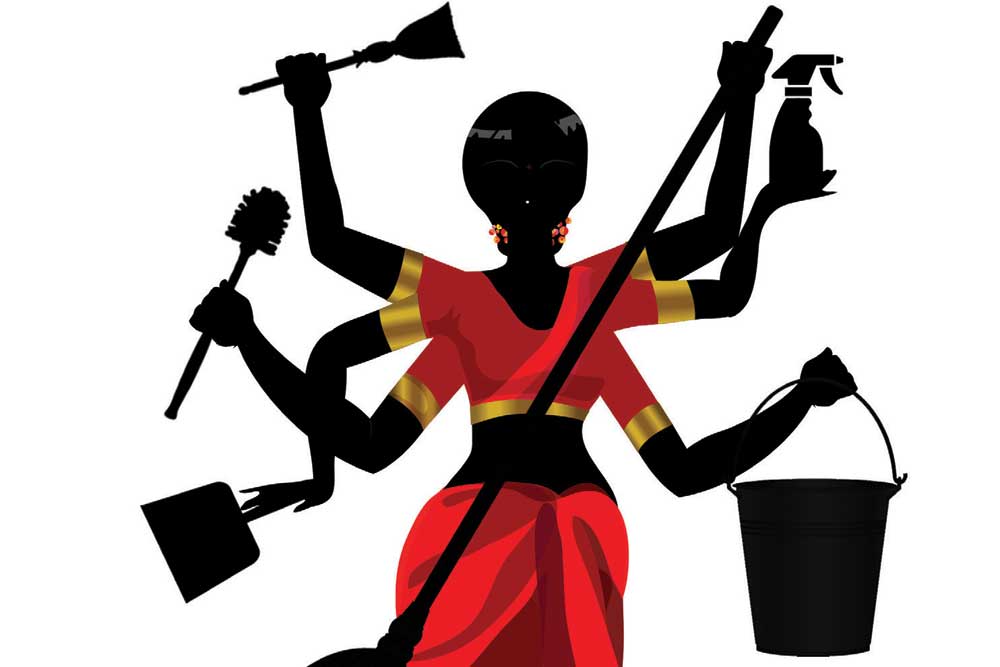 DIVIDING MY LIFE between India and Norway is akin to moving between luxury and want. India may have the world’s largest number of poor while Norway has one of the highest standards of living. But when it comes to the luxury of time, even the relatively poor Indians have more at their disposal than the country where everyone is theoretically a millionaire. Time famine is a leading source of ill health and relationship meltdowns in the West but an army of helpers, child minders, cooks, cleaners, gardeners, guards, sweepers and drivers ensure India’s urban dwellers enjoy a life free of tedium that Norwegians can only dream of. This human underclass— how else does one describe those who routinely earn less than the minimum daily wage with no benefits?—no longer exists in the West. So my months in India are both a boon and a bane: the boon of someone cleaning and cooking for me and the sharp feeling of guilt when I buy a bottle of perfume equal to that someone’s monthly salary.

It’s a huge development issue that challenges the basic tenets of constitutional equality but gets little play in public discourse. So it was with hopeful curiosity that I picked up award- winning journalist Tripti Lahiri’s debut book Maid in India, looking for a serious investigation into the lives of thousands of poor, illiterate migrant women who flock to the homes of better off Indians every year. I was not disappointed. The book works on the complex intersection where money meets poverty in our homes and describes a silent crisis that is attaining critical mass as the number of servants has more than doubled in the decades after liberalisation in 1991. As millions of families moved into the upper ranks, a plethora of jobs for unskilled domestic workers opened up in their homes, providing a new pathway from rural poverty of the least developed states. According to the National Survey of 2010, two-thirds of the 4.2 million domestic workers employed by families are women, yet there is no legislation to protect these vulnerable workers, no unions and little employer accountability when it comes to hiring and firing them.

Using Delhi, which enjoys the highest per capita income and is home to the country’s most powerful, as her stomping ground, Lahiri focuses on, ‘These girls and women—freed from the families they have left behind yet restricted by the homes in which they reside as servants, at once powerless because of their age, gender, language and ethnicity and also powerful as the fulcrum on which an entire village family’s hope rest.’ We meet a number of everyday heroines who transfer their salaries to build homes for destitute parents, educate their siblings and bail out needy relatives. We meet the agents who recruit them, both shadowy and professional who are fighting for better rates and working conditions. In a country where the birth of a daughter is still greeted with dismay, the stories of these women who traverse their meagre backgrounds to make a living among affluent Westernised strangers is heroic and highlights another development truth: when a woman earns, the family benefits more.

Lahiri, who made her mark reporting on the poor judicial response to crimes against women in India for the Wall Street Journal, turns her penetrating gaze on the lives of several maids in this book by visiting their villages in West Bengal, Assam and Chhattisgarh, sitting in courtrooms where the worst cases of abuse are aired and calling on homes across class and caste barriers in the capital to bring us a complex and troubling account of those who serve and those they serve.

We meet a number of unsung, everyday heroines who transfer their salaries to build homes for destitute parents, educate their siblings and bail out needy relatives

She joins the Kant brothers in a raid to rescue a maid in captivity and meets NGOs who secure justice for abused women. There are employers who have educated the children of their servants, but there are many more who haven’t paid their maids for long periods and keep them in sub-human living conditions away from their families for years. In the worst cases, there are maids who have simply disappeared without a trace. Their families don’t know where they were working and they don’t have the money to search for them. There were many such anguished families until 2002 when a young city lawyer, Aparna Bhatt, filed a habeas corpus in the case of a maid called Jharna, eventually leading to a larger investigation. In 2007, some 150 families approached a West Bengal non-profit seeking help to find missing wives, sisters, sons and daughters taken by placement agents. In 2014, the Delhi government finally issued rules for the city’s maid brokers but these have yet to become the law. Nevertheless, stories of rescues of maids who had been trafficked and abducted and children toiling in servitude began to appear through the work of organisations like Bachpan Bachao Andolan headed by Nobel laureate Kailash Satyarthi.

‘I thought I believed in the fundamental equality of people…’ writes Lahiri, ‘but…I had often treated the first maid I hired in Delhi as if she was entitled to less from her work than I from mine.’

Lahiri forces us, with uncompromising candour, to examine our own treatment of those who serve us: ‘We eat first, they later; we live in the front, they in the back; we sit on chairs, they on the floor… we call them by their names and they address us by titles: sir/madam, sahib/memsahib.’ True, all employers are not the same and we meet a few generous ones who have helped their maids’ families rise out of poverty. However, a good number of them are expats. Being married to a Norwegian who comes from one of the most socially equal societies, I have unlearned childhood attitudes over the years in appreciating my help, but I have friends who feel uncomfortable when she uses the guest room and sits across the table from me, discussing her daughter’s progress at the English-medium school she attends. The truth is, the most sophisticated, travelled, egalitarian friends practice a sort of untouchability in their homes when it comes to servants— with whom they also, ironically, share intimate moments on a regular basis.

Unlike romantic Hollywood movies like Maid in Manhattan, which are remakes of the old Cinderella fable, the maids in this book don’t end up wedded to tycoon employers. There is a chapter on affairs between servants and employers with no names mentioned, although this writer knows of at least one case where a millionaire’s wife bedded the chauffeur, causing much titillation a la Lady Chatterley in social circles. Sadly, the more common occurrence is one of sexual exploitation. Lahiri details a prominent case where a maid claimed her employer raped her, but the case fell in court because the law enforcement officers were bought off and provided false evidence.

Modern India’s attitude towards servants is tainted by the long shadow of caste inferiority and the arrogance of privilege, particularly among the new middle-class—people who, in many cases, have themselves climbed out of poverty in the last 30 years. In a telling passage, Lahiri makes us realise how much the economic distance is between the 1 per cent of Indians who earn Rs 1 lakh a month and the remaining 99 per cent. I remember once complaining about a missing pair of earrings which I suspected my maid of taking and my father’s response to my plaint: “It’s economic justice,” he said. It’s ironic that we women complain men don’t value our housework but deem the contributions of our maids worth so little in turn.

There have always been servants in India reaching an acme during the British Raj when families had large retinues of retainers—up to a hundred for a family of four in one case cited in the book. What’s changed is the upward mobility of those who have no concept of lese majeste which, in turn, lowers the bar for all servants. Of course, there is the economics of demand and supply and with millions living in poverty with meagre investments in human development, there will be a steady supply of servants. Or will there? Anecdotal stories of difficulty in finding maids are increasing as are stories of maids who have moved to work as sales girls in malls, in beauty salons and as waitresses.

Far from sounding righteous and judgemental, Lahiri makes an honest effort to explore attitudes and conditions through excellent, original reporting that goes beyond what one reads in newspapers to fill the gaps in the story. It’s an insightful social study of an aspect of our lives that needs serious examining.