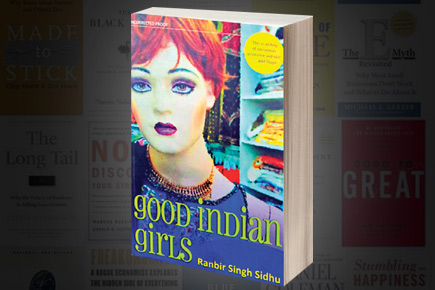 
‘Bodies motion sound’, one of the short stories of Good Indian Girls, begins with the narrator describing her family as afflicted with the curse of ‘uncontrollable emissions’. Her father is a pisser, her grandfather a perspirer and she herself a vomiter. In her ancestry, there are also women whose ‘menstrual fluids filled oil drums every month’ and someone ‘whose snot one bright morning remained perched at the end of her nose like a massive and growing fruit, each day enlarging, developing, gaining character and weight, until she could no longer hold her head up and sat with this rock of hardened mucus in her lap until it finally released itself, rolled off her thigh and along and down the hall, rattling doors and windows, scaring animals, scuttling the servants from its path, crashing out through the doors of her zenana and into the world…’ The description goes on and you find yourself wincing, not really from distaste, but the fatigue of magic realism. It used to be interesting once upon a time, tolerable later, but now all you can do is shrug at the laziness of it.

So you give up on this story, and then, Ranbir Singh Sidhu surprises you by pulling some rabbits out his writerly bag. In ‘Bodies Motion Sound’, it is when the girl, who has lived with terror stories of Idi Amin since her family fled from Uganda, gets his phone number and then calls for an interaction with him. It’s unexpected and almost casually, the story suddenly changes gears to move into another plane.

Good Indian Girls is a perplexing collection. There are so many clichés in style and substance that you keep setting your reading standards lower, but then, again and again unexpectedly, you are face to face with an extraordinary ambition. Sidhu is a gifted writer, never letting his characters or stories pause. To illustrate how he can be both pedestrian and spectacular, there is a story called ‘Neanderthal Tongues’, which begins with an anthropologist suspended in space after his death—a clichéd literary trick. But Sidhu sets this suspension in the Great Rift Valley of Ethiopia where the earth itself cleaves apart. And throughout the story, he conjures an intriguing variety of themes. There is the man’s father dealing with the trauma of Partition by seeking to erase the divide of language with an obsession with Esperanto. Towards his end, when he finally realises that the idea of one language for the world has failed, he sets about learning all the languages of the world. Then there is a Neanderthal skull that the anthropologist gets obsessed with as he tries to understand the human tongue before language was born. There is also the last scream of a murdered student which, to him, is an explosion of a primal sound. Everything is intertwined as the dead man collects it all in the space above the earth’s fissure. It is a grand design, even if all the strands in it seem so generic.

Sidhu doesn’t always succeed. ‘Border Song’ is about a woman who sings her way out of the memories of Partition. And when you wince at the magic realism here, it is a wince well deserved. As against the more intricate plots, this is a story with a single thread with nothing to redeem it. The story ‘Good Indian Girls’ has a passing reference to a serial killer, and, as expected, the central character, searching for an escape from emptiness, has a run-in with him. As a paean to loneliness, it appears contrived. In the book’s first story, ‘The Good Poet of Africa’, an Indian diplomat in Africa is mysteriously posted to the consulate in San Francisco. He is a poet and soon realises that he is not expected to work. All that the Consul wants is to give him space to write poetry. It should have been a welcome posting, but he rebels against it. He finds out that the reason for his posting was that someone had been sending poems to the Consul, labelling it as his. It’s a clever story. But then comes the jarring sub-plot of a woman called Double Love with a father who thinks he is the Seventh Avatar of Atatatata. You have run into such exaggerated characters often, and worse, it’s not really funny (if that’s the intention).

It is important for an author to know where he is breaking ground and where he is walking on well-laid roads. Sidhu will at some point, but this is not that body of work.