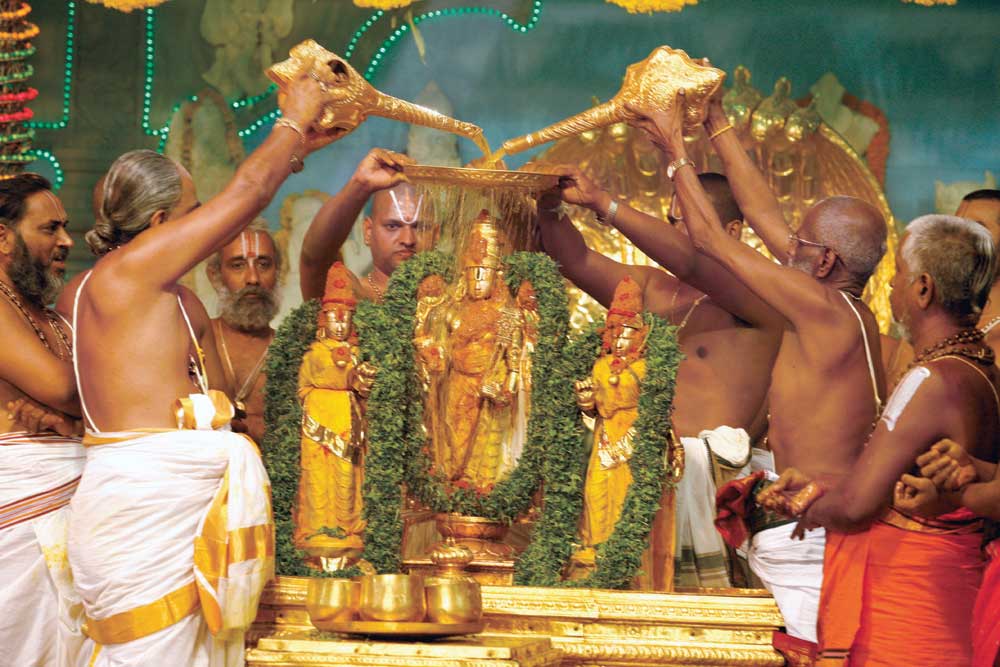 DOES GOD CONSUME food? This is the question posed by Av Ramana Dikshitulu and Kota Neelima in Tirumala: Sacred Foods of God. The answer is that Lord Venkateshwara, a manifestation of Lord Vishnu in Tirupati, certainly enjoys having at least three multiple course meals a day, and a few snacks in between. Since Av Ramana Dikshitulu is the hereditary head priest, the Archaka of Tirumala, and while awakening the God (suprabhatam), he utters a mysterious collection of shlokas (hymns) to invite Lord Vishnu onto himself so that he will become Vishnu, he, one supposes, should know something about the God’s habits. This is because only Vishnu is eligible to worship Vishnu, say the authors.

A molecular biologist by training ‘working to unravel the mysteries of enzyme functions in all life forms’, Av Ramana Dikshitulu has co-authored the book with Kota Neelima, a political journalist. Not surprising then that we get a glimpse of the myths surrounding the Lord in Tirumala. For instance, the nine- and-a-half foot idol of the Lord, it seems, is made of a material that is not found on earth. The Archaka, being the only one allowed to touch the idol, can ‘experience a very deep resonance of energy in the idol’. Another myth is that about 170 million years ago, Lord Vishnu took a physical form of a human being because it was the only familiar shape mankind could appreciate.

The first chapter gives us perspectives on prasadam. After the celestial bath and after conducting the durbar, the ritual offering of food is made to the God. Bhojyasanam is conducted through naivedyam, the food offering to God, which the authors point out, is not merely the surrender of a particular moment or food but involves surrendering the entire lifetime to God. The chapter highlights the strict rules surrounding the food’s preparation, ingredients, properties, proportion (depends on size of idol) location of the kitchen (south or south east corner), vessels (gold, silver, copper or earthen pot), water (from a river, lake or well), and so on. Fuel for the fire is from a mango or a palash tree. Before the food is offered to the gods, the cook should not smell or taste it, and outsiders should not see the food. Cooks have to cover their noses and mouths with a cloth while preparing the food. To achieve the same tastiness day after day without being able to taste or smell the food, I think, speaks of the high skills of these cooks.

The book’s uniqueness is in revealing what goes on at a time when devotees are barred from seeing or entering the sanctum sacrum. For instance, we learn what goes on when the God is having a meal. Generally in temples, the door to the sanctum sanctorum is closed at that time. We learn that water mixed with prescribed herbs is offered between each bite.

The chapter on the traditions of prasadams focuses on the 1,060 inscriptions etched on the rock walls of the temple, of which 200 date back to 800-1500 CE. It seems that corruption was rampant in those times too. Epigraph No 20TT from the Chola period has an inscription that points out that the royal officer in charge of the region had discovered that only two of the 24 lamps were lit in the temple. He therefore transferred the duty to the people directly managing the temple.

A third part of the book dealing with the recipes includes the preparation and the schedule of the offerings. Offerings are made of rice, jaggery or sugar, salt, and uncooked items. Here is the schedule and menu. Lord Vishnu partakes of breakfast from 6-6.30 am. It consists of pongal, tamarind rice, curd rice, jaggery rice, kadambam and rava kesari. Lunch is from 10 am-11 am, and dinner from 7-8 pm. To keep the divinity happy, there is a midnight offering of warm milk and dry fruits fried in ghee, accompanied by seasonal fruits cut into small pieces. Besides these, snacks like laddu, vada, and appam are also offered. The food commandments are: sacred food should not smell of smoke, should not be burnt, overcooked, or cold.

Dosai and a few other specialties are offered at dinner. That surprised me because if purity is the key governing principle in determining the appropriateness of an offering, then dosai would be a polluting food; dosai and idli (except in Kanchipuram) are rarely offered in the temples of south India. They are made with parboiled rice, which means that the rice has been treated with water, and through water, acquires the degree of purity of the person handling it. Parboiled rice bought in shops becomes something that is of questionable purity. But its greatest defect is that the flour has to ferment for at least eight hours before being made into the batter for the dosai. This makes it tamasic food, and out of bounds for gods. I learnt about this aspect from reading indologist Gabriella Eichinger Ferro-Luzzi’s article on why certain foods are offered to the Gods. I checked the recipe in Sacred Foods of Gods to see if fermentation is allowed to occur. The recipe does not call for parboiled rice, and that’s how they avoid pollution. It states that the rice and gram dal are soaked for a few hours and ground into a thick paste with salt. Black pepper, cumin seeds, fenugreek seeds and dry ginger are added to the mixture, followed by asafoetida. The thick flour paste is spread like a pancake on heated pans with ghee.

Some other details and comparisons would have enhanced the attractiveness of the book. A section on the contrast between Lord Vishnu’s diet in Tirupati and the offerings in other parts of India could have given us a better sense of why different foods are offered to the same Gods in different geographies. In Kerala, no salty food is offered to the Gods, while that principle does not hold for Tirupati. One would also liked to have read a little more about the sorts of food offerings in the past, and what caused the changes. For instance, Ferro- Luzzi points out that some foods like tamarind rice have entered the offerings to the Gods because of their preservability. In summer, boiled rice becomes stale and thus impure within a few hours. Boiled rice with lime or tamarind or pepper and oil has the property of being fresh longer.

These are but minor quibbles. Sacred Foods of God is a highly readable book, containing interesting nuggets and philosophical reflections that stay with you. The book has been produced in a handsome fashion with a large typeface and glossy photographs to relieve the eye and lighten the text. Its major selling point is that we get a sense of the rhythm of Lord Venkateshwara’s day. Definitely shelf-worthy.