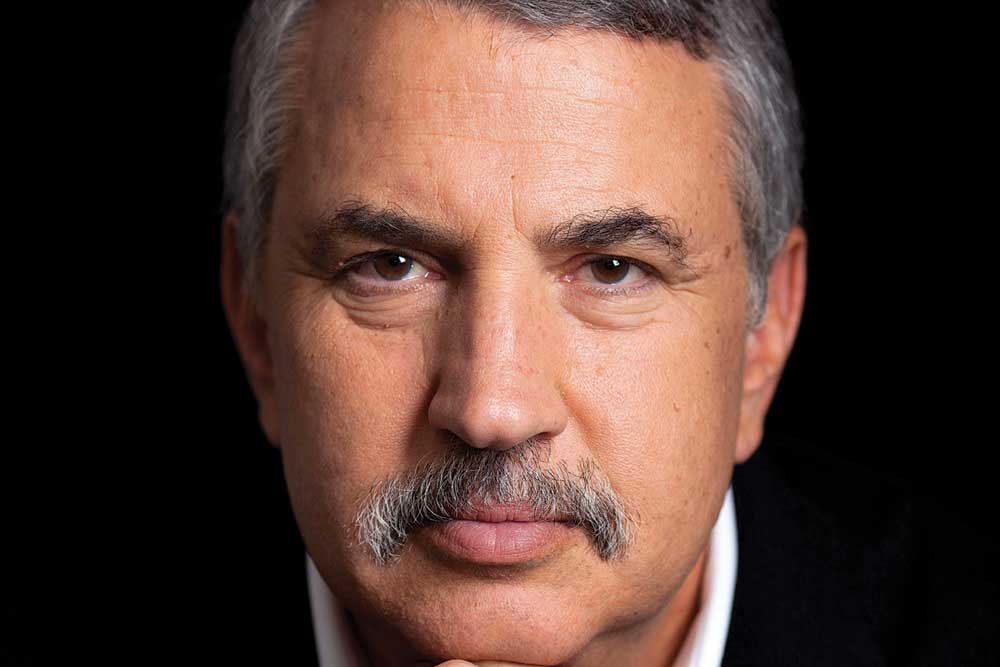 WAY BACK IN the early 1990s, my one-time boss Saleem Muqaddam presented me with a copy of Tom Friedman’s From Beirut to Jerusalem. Saleem knew that I was interested in the Middle East and he thought that this book had an interesting take. Which of course it did. I learnt a new expression , ‘Hama rules’, which described the kind of warfare that could and did take place in that unhappy part of the world. Watching the bombings in Sanaa and Aleppo on TV today, one can’t help but think about how prophetic—and sadly, tragically prophetic Friedman was. Years later, I met Friedman in Bangalore when he interviewed me and went on to quote me in his The World is Flat, giving me a Warhol moment of fame among friends and acquaintances. Since then I have met Friedman off and on—although sadly not so much in recent years. Reading this book in his intimate conversational style, I felt that he was actually talking to me. Consciously or unconsciously, Friedman remains one of the best students and imitators of Tocqueville who reportedly ensured that his style remained direct and comprehensible by getting his writing read not by experts, but by family members. It is not unlikely that in a hundred years, Friedman will be quoted as often as Tocqueville is today.

Friedman’s basic interest is history: as it is being made, not as it is recorded in mildewed archives. A journalist by profession, he gets to meet and interview actors, analysts, commentators who talk about today in a snapshot frame and today-tomorrow-the day after in a series of video frames. He has a special ability to explain technology and technological change: both the applications which we see in the front-end and how the technology is put together in the proverbial back-end. He then proceeds to explain the implications of what is happening and what is almost certain to happen to us as individuals: as workers, as consumers and above all as parents. He touches a chord in each of us when he speculates as to what is in store for our children. Should we advise them to become lawyers or should we be honest with them and tell them that they have entered a world where the quantum and the speed of change is so huge and so complex that the safest rule might be to ignore parents altogether? In The World is Flat, he put the fear of God into parents and into young people by showing them that cosy certainties simply will not work going forward. Several American friends of mine who read that book got quite worried about the prospect of enduring unemployment for their children.

In his latest book, Thank You For Being Late, Friedman continues from where he left off with The World is Flat. The febrile and frenetic nature of technological change that we are witnessing is best captured by the fact that Friedman sees 2007—two years after the publication of his earlier work—as an extremely significant year that marked major discontinuities and inflections. Friedman makes the case that we have to now start getting accustomed to the fact that fundamental technological changes that dramatically change the lives of human beings (for example, Gutenberg’s printing press) now happen virtually every ten years. ‘The world’s biggest gears and pulleys change in radical ways and the Machine, with a capital M that represents the world around us changes— and in so doing the opportunities and the risks for humankind get altered.’

Friedman is a self-confessed optimist. As he describes the extensions of Moore’s law into areas far removed from semi-conductors, as he rhapsodises about the Internet-of-Things, as he explains the mysterious cloud in the computing world in simple English, as he talks about the acceleration of the rate of change of velocity when it comes to previously complex and expensive technologies—he emerges as a brilliant observer, analyst and historian of our times. Intimate computing technology (not stuff that is distant from us) can now handle breathtaking complexity, can constantly get better on its own and can overturn traditional meanings of productivity and human agency. This of course opens up opportunities in unexpected places. A data analytics start-up in remote war-torn Kurdistan which is growing by leaps and bounds demonstrates how these new technologies help create jobs everywhere.

But not all is hunky dory in the state of Denmark. There are things which if not already rotten, could easily become so. Friedman is concerned with the fact that the social and political changes required in order to deal with the technological changes, which have an inexorable characteristic, are neither inevitable, nor in fact happening as they should be. This leads to a dysfunctional situation. Human alienation, fears of unemployment and unemployability (both of which are very real justified fears), irrational responses (raising walls, indulging in medieval violence) and the fact that the risks associated with change (as distinct from the opportunities we tend to talk about) might threaten human civilisation itself—this is the theme of the second half of his book. Climate change is a matter of serious concern for him. I have not come across a better explanation of how droughts and high fertility are partially but significantly behind the massive northward migrations from Central Africa, the Middle East and Central America. Even if you are a climate change sceptic, the fact that droughts and desertification are hugely additive to Islamist extremism or failed states in the propulsion of large voluntary, hazardous migrations is a point that we need to acknowledge.

WHAT THEN IS the solution, assuming there is one? Technological change, inter-connectedness, empowerment, high productivity gains, massive integration of global markets— one can go into fits of ecstasy contemplating all of this. But as human beings, if we are unable, unwilling and in the final analysis so paralysed that instead of leveraging technology, we let it destroy us, then would it have been worth it after all, after the evenings and afternoons measured out with coffee spoons? Friedman falls back on his youthful memories of Minnesota, which in the balmy 50s and 60s managed to combine economic growth with the sensible provision of public goods and with social progress, as witnessed by the decline in anti-Semitism. He draws attention to the contemporary Itasca project in Minnesota which is an attempt at pragmatic public-private partnership with special focus on avoiding political polarisation (sometimes promoted by ubiquitous new technologies like social media), returning to a human person-to-person direct interface and working really hard to create an ecosystem where individuals, particularly young individuals, can skill themselves in ways that help them treat the changed technological paradigms as a path for growth and progress and not as a one-way street for alienation and unemployment.

Friedman is optimistic that the Minnesota experiment can and should be imitated in different variants across cities and communities (he has very little faith in federal/central governments trapped in a traffic gridlock) not because he has proof—but because he believes that there is no alternative but to be optimistic. It has to work if civilisation has to survive and actually benefit from the marvellous technologies that we now have access to. With due respect, I think I have to differ. Friedman’s fascination with Michael J Sandel, an impractical and shallow Harvard academic, leads him down a path of nostalgia for a Minnesota which probably never was. (In fairness, Friedman acknowledges the exclusions and the excluded in golden Minnesota). While the opportunities that human technical wizardry give us today are immense, my own take is that human civilisation is right now very fragile and under assault. History has not been a straight line. Rome was sacked and the Great Wall of China was breached by barbarians. The idea that such things cannot happen again and that we must remain optimistic because we have no choice is emotionally appealing but intellectually not coherent enough.

Friedman makes a strong case for the excitement and the promise of the digital technologies we have access to. When he writes about this, he is enchanting. He also points out with candour and clarity the social, political and environmental risks that we face. It is the optimistic denouement that left me unconvinced. But the book is a must-read, and I sincerely hope that while all will find it illuminating and exciting, some also derive unalloyed optimism. Happy reading.