Friends of My Youth 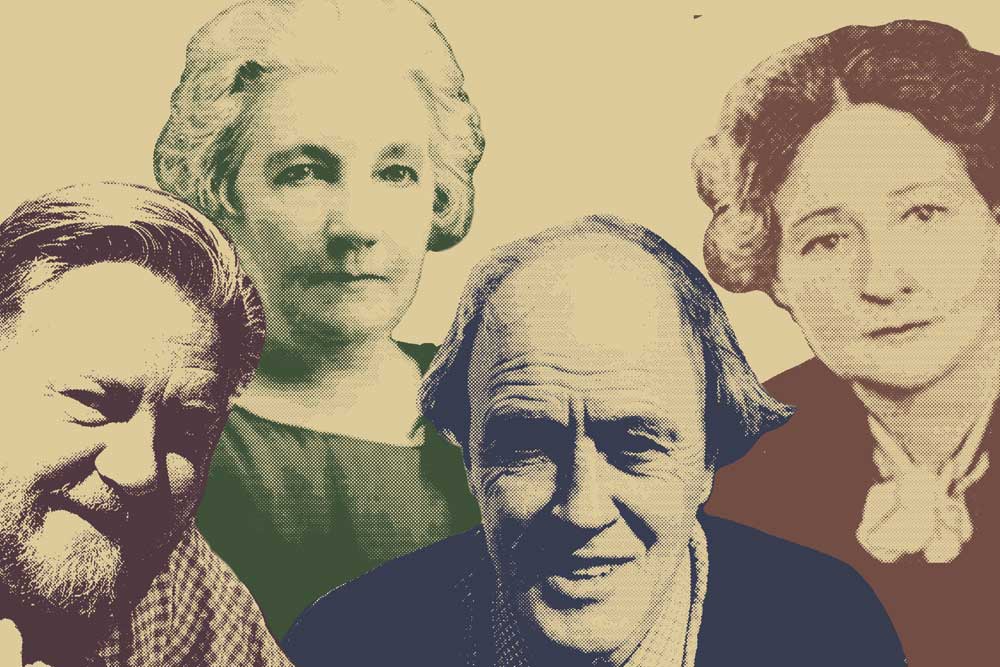 I HAD SOME PRETTY famous friends growing up. They didn’t live near me, nor did they know my name. Some of them weren’t even alive, but I knew them intimately: Laura, Roald, Gerald, Olga and later, Kathryn.

I knew, for example, that Gerald barely spoke. Any interest he had was in animals. I thought of the two of us wandering down a Corfu countryside, him explaining the spiders and the birds to me, I holding on to a collecting jar. I knew Laura was trying to be a good girl but inside, she was as rebellious as I’d ever felt, that her white hot rage was similar to mine, tamped down by her mother, who was trying to turn her into a well-bred woman. If Olga and I ever hung out, I’d be sure to not be afraid of her tiger cub, and romp with her wolves and pet the foxes.

I was at a dinner party in Goa when I met the host’s distant relatives. They came from Minnesota, and I turned that name around in my head until I remembered why I knew it. “Isn’t that where Laura Ingalls Wilder is from?” I asked and instantly, the conversation, which had been stilted so far, erupted. “Yes!” exclaimed one of the Minnesoteans, thrilled that I knew of the author. It felt like a bond had been established between us, her, and me, and the ghost of Laura Ingalls Wilder, that little girl who once lived in a little house on the prairie.

Memoirs, especially memoirs for children about children, written by the authors themselves, have always been popular. Think of Roald Dahl’s Boy. It is a bloody, gruesome bit of work, full of descriptions of beatings and doctors who attack you with a knife, and in one particularly memorable passage: Dahl’s nose gets sliced off in a car accident and it’s hanging on to his face by a thread of skin. I could read it a hundred times and still get chills about that nose, his mother grimly holding it on, the children sitting on broken glass as they drove to the doctor. His narrative in Boy appeals to young readers particularly for its love of gore and detail: what other children’s book would tell us about a master in school who dismissed class as soon as someone farted? Or about the time the matron popped soap shavings into the mouth of a snoring boy?

The other memoirs are less macabre, but no less satisfying. For some reason, My Family and Other Animals was the book everyone in my generation had read, the description of Gerald Durrell’s life and family on the Greek island of Corfu being something we, Indian children, separated by oceans and decades, could relate to. I don’t know what everyone else took away from the book, but for me, the most vivid passages are the ones about Larry (Lawrence Durrell, a famous author, and Gerald’s oldest brother). Larry swore and he drank, he was as irascible as Leslie (the middle brother), was obsessed with guns, and Margo (the sister) was always coming up with a new malapropism. The Durrells were unlike any other family I’d ever met, but the most freeing thing was that Gerald, at 10, was allowed to do as he pleased, to run around in pursuit of animals all day if he wished, with only a few tutors hired along the way to give him an education. Perhaps it’s that idyllic life we all wished for, caught up as we were in the CBSE system, going to school every day under kilos of heavy textbooks till our backs ached and our eyes tired from rote learning. How could anyone not envy Gerald, even the least animal- friendly people I knew wanted to be him, just for one moment, treated as an adult and allowed his own whims and fancies.

While the male writers’ were all about free lives, the women writers wrote of more familiar things

While the male writer’s memoirs were all about free lives (Dahl’s to a lesser extent, but he too was allowed to do as he pleased when he was on holiday), the women writers wrote of more familiar things. The Little House series by Laura Ingalls Wilder is the story of a girl named Laura who lives with her pioneering family in North America. Based loosely on Wilder’s own life, the story stretches from Laura and her family in Wisconsin, all the way to the first four years of her marriage. Through it all, in loving detail, is the story of what they wore and what they ate, and the presents they got. Ordinary things, but made alive by the sparse, descriptive prose. As children, Laura and her sister Mary witness the butchering of the pig and are given the pig’s bladder to play with, which they blow up into a balloon and toss back and forth. Later, Laura eggs the town ‘mean girl’ to play in a creek full of leeches, she laughs and points as the child emerges, weeping. Mary goes blind with fever and is sent off to a blind school, Laura takes up a job as a school teacher and has to board with a family stuck in an unhappy marriage. Later still, she finds love with a man several years her senior, Alamanzo Wilder, and marries him quietly, but not before she objects to using the word ‘obey’ in her marriage vows.

But there were darker stories lurking underneath. Take Olga Perovskaya’s Kids and Cubs. It was part of the surge of Soviet literature being published in India in the 80s and 90s and talks about Perovskaya’s early life in Kazakhstan, where her father frequently brought back baby animals when he was hunting. Lucky Perovskaya and her siblings had a tiger, wolves, donkeys, foxes and a stag, all of which were treated like pets until they grew into the wild animals they were. Most died at the end, a sad finale for a children’s book, but treated with matter-of-factness. It was only later, reading Nilanjana Roy’s memoir The Girl Who Ate Books that I discovered that Perovskaya herself was sent to a Russian labour camp in 1943, and released 10 years later. It puts a sad epilogue to the end of the book. Wilder, too, painted a rosier picture in her books; in real life, her father, the charming ‘Pa’ was a bit shiftless, she left out a whole year of unhappiness in the book series and doesn’t even mention the death of a little brother, aged nine months, nor her various miscarriages. Durrell was an alcoholic, a trait inherited from his mother, and Dahl was an anti-Semitic.

Mothers. They rule strong in the memoirs, and no more so than the mother in Kathryn Forbes’ slightly fictionalised version of her Norwegian- American childhood in Mama’s Bank Account. The ‘Mama’ in the book is a slight, strong woman, who will do anything for her family. Similar to all the other mothers. Dahl’s mother kept her family together even after she was a pregnant widow, and managed to send him off to be educated at the best British schools. Durrell’s mother kept a benevolent but lax eye on him as he cavorted around Corfu. Wilder’s mother is not remembered with as much love as she remembers her father, but while Pa is full of ideas and schemes, it is Ma who holds her daughters to the standards she believes acceptable, it is Ma who makes sure they are fed and clean and educated. Even Perovskaya’s mother, who again, is not as well described as the dashing forester father, is the one who teaches them how to feed the baby animals, the one who stays at home and watches over her daughter as they play with dangerous creatures. They rule strong in this version of their lives, perhaps because they are the rulers of the child’s small world.

The best way to know an author is to know them in their childhood. I still think that’s true.