Ruskin Bond and the magic of childhood 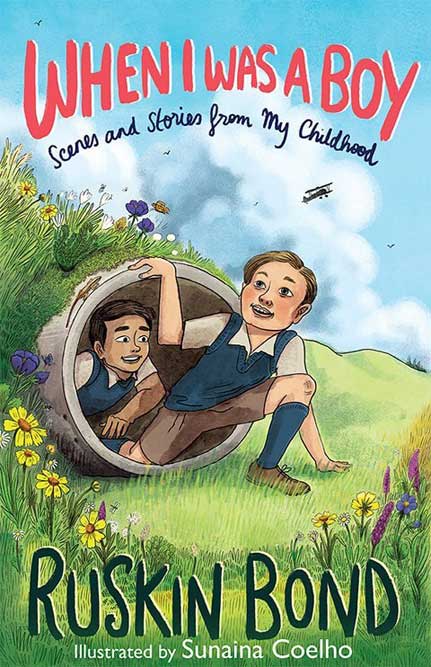 In his recent novel, When I was a Boy: Scenes and Stories from my Childhood, the beloved author, Ruskin Bond, adheres to his traditional autobiographical writing style as he divulges the secrets of how he developed his acclaimed storytelling technique; recounts his early days in the petit city of Jamnagar; and ruminates over his special moments with his Ayah, daddy, and copious friends made along the way.

As the story progresses, the reader is swept away to an unseen, dreamy, and almost-magical time of British India, where the tales of long tunnels, tiger moths, and gramophones come alive through rhythmic writing. Bond lures the reader into a kaleidoscopic world, as he writes, ‘In the album, the pictures are browned with age. In my mind, I see them through many-colored glasses, sometimes green and sometimes red.’  His simple diction and syllabic tone are a delight for a reader, of any age.

The plot too follows a chronological approach, exploring the various stages of Bond’s life—from when he was a few months to 21 years old. He is his Ayah’s or nanny’s ladla (sweetheart) who teaches her how to waltz, but he is also a lost, lonely child, with shattered hopes and a father lost to the war. With age he grows more independent, eventually evolving into a man with a room and few writings to his own name. The reader then sees him waving good-bye to his near-and-dear ones as he embarks on a journey to England.

However, among all the roles he has donned in this memoir, one recurring role is that of a friend. Bond portrays himself as one who is amiable to all—Miss Kellner, a lady in her late sixties; Crazy, his family dog; the princesses of Jam Sahib, who he first believed were boys; and Azhar, his longtime Muslim friend and a boy who was taken away during the Partition. His role as a friend is bittersweet at it’s core, some of his friends are lost to time, some to politics, and yet they seem as fresh as yesterday in his memories for he writes, ‘some friends—their eyes, their touch, their words—cannot be erased from our memory.’

Bond embeds similar words of wisdom for his young readers throughout the text. For instance, in a chapter titled, ‘The Tunnel of Friendship,’ he describes Bimal Mirchandani, the boy with the skinniest legs from his boarding school who was tagged ‘Bambi’, as one who later went on to become a good wrestler. He writes, ‘how wrong we are to judge people only by their appearance,’ and it is when morals are taught through such humble and humorous stories that children are truly bound to remember them.

However, apart from children, Bond also gives adult readers an opportunity to reflect upon their deeds, as he compares and contrasts his present days to those of his childhood. He writes, ‘It is strange that now music comes from mobile phones and everyone everywhere is walking around with little earplugs that pump the sound right into their ears,’ comparing his present to the days of the gramophone, pushing older readers to mull over their own childhood and present.

Overall, When I was a Boy is a unique Entwicklungsroman in its essence, dealing with the development of the protagonist from childhood to maturity with great eloquence. Bond nostalgically describes a feeling, a thought, a concept The Magic of Childhood, which we so often forget to reminisce in the hustle-bustle of our daily lives, and his concluding statement is a blessing to us all, ‘My dear, gentle reader, may you also remain forever young.’