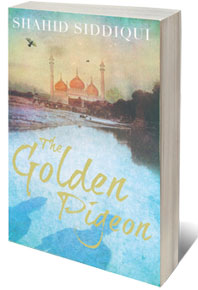 The Golden Pigeon is an odd book. The first half seems to be the memoir of an old and aristocratic family from Shahjahanabad (Old Delhi, to you and me), and is littered with jinns and other wonderful ruptures in the natural order of things. The second half changes tone and pace and style almost entirely, and reads more like a conventional novel: of twins and lovers and family members separated by the blood-sodden borders of India and Pakistan. Both halves are interesting enough (though not compelling), but together, they are more bland khichdi than nihari, that redolent, slow-cooked, subtly spiced dish the book mentions every so often.

The Golden Pigeon has a marvellous opening. In the still- uncertain years that immediately follow Partition, a Muslim woman, Hina, grabs one of her twin boys and flees from the railway station, where her husband is preparing to board a train for Pakistan with her other son. She returns to her mother’s house in the lanes of Chandni Chowk, never imagining that the borders of the new nations, separated at birth, would ossify, hardened by a mutual mistrust and suspicion that would eventually sunder even the composite cultures that they held within themselves. The trials, tribulations and triumphs of this separated family form the backbone of this ‘novel’, but the stories of the minor characters— Bundu the cartman who ends up breeding horses for the Queen of England or Dr James, the Englishman with Indian blood, for example— are actually more memorable, if only because of how improbable they are.

Through her mother, Hina is descended from the Mughals and much of what follows in the first half rambles between Mughal lore, local superstition and the obviously true story of a formerly grand family dislocated and dispossessed by history. Shiraz, the young child who stays in India with his mother, grows up in the variegated and colourful gullies around the Jama Masjid, aware that he is Muslim and that he and his lost twin somehow represent what has happened to their young nations. He flies kites, admires pigeons and spends time with his Hindu neighbours, though events from public history interrupt the private life of our protagonist; for example, India’s war with China prevents a reunion between Hina and her forcibly estranged husband and son. But the grand sweep of history that Siddiqui attempts to capture— through episodes such as these or through anecdotes about real people that he scatters through the book—fails because it has nowhere to drop anchor in the essentially shallow waters of this tale.

Time passes and Shiraz falls in love with a Hindu girl, Anu, a love that is shadowed not only by the growing rift between local Hindus and Muslims in Shahjahanabad but also by the murder of Anu’s uncle, for which young Shiraz is blamed. The boy must run and it is his grandmother’s relationship with the jinns that live around Humayun’s tomb and Sheikh Nizamuddin’s dargah which helps him get away to relative safety in Pakistan. Shiraz is able to be near his father and his brother and watch their lives, but he cannot communicate with them (for reasons that I cannot disclose without giving away the one soaring surprise that the book holds). A lot of back and forth between Pakistan and India, a few political homilies along the way, and the story shudders to a predictable halt with a mostly happy ending for those characters we have been persuaded to care about.

Perhaps of all Indian cities, it is Delhi’s siren song that seduces writers the most, bringing them to her with a thirst to tell her stories rather than their own. Siddiqui’s book joins that special genre as a pale shadow. The author biography in the book indicates that he comes from the kind of family he writes about, and there is a whiff of the authentic to his narrative assertions about the city and its people in the more fanciful first half of the book. Even the more unlikely characters and events in this part ring true, but as the story progresses, its curiously flat, uninflected language and detached air betray what could have been a much more engaging romp through history. In the end, this book has neither the bitter nostalgia of Ahmed Ali’s Twilight in Delhi nor the joyous excavations of Dalrymple’s City of Djinns, and certainly none of the audacity of Khushwant Singh’s Delhi. Siddiqui’s Pigeon simply does not stand a chance against the more majestic falcons that fly higher and stronger around it.