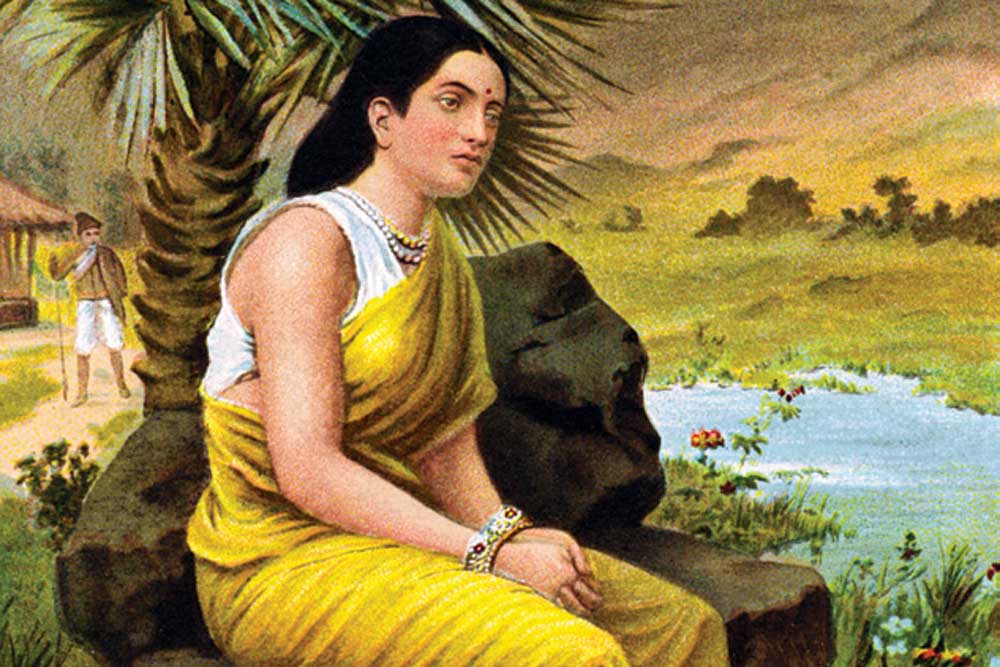 MY MOTHER WANTED to call me Sita when I was born. However, my maternal grandmother quickly intervened on my newborn behalf. “You can’t call a baby girl Sita,” she who had four daughters herself said, “It’s a bad luck name.” The idea of Sita’s life as an ill-fated one stayed with me, even though we’re so used to thinking of her as an ideal wife, an ideal woman. Where’s the bad luck? I realise now that my grandmother was perhaps making a subtle, subversive feminist statement by refusing to let me be called by that name; she, with a life of looking after her husband and children, perhaps wanted this new person to be free of the same fate.

This past year has been full of viragos, trying to bring balance to a flawed system, trying to get men to be accountable for their ways. And at the start of the new year, comes Chitra Banerjee Divakaruni’s long-awaited book The Forest of Enchantments , telling the Ramayana from the point of view of Sita, that long-suffering wife of Ram. Divakaruni’s previous foray into myth-lit was with The Palace of Illusions, retelling some of the Mahabharata through another long-suffering wife Draupadi’s eyes. Divakaruni wasn’t the first to attempt to change the way we look at ancient epics by just shifting focus, but it was a tremendous book, and it has stayed with me for so long that I’m surprised to find it is a decade old.

The Forest of Enchantments continues the excellent work Divakaruni did in The Palace of Illusions; it takes an ancient story and makes it so urgent, so present day, that you almost want things to change for Sita in the end, even though you know how the old story goes. To be able to get someone to care about a tale as old as time is a gift, and Divakaruni’s Sita tugs at heartstrings with her youth and naiveté at the books’ beginning. She is transformed from a young happy princess building bridges between her father and mother-in-law (his most neglected wife) to the loved-up honeymooner in the forest, the stoic prisoner in Lanka and finally, the woman who realises her husband will never cherish her as much as he cherishes duty.

Besides which Divakaruni does bring forward some of the more neglected female characters: there’s Sita’s sister Urmila the faithful, who takes on 14 years of sleep so her husband can stay awake in the forest, guarding his brother; there’s the much-maligned Kaikeyi, whose motivations are still unclear, but whose warrior queen attitude makes a nice change from just shrewish wife; and then there’s Shurpanakha. Perhaps second to only Sita in renown, Shurpanakha has seen all sorts of PR shifts. Women are now claiming this sexy sister as one of their own, an ancient woman with the courage to speak up for what she wanted and was silenced for it. Who amongst us cannot sympathise with her? I was, though, slightly disappointed with Divakaruni’s Shurpanakha —the character comes across in many shades of grey, yes, but always slightly remotely. First she’s a child-like woman who Sita encounters completely naked and thinks wistfully how freeing it would be to run around the forest starkers. Then Shurpanakha shows up dressed in a sari ‘like a peacock in mating season’ and the fateful nose cutting off incident happens. Shurpanakha is never quite human, she seems to exist solely as a deus ex machine to propel the plot forward, or to be the token villain.

I can tell you from personal experience that to fiddle with your mythological women a little bit, to make them bolder, brighter, braver than they were in the original epics, would mean anachronisms. Sita was faithful to Ram, that’s her whole modus operandi, so to change that would be changing the premise of the book. However, I did want to see more of what drew Sita to Ram in the first place. I saw Sita proclaim her love a lot, but never the whys and whats of her love. And he seemed like a difficult man to love, so piously bound to his ‘sense of duty as a ruler’.

Given the current ferment, the reader might wish that Sita had spoken up a bit more. In The Forest of Enchantments, she is true to the epic, but is that the Sita we need in the 21st century? There are hints at her martial arts training, at her skill with herbs, at her way with all growing things, but nothing that empowers her, ultimately. However, Sita does rebel by writing down her own version of her story, by finally having enough of her husband and his trials by fire, and choosing to exit the world on her own terms. It may not be what you and I would choose, but in the end, this is the story of a woman empowered.