The Marx Brothers were right. X’mas or not, there aint no ‘sanity clause’, not in book contracts. 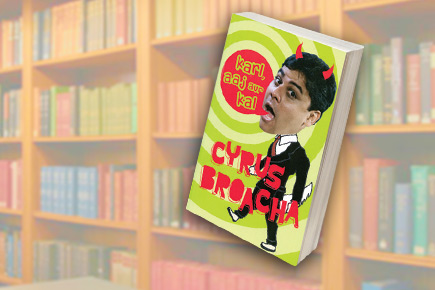 The Marx Brothers were right. X’mas or not, there aint no ‘sanity clause’, not in book contracts.


Novels that don’t know why they exist are a novelty in India. Most books are written with a purpose. They are written, even without a stuffed nose, for ffug’s sake—Fame, Fortune and Ultimately Glory. Cyrus Broacha’s debut novel is not. His Karl, Aaj Aur Kal, suspects one, couldn’t care less for any of that, which might mean it owes its origin to the French Art House Movement. Or else, a scandal in the shape of a stoned tryst with a laptop, a seductress which, under the hallucoviagric influence of baida-pav, can apparently perform such gee-wiz wonders as a ‘laplace transform’ without much of a song-n-dance: a lap is a lap is a lap, but ‘the lace lies within’, as they say.

One way or another, everyone must give in to the written word, so that’s okay. Grudge Cyrus not his space. Thus spake Paul Kriwaczek, actually, an author who has spent ages researching such stuff and still allegedly gets his millennia mixed up. Cyrus Broacha has spent ages babbling on TV and still unallegedly gets just about everything mixed up, which is what makes this aimless shameless novel so compelling.

Karl is the hero of this story, but a hero who’s never quite sure of his role. Or his father’s. Thus goes the first line: ‘Jehaan and Karl shared a fairly close father-son relationship, although their roles depended on their moods and were often reversed.’ Luckily, Karl becomes an actor, and the focus shifts to his buddy Kunal, who offers both girth and mirth; my eyes welled up laughing at their audition for a film by Paul Bruzinski in New York.

Karl’s love life is nuttier. It’s largely one of triple dates with a girl called Sophia, though nobody gets to jump anybody—or on trampolines—or obsess her/himself fluffy-shuffy with songs. Blame it on his one-time romance advisor, Iqbal, who thinks it’s a game of one-tip-one-hand cricket. (Don’t ask.) As for our hero, he hits success only after teaming up as a threesome a la Marx Brothers with a Bollywood superstar called Yusuf Khan, who insists on singing in his movies, excels in the art of putting flames to tongue, and is secretly something of a Zoo-Zoo with an elephant’s memory in disguise, but has the country raving about him all the same.

Jehaan, meanwhile, is too busy trying to enhance his allegro, his high notes, or some ffug-forsaken musical score or the other, to notice any of this. And Karl has no time or space to thank him for his role. It wasn’t egjhakly a role in a haystack, but what the heck… even he wouldn’t know why this book was written. Any guesses? Read it again.