When memory powers the pages of a good writer, time shrinks, and imagination makes the real starker and intimate. Martin Amis, yesterday’s enfant terrible and today’s elder statesman of English fiction, is not a sentimental writer. The best of him exudes the comedic exuberance of a writer whose every sentence is a showy declaration of craftsmanship, still emulated by fanboys. Inside Story (Jonathan Cape) is a novel in which Martin Amis plays the lead role, in the company of writers he admires and friends he has lost. The best passages are reserved for Saul Bellow and Christopher Hitchens. Maybe not. In the end, you realise that Inside Story is what the title suggests: Amis, from his Brooklyn town house, is looking in the mirror, and the shifting images of emotion are the pleasure of this novel, which should be read, as the novelist himself advises, leisurely, without the hurriedness of a reviewer. If Amis is mammoth, Don DeLillo’s The Silence (Scribner) is a chiselled aside, not more than 117 pages, from America’s greatest living novelist. Five chatty people—two of them just survived a plane crash—in a Manhattan drawing room on a Super Bowl day and the city—or the world?—undergoes a digital breakdown. It’s a meditation on technology and existential deep freeze, with Einstein hovering over. Science again makes DeLillo prophetic. In Zero K, his last novel, it was immortality and cryogenics. Now algorithms write Apocalypse (‘Black Noise’,Open, December 7th, 2020). In a year I read few novels—the other two notables were Red Pill (Knopf), which will warm the hearts of those who like novels as dissent, and Lionel Shriver’s The Motion of the Body Through Space (The Borough Press), which will quicken the pulse of ageing runners and other loners—what I’m reading just now is the time travel—and what a joy ride—we all need. The epigraph prepares you for Joaquim Maria Machado de Assis’ Posthumous Memoirs of BrásCubas (Liveright Publishing Corporation): ‘To the first worm to gnaw the cold flesh of my corpse I tenderly dedicate these posthumous memoirs.’ Originally published 140 years ago in Portuguese, and now translated into English by Margaret Jull Costa and Robin Patterson, this Brazilian classic may owe its subversive novelty to the original subversive, Laurence Sterne, but ‘this is, after all, the work of a dead man.’ I can’t resist quoting the first para: ‘For some time, I could not decide whether to begin this memoir at the beginning or at the end, that is, whether I should start with my birth or my death. Since the usual approach is to begin with one’s birth, two considerations led me to adopt a different method: firstly, I am not so much a writer who has died, as a dead man who has decided to write, and for whom the grave proved to be another cradle; the second is that this approach will make what I write more elegant and more modern…’ I have not yet reached the last page of Cubas’ autobiography, a sketchbook for future practitioners of magical realism.

Borges is a natural choice to begin my non-fiction list. In 1971, Jay Parini, an American student at St Andrews,was given the envious but unexpected assignment by his mentor: take the great Jorge Luis Borges around the Scottish Highlands. Borges and Me: An Encounter (Doubleday) is Quixotic in its own hilarious ways, with Parini playing an accidental Sancho. He has read nothing by Borges yet. In their adventure, the young Parini becomes the eyes of the blind genius, and, finally, sees his own true worth. This Borges, fuelled by local beer, you are unlikely to find in his stories or essays. Memories provide the rustle to the pages of A Remarkable Friendship (Macmillan), Yogi Vaid’s elegant portrait of his friendship with Aman Nath. Writer, hotelier, restorer, connoisseur, Aman Nath turns ruins into monumental rhapsodies, ideas of culturally sustainable habitation into rare aesthetic experiences. He echoes a great writer from another time: “Beauty shall save the world.” His good friend Vaid, a natural storyteller, has written a celebratory book worthy of its subject, with endorsements from others thrown in. And my political book of the year is Jugalbandi: The BJP before Modi (Viking) by perhaps the most original academic of his generation with a storyteller’s flair, Vinay Sitapati. Jugalbandi is the Indian Right’s one hundred years of rectitude. Apart from answering, with a historian’s authenticity, why BJP ticks, it personalises history with the parallel lives of Vajpayee and Advani. Rod Dreher’s Live Not by Lies: AManual for Christian Dissidents (Sentinel) has relevance beyond its primary premise of America. In the age of what Dreher calls ‘soft totalitarianism’, which is sustained by forces as varied as identity politics and techno-capitalism, freedom has to be a relentless struggle, not for American Christians alone.

If Martin Amis is mammoth, Don Delillo’s the silence is a chiselled aside, not more than 117 pages, from America’s greatest living novelist. Five chatty people—two of them just survived a plane crash—in a Manhattan drawing room and the city—or the world?—undergoes a
digital breakdown

POSTSCRIPT: Barack Obama’s A Promised Land (Viking) is the book I half loved. I loved the pre-presidential part of his first volume of memoirs (‘Dreams from Obama’, Open, November 30th, 2020). Those passages were unedited by power, and there I got a glimpse of the writer I first met in Dreams from My Father. 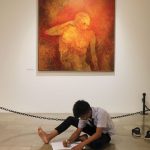