Comics gets serious in a collection of narrative essays 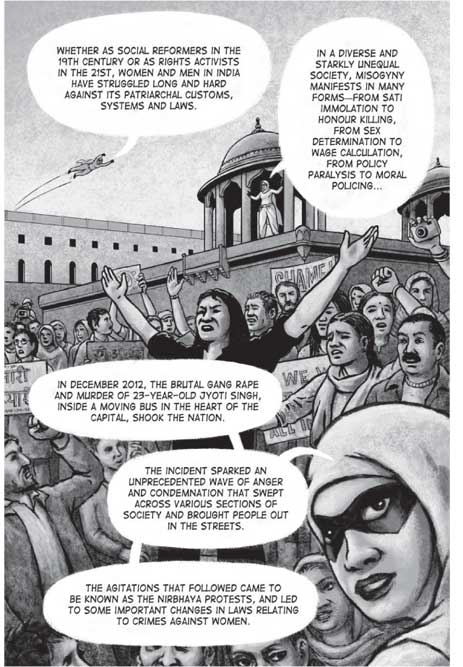 IN THE STARKLY drawn Ellipsis, Ikroop Sandhu recounts the legend of her great grandmother, who died one morning in her village in Punjab and then came back to life. She told the story of her journey to the ‘other side’ to her family. “The jallads had come for me and they seemed to hate me and my death… They pulled me by my hair… thorns shred my clothes and broke my skin.” But it turned out the jallads had made a mistake. “You were meant to bring Sachwant Kaur,” they were told. “They kicked me and I tumbled through the tunnel and came back here.”

Stories like these are the high point of First Hand, an anthology of non-fiction graphic narratives. As the volume’s co-editor Vidyun Sabhaney writes in her introduction, ‘The idea of non-fiction is not particularly novel in the medium of comics—in fact, it has a relationship with depicting the real that is as old… as its infamous association with superheroes.’ Besides the landmark Maus by Art Spiegelman, there is Marjane Satrapi’s richly imagined Persepolis, the journalism of Joe Sacco’s Palestine and Molly Crabapple’s illustrations on Syria. Orijit Sen, who has co-edited the anthology with Sabhaney, is one of India’s foremost graphic artists. His 1994 River of Stories is acknowledged as one of the earliest graphic novels to appear in the country. But interestingly, the anthology casts a wider net in its sourcing of stories, drawing from the work of researchers, journalists, filmmakers, designers, anthropologists and academicians.

So there are small gems of biographies, like Collage of Dreams by Smita Sen that documents the journey of an impoverished vegetable vendor named Shakila as she discovers the artist within herself. Filmmaker-animator Gitanjali Rao and writer Rajesh Devraj reimagine a chapter from the life of renowned singer and performer Begum Akhtar in the beautifully rendered Akhtari. There is also the fascinatingly glamorous world conjured in Whispers of a Wild Cat, by film studies scholar Madhuja Mukherjee, about the life of movie star Ruby Myers. Myers, who went by the screen name of Sulochana, represented the ‘exuberance of 1920s-1930s Bombay’. The star of films like Bombai ki Billi (1936) and Cinema ki Rani (1926) is just one of the many women who lit up Indian screens, a forgotten symbol of cosmopolitan imagination.

E-Waste Sutra tells the story of SiliVihar (short for Silicon Vihar) in east Delhi where old gadgets go to die. ‘It is a graveyard for thousands of tons of electronic waste. There are people making a living off this.’ Through detailed panels, we discover the links running from the discarded devices to workers in factory lines in China and mining activity across the world for the metals that build these phones and computers. ‘Who says this is an informal business? Sili Vihar is like a circuit board. Extremely logical and organized.’ Apocalypse by Akash Gaur is a whimsical collection of vignettes drawn from interviews with people talking about how they would save themselves on doomsday. “I have driven an auto most of my life,” says one, “And believe that at that moment too, I would be doing the same.”

Most of the stories have a link to the larger political and social questions that confront modern-day India. The anthology is perhaps inevitably uneven—there are some narratives that are less successful in their visual treatment. And some are let down by language, which occasionally sticks too close to a tone of research.

What the volume pulls off well is a recasting of our understanding of comics, placing it in the realm of the present. Perhaps the most masterfully crafted narrative is the collaboration between Orijit Sen and journalist Neha Dixit in a story titled The Girl Not from Madras. The story follows Sakina, a 17-year-old from Assam who is sold as a ‘bride’ to a family in Haryana. As her brother enlists the help of an NGO to rescue her, they are trailed by the familiar figure of a cape- wearing superhero. But this time the crusader is a woman named Laadli, the ‘Beloved Daughter’, who leads readers through the narrative to a resolution that is both heartening and heartbreaking— and hence, entirely real.