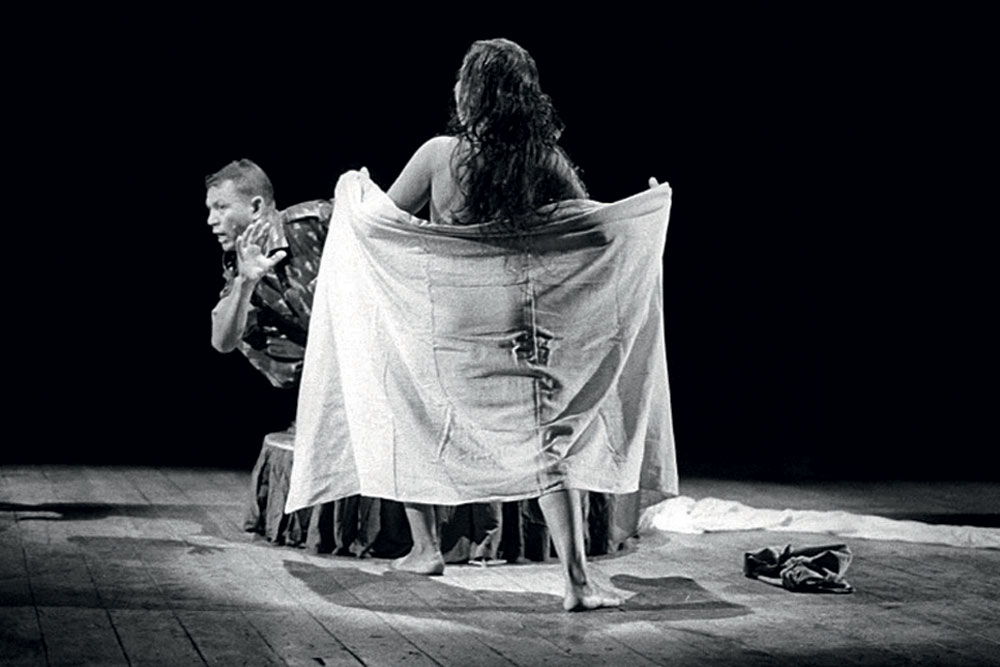 
I WONDER WHAT THE registrar of Delhi University thinks of the Mahabharata. “I don’t know if the name and context regarding the perpetrators got lost in translation but [‘Draupadi’] shows the Indian military in a very poor light. We don’t want our students to hate them based on fictional stories,” he said as he explained why Mahasweta Devi’s story ‘Draupadi’ was dropped from the Women’s Writing syllabus. How awkward it would be if our young people were always so easily persuaded by fiction that they learnt to be sceptical about the moral authority of their own elders and family members based on how Draupadi is treated in the Mahabharata, one of the most lauded texts of our culture.

Fierce Draupadi—born of fire with skin the colour of darkness, wife to five men whom she propels into a fratricidal war with their cousins to avenge her public humiliation—has never sat easily within the milieu that produced her. Unlike what happens with Sita, her more (seemingly) docile counterpart in the Ramayana, Draupadi is not elevated to the status of a goddess by the classical tradition. Nor do many people name their daughters after her. We could suggest that men find her seething rage and her steely determination disturbing, her lack of feminine virtues and pliability threatening. Women who hear her story as part of their larger cultural heritage are compelled by her—over the centuries, Draupadi’s story has been frequently retold by women. In our own time and place, writers such as Pratibha Ray (Yajnaseni: The Story of Draupadi), Chitra Banerjee Divakaruni (The Palace of Illusions) and Ira Mukhoty (Song of Draupadi), all of whom have reworked this remarkable woman’s story, come immediately to mind. They, too, seek reasons for Draupadi’s volatile temperament and unforgiving nature, they bestow upon her an unheeded anguish, the secret torment of loving one of her husbands more than the others, the fragility of having grown up without a mother’s love. They provide complex webs of motivations for her burning hate which destroys a ruling family that includes her own sons. Even women, who find much to admire in her, feel the need to ‘explain’ her, and in this, Draupadi resembles no one more than Medea, the princess in Greek mythology who killed her own children to punish her husband, Jason, who had taken a new wife.


But the Mahabharata itself, the story that created Draupadi, cannot entirely disguise its discomfort with the unusual situation of a polyandrous central character. Throughout the text and beyond, we hear a number of reasons why Draupadi has five husbands. For example, in a previous life, she performed great austerities so that Shiva would grant her a boon. When he appeared before her, she asked for a husband who was wise, handsome, noble, strong and a skilled archer. Since no one man could have all these virtues, Shiva promised her five husbands, each embodying one of the qualities she desired. In another version of this story, Draupadi was afraid that Shiva had not heard her request for a boon and so, she asked him for a good husband five times. Shiva was obliged to comply. Somehow, these stories are not enough. After her marriage to the Pandava princes, a new set of explanations is needed to negotiate the strictures of conjugality and respectability when we are presented with a woman who has five husbands. First, we hear that Kunti wanted her sons to be united and believed that a single wife would hold them together through the trials that lay ahead. Then, we are told that Draupadi would spend one year with each of her husbands exclusively, that each time she moved from one conjugal relationship to another, she would walk through fire and be purified. Nonetheless, despite these sleights of the writing hand, within the text, Draupadi’s unusual marriage is commented on frequently by other characters, allowing men, in particular, to slur her reputation as a good woman and a faithful wife.

By not interrogating Draupadi’s inner life (as others have done) and finding reasons for her personality and conduct, Mahasweta Devi thrusts this woman from the past into our contemporary world, forcing us to face its inequities and injustices

In the profoundly masculine universe of the Mahabharata, where a woman with five husbands could be multiply constrained, Draupadi speaks and acts in astonishing ways. The Mahabharata is filled with self-willed women who defy conventional behaviour and seek ways to empower themselves but Draupadi’s actions far exceed those of her mothers-in-law and her husbands’ other wives. Her defining moment is when she challenges her elders and the men in her family after she has been gambled away by one of her husbands, Yudhishthira. She is dragged by her hair into the Kaurava court, her garment is stained with menstrual blood, she is jeered at and called a slave and a whore. Fuelled by righteous indignation, Draupadi erupts in anger and she asks the men who have let this calamitous situation develop where dharma lies. She vows that she will bind her hair only after she has washed it in the blood that will flow from the chest of Dushasana, the man who assaulted her, when he is killed in the war. In the gruelling years of the forest exile that follow the dice game, Draupadi goads, scolds and threatens her husbands if they seem to waver in their focus to destroy the Kauravas. Draupadi speaks, questions, challenges, refuses to be merely acted upon. She wrests independence and a modicum of agency from the patriarchy that surrounds her. When the Pandavas begin their walk to heaven as their saga winds down, Draupadi is the first to slip and fall from the icy slopes of the mountain. Yudhishthira explains to Bhima that this is her punishment for not having loved her husbands equally, for favouring Arjuna, the left-handed archer, above all. Although the transgression that leads to Draupadi’s fall is related to her conjugal behaviour, it would not be out of place to ask what else Draupadi is being punished for.

DRAUPADI AND HER rage are powerfully manifest and more easily celebrated, though, in the folk beliefs and practices of southern India and among marginalised communities. In her story that Delhi University has chosen to eliminate from its syllabus, Mahasweta Devi transforms an instance of local veneration into a symbol of resistance. At the end of Mahasweta’s story, Dopdi Mejhen’s brutalised, bloodied nakedness in front of the Special Forces amplifies her namesake’s humiliation in the Kaurava court. The Adivasi woman’s ‘mangled breasts’ transfer all shame, all dishonour onto the men who raped and mutilated her. By not interrogating Draupadi’s inner life (as others have done) and finding reasons for her personality and conduct, Mahasweta thrusts this woman from the past into our contemporary world, forcing us to face its inequities and injustices. She does this by re-presenting not only the moment of Draupadi’s shocking abasement before the men of her family, but also the moment of her spirited defiance that challenges the civic and moral authority that chooses to remain silent in the face of such purposeful degradation. As Mahasweta lifts Dopdi’s moment of ‘shame’ to one of triumph, she also indicts the modern nation-state, this one in particular, which systematically reinforces and bolsters hierarchies of caste and gender. The problem with Mahasweta’s ‘Draupadi’ lies not in its ‘gruesome sexual content’ but in the uncomfortable truth it tells about the State that governs us.