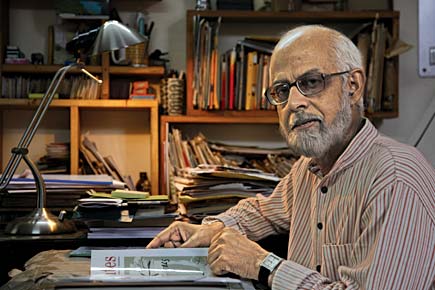 
By his own admission, the hunt for the Bengali Don Quixote was a “quixotic encounter”. SP Ganguly, professor of Spanish and Latin American Studies at Jawaharlal Nehru University, Delhi, is the man behind the newest reprint of the oldest translation of the Spanish novel in an Indian language. The Bengali version—an Indianised translation in 19th century Bengali—hit bookstores last week. And the decade-long story of how it happened is as crazy as the book itself.

“Right through my career, I wondered how Spain was seen by India,” Ganguly says, “There was a mention of Don Quixote by Tagore, but nothing more.” Ganguly combed the National Library, several of Kolkata’s oldest private collections, and many abroad. In the late 1990s, a lead pointed to a translation done in 1887 by one Bipin Behari Chakrabarti, a ‘bhadralok’ Bengali writer, possibly the first translator of the book in Bengali. The end of the tunnel was half-lit. However, the book was yet to be acquired. Though the trail was a strain, Ganguly was kept in the loop by friends in Kolkata. At 2 am one May night in 2004, a friend called to say the book was found—at an old lending library. Ganguly took the first train to Kolkata. “I found the only existing copy in tatters and around four chapters were missing,” recalls Ganguly. But Chakrabarti’s version was something.

For one, this book was called Adbhut Digbijoy (Strange Conquest). Quixote is called Kanti Ram (a Kshatriya Quixote); Quixote’s portly pal Sancho Panza is called Golok Chand; the love of Quixote’s imaginary life, Dulcinea, is named Kamala; Rocinante, the horse, though, retains his Spanish appellation. The story covers the adventures of the first three wars Quixote fights. Passages describing the action and setting are far removed from medieval Spain. They drool over bucolic Bengal.

For the missing chapters, which detailed aSancho’s early life, Ganguly devised a way out. He got Bengali translator Bitasahok Bhattacharjee of Jadavpur University to rewrite it in the Bengali of 19th century East Bengal.

But by the time the edition was ready, Ganguly got a call saying another copy of the 1887 translation had been found in Kolkata. And this one had all the pages. “The missing chapters made the back of the book. It tells the entire story of our lost-and-found experience. Readers have two different translations of one portion of the book.”

Then, something else happened. Ganguly gave a lecture on Spanish studies in Delhi in 2006. At the end of it, a Kashmiri man came to him with copies of Don Quixote translated into Sanskrit and Kashmiri by his grandfather in the 1930s. That text adorns the cover of the new Adbhut Digbijoy. Little would have Quixote known that one day, he’d be frothing in Bengali, between covers in Kashmiri and Sanskrit.