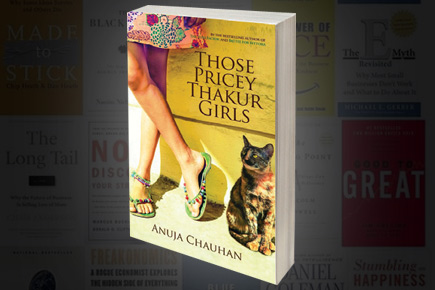 
Reading Anuja Chauhan is like watching a Hrishikesh Mukherjee film. There is a lot of romance, but of the chaste kind. Though the lead characters have plenty of run-ins, what they make of those moments is left to your imagination. Those Pricey Thakur Girls charms with its delicious love story—Chauhan’s strong suit.

The Zoya Factor, her first book, was all about falling in love with the Indian cricket team captain, who kisses you in the dark in the middle of a cricket field. Yummy. In Battle for Bittora, your toes curl imagining making out with a hot young politician in a white kurta while he fumbles with your cotton sari. In her latest, which could be her wittiest yet, the leading man is an idealistic journalist, with a hot name to boot, Dylan Singh Shekawat. The woman he falls madly in love with is Debjani Thakur, a strong-willed, witty, beautiful yet unaware-of-the-way-she-affects-men kind of girl. Their love story, along with the other mad-cap characters in their families, makes Those Pricey Thakur Girls a refreshing and engrossing read.

Yes, it’s the era of erotica. Anybody who reads popular fiction has to have read the Fifty Shades of Grey trilogy and the many spin-offs that followed. Why, even plain Jane Eyre was laid bare in her erotica avatar. I often struggle with writing sex scenes for my upcoming Mills & Boon romance. How does one make it sound hot and passionate, without it looking like a gimmick, or worse still, tacky?

Chauhan has no such problem—she steers right past the sex situation.

To Chauhan, “sex is in the brain and in the chemistry. I don’t feel the need to state the obvious. If he pushes her against the wall and kisses her, do I need to say what her body is feeling?” With Chauhan’s talent for making love seem both innocent and tantalising at the same time, going sexless doesn’t seem bad at all. Her love stories have an innate Bollywood character—there is a major conflict between the two leads, and the way they overcome it, thanks to their affection for each other, is played out simply and easily. “I like my characters to have opinions about something bigger in life,” Chauhan says. “That’s where the conflict arises from. They fall in love with each other and then learn from each other.” Though you don’t see them doing the nasty in full detail, the moments between them are delectable nonetheless.

She starts to say it’s Halo—because, excuse me, what other shampoo is available in this country—but before she can, he lowers his dark head and kisses her, very softly, on the place where her wet cotton kurti falls away to reveal the delicate skin at her collarbone.

Dylan is not just good looking, he is made of deeper stuff—arrogant to start with, but with a heart of gold. As for Debjani, you could be forgiven for thinking she is a take on the Elizabeth Bennett prototype, but she is originally Indian and that counts for a lot. Her heart is set on being a Doordarshan newsreader, an ideal profession for girls in the 1980s, when the book is set.

When the two Ds butt heads, which is often, you want it to go on forever. It’s surprising that Chauhan isn’t selling millions or known as the romance queen of India, because she’s so bloody good at it. “I am very okay with the rom-com tag. I don’t over-analyse it. In my head, I do write romances,” says Chauhan. She’s a girl’s girl and she lets us live out our fantasies—in a clean, innocent, we-are-Indian kind of way.

“Anji didi’s right, you know,” she says conversationally. “October is a good month. Not too hot, not too cold.”

“Just like you,” Dylan murmurs, his cheek against her hair as his hands slide smoothly up her back, beneath her shirt. “What are you doing?”

He smiles at her through spiky lashes, his gaze unfocused. She can feel his heart, it’s thudding hard and fast, obviously he still hasn’t got over that dive from the sixth floor.

“Checking for wings,” he murmurs as his lips graze her forehead. “I know you have wings. Don’t deny it—you hide them under your T-shirt and pretend to be a mere mortal like everybody else.”

Debjani wrinkles up her nose.

“But actually I’m a chicken?” she asks breathlessly even as she, very accommodatingly, lets him make an extremely thorough search…

“You really don’t know how to flirt.”

Move over Elizabeth and Darcy, Dylan and Debjani have just hit it out of the park.