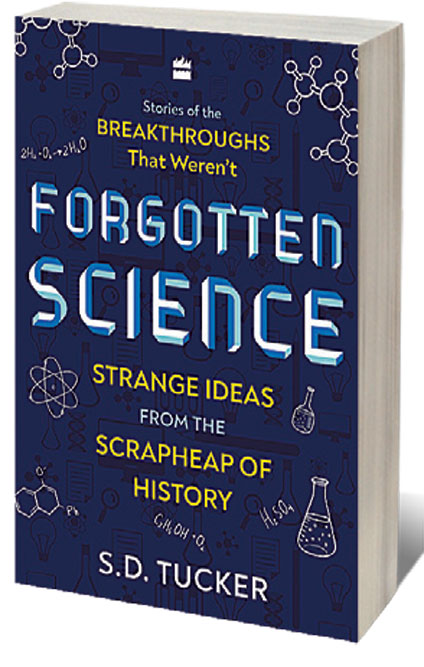 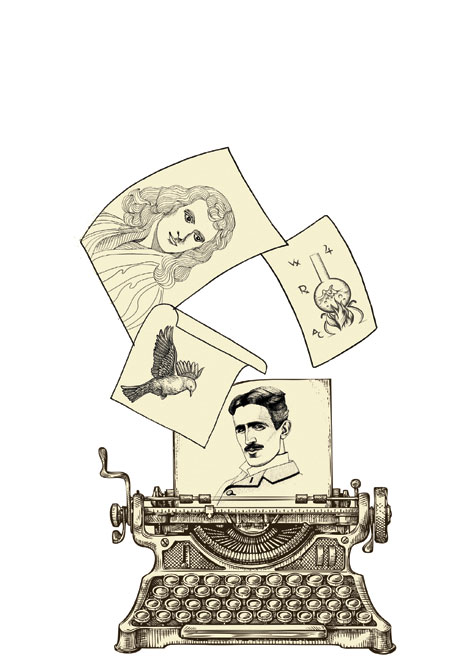 
IN FORGOTTEN SCIENCE dogs are injected with soup and apples are drugged with morphine. All in the name of research. In journalist and writer SD Tucker’s new book, science is tracked less as the apotheosis of human achievement and more as a catalogue of bizarre, unproductive and sometimes downright disturbing follies.

Penicillin wasn’t invented overnight, and evolution wasn’t discovered in a day. And yet, in textbooks and TED talks, science comes across as a neat chronological story, with few misadventures. Forgotten Science: Strange Ideas from the Scrapheap of History (HarperCollins; 320 pages; Rs 499) attempts to be a corrective to that. ‘Progress is not a straight line, in politics or in science, but there seems to be a general, unthinking acceptance in the West today that this is indeed the case, and that the two spheres go hand-in-hand with the other, on an upwards march towards ever-further happiness and enlightenment,’ says Tucker, in an email interview. ‘Science and society take a more zig-zag path, sometimes going forwards, sometimes backwards, it is not all one way.’

The book began as a byproduct of Tucker’s fascination for weirdos. He had already written about British oddballs in an earlier book and has a regular column about wacko politicians in the Fortean Times magazine, so he has something of a grasp on the field. ‘Many eccentrics have strange pseudoscientific ideas, proposing that the world might really be flat and so forth, and the book evolved from me wanting to look into such people in more depth,’ he says. “I’ve always had an interest in the philosophy surrounding science, as discussed in the books of people like Thomas Kuhn and Charles Fort, and have long viewed the field as not always being as objective as it is usually portrayed as being, so wanted to explore that issue further.”

The exploration highlights deadends and blind alleys that may or may not have contributed to science but are profoundly eye-opening and amusing in their own way. For instance, the widely pursued field of alchemy—attempting to convert various base metals to gold—while a dud in itself threw up tangential discoveries. These included new dyeing and tanning processes and the manufacture of substances such as gunpowder and cosmetics. ‘Mistakes are important, though, as at least they can tell us what does not work, which is often as valuable as knowing what does,’ he says. ‘Other misguided lines of inquiry are less important for what they teach us, and more simply enjoyable for their own sake, in terms of their entertainment value.’

Perhaps every scientific achievement has a few equal and opposite blunders. Newton, for instance, discovered gravity, but also believed in alchemy. Nikola Tesla discovered the alternating current but also fell in love with a pigeon that he claimed could shoot laser beams from its eyes. Thomas Beddoes helped us understand nitrous oxide, but tried to cure TB patients by making them sniff cow breaths.

So how do you appraise the legacy of geniuses who did morally ambivalent things or were simply cuckoo?

‘I think some of the weirder scientists’ legacies can be appreciated in psychological terms as much as practical ones,’ says Tucker. ‘People now talk about valuing ‘neurodiversity’ amongst the workforce, and I certainly think people like Tesla had that— although, of course, the line between a genuine mad genius like Tesla and a simply mad person like Strindberg can sometimes be a fine one, as I try to show in my book.’


Mistakes are important, at least they can tell us what does not work, which is often as valuable as knowing what does. Other misguided lines of inquiry are less important for what they teach us, and more simply enjoyable for their own sake, in terms of their entertainment value, says SD Tucker

HE’S REFERRING TO August Strindberg, the famous Swedish playwright, who also dabbled in ‘a bizarre form of laboratory-based occultism’. There are mad geniuses aplenty alongside bona fide quacks, hacks, cult leaders and pseudoscientists in the book. And there are several disturbing ethical breaches such as experiments on criminals and anatomical dissections as public spectacles. But Tucker doesn’t only depend on the shock-and-awe effect from some of the weirder predilections of man; he also looks at science’s deeper and more disappointing mistakes. The Nazis’ experiments on prisoners and Jewish people, for instance, included sterilising, vivisecting and bleeding them to answer research questions, while Stalinist Russia’s war on genetics as a ‘bourgeois pseudoscience’ compounded crop failure and mass starvation.

The specifics may change, and the agendas may vary, but science can never be free of politics, whether Nationalist Socialist or Stalinist or Hindu-right. ‘Science is always politicised to some degree, as it does not take place within a vacuum. Laboratories may seem like separate spheres from the outside world, but they are not,’ says Tucker. For a contemporary case, take climate change. ‘Whilst not denying the basic fact of climate change, the fact remains that the politics of the subject fit in nicely with the left-liberal leanings of most of today’s Western politicians, and several dissenting scientists have been treated unfairly for raising honest queries about the subject,’ he says. ‘Some on the left want climate change to be real, as it supports a narrative which undermines capitalism; some on the right want it to be fake for the precise same reason. Many political partisans make up their minds beforehand, then pick and choose which data best makes their case for them which, again, is the wrong way around. Science can never be entirely free of politics, any more than most other things can.’

Even if not explicitly influenced, any research will be contaminated by unconscious biases, the best-laid plans of scientists notwithstanding. “Every era has a different lens through which it is possible to view things, it is just that the lens is often invisible to those currently looking through it. We are all not only products of our times, but prisoners of them, and scientists are no different.’

Tucker’s book mostly focuses on European scientists, ranging from the 1500s to the 1900s. Over the centuries a few consistent areas of inquiry emerge. Can we live forever? Can dead people be brought back? Can we create utopias? For instance, the Russian Cosmist movement tried to catalogue every dead person so as to resurrect them later, while the Scottish chemist and doctor, Andrew Ure, dabbled in re-animating executed criminals.

‘The basic pattern in science’s more hubristic moments is precisely that identified by [philosopher] John Gray—to restore Heaven on Earth, this being a kind of sublimated religious impulse,’ says Tucker. ‘Science and religion are not always quite as opposed as is popularly said to be the case.’

With the gradual erosion of religion in the West, science has come to be imbued with its own infallibility. If a previous generation believed science could cure death, then isn’t it fair for the public to believe it can cure Covid-19?

‘Although science is imperfect and a work in progress, this is not necessarily the image of it given by certain propagandists in the media, so it is not too surprising the public can expect too much of it,’ he says. ‘The word ‘science’ sometimes functions almost as a magic word; wave it in front of people’s eyes and many will often just accept anything done in its name.’ Take the pandemic, for instance, and the breathless tracking of possible vaccines or cures, and governments’ attempts to defer to science. ‘Politicians often say they are making decisions about lockdowns and so forth based upon ‘the’ science, but [Covid-19] is a new disease which isn’t anything like fully understood yet. The models about infection rates produced by epidemiologists are more like educated guesses than examples of absolute certainty… and when the data is obviously incomplete, you end up with highly imperfect results. But politicians can pretend otherwise and use this as cover for what are actually somewhat subjective decisions about which specific policy paths to pursue.’

Newton discovered gravity, but also believed in alchemy. Nikola Tesla discovered the alternating current but also fell in live with a pigeon

This is partly because of the patina of legitimacy that science confers. But ultimately, it indulges in a mythmaking of its own kind. ‘I don’t mean that it is a myth per se, as obviously it deals with any number of actual, non-subjective facts—on a simple level, things like the world being round and orbiting the sun, etcetera,’ he says. ‘I just mean that myths can then be overlaid on top of these basic facts, sometimes by scientists themselves, sometimes by outsiders. In a wider sense, the practice of science itself functions to some degree as a myth as it is stereotypically supposed to be completely objective and impersonal in nature, yet this is not always the case—science is a human activity, pursued by humans, and scientists sometimes do read their own desires into data, or are guided into looking into or neglecting certain areas of research by their own tastes and prejudices.’

Much of what Tucker describes—the bloodier and more brazen experimentation—would be inconceivable today. Scientists no longer transplant heads on to dogs or do funny things to farm animals, and they certainly would not use certain ethnic groups as guinea pigs. But we still conduct animal experiments so ethically speaking, where are we, vis a vis our predecessors? ‘In some senses, there might actually be too many ethical safeguards in certain respects,’ says Tucker. ‘Attempts to create a coronavirus vaccine will undoubtedly be delayed by legally necessary attempts to ensure that it is safe for humans. That’s not a bad thing, obviously, but in the past someone like Edward Jenner [who developed the concept of vaccination] could simply inject a handy nearby farmboy with cowpox and see what happened. Nowadays, he would be immediately prosecuted! And yet, by taking such a risk, he actually ended up saving innumerable lives by risking that of the farmboy.’

The lone mavericks or the solo artists fiddling with test tubes and forceps are now a matter of history. Science today is institutionalised, done in universities and under careful regulations. Perhaps there is a modicum of loss in that shift. ‘Many total amateurs made valuable contributions to science in the past, but this seems less possible now,’ says Tucker. ‘Experiments can be expensive to pursue, and so grant applications need to be made—but, very often, the people in charge of the purse strings will only provide the cash if they can see financial reward at the end of it. This is unfortunate, as some seemingly useless paths of research can end up having useful practical applications.’