The first woman to hold the Oxford chair in Poetry and the great-great-great-grand daughter of Charles Darwin, Ruth Padel knows a thing or two about survival. 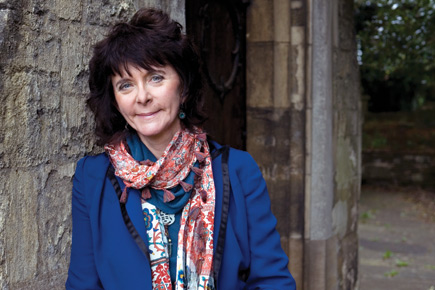 
The bay window of our hangout, behind Bangalore’s famous Koshy’s Café, heralds an afternoon that’s a midpoint between winter and summer. The scene outside is a landscape of listlessness. Traffic is soporific; beggars move like earthworms; and the tea on your table is arriving from Assam. In short, it’s a moment demanding something that can jolt you out of stupor. And then someone says something. Stop.

On my isosceles triangle table are women, two of whom I’ve decided to get the numbers of. At one point, parting that triangle, is a bespectacled woman with a hairstyle like the forests she may have combed over the years. “Show,” she says to the green-topped beauty, “not tell.” “If you’re creating a character, you need to show character.”

To illustrate, she takes the cup of sugar near her. “For example, if you have to express something very uncertain about a certain Mr William. You say, ‘Mr William took the cup of sugar and made a little circle with the spoon before pouring some in his coffee.’ That says a lot about the person and character, than saying whatever you say directly. Writing in an active sense and displaying it in specifics adds character to the piece.”

Later, I discern that poet and writer Ruth Padel, who was in her element conducting a small writing workshop at the table, knows a thing or two about character. Character, in the other sense of the term. The word you invoke when the world is your enemy and you fight it to the finish.

In Bangalore on a British Council Darwin Now grant and in association with Toto Foundation for the Arts, she had already whetted the poetic appetites of readers by reciting from her latest collection, Darwin: A Life in Poems. The collection is an imaginative verse-biography of her great-great-great-grandfather. In these poems, Padel revisits what Darwin’s daily life and his journeys may have been. Indeed, one of the foci that emerge is that of the relationship between poetry and science, and the science within poetry.

“Darwin was quite expansive in his interests. His letters to his wife, colleagues and friends are humorous and amusing. He was always up for a laugh—at others and himself. The interaction between religion and science is a tension that played out in his life,” she explains. What was her intention behind this collection, I ask? “There are tomes written on him. But I wanted to imagine and bring him to life in ways he hasn’t been before. It’s a discovery about his life and travels,” she says.

In the process, it has also meant marrying things Padel herself holds close to her heart—both science and poetry. A cursory look at her life can only startle you. She has eight collections of verse, including this one; has written a critically acclaimed book-length essay on poetry, 52 Ways of Looking at a Poem; a book of travelogue; and poetry on tiger conservation. One book has linked the sex appeal of rock musicians to that of Greek gods. As an academic, she holds a PhD from Oxford on Greek drama, which she has taught in Greece and Buenos Aires. Then there’s the small thing of having sung in an Istanbul pub.

The early part of her life was as an academic and she also spent a huge portion of her life in the Greek island of Crete. She’s now at work on a novel set in India which circles around the king cobra. By turns, her work has produced uncertain and unsettling moments of insight. Like Ted Hughes, nature is the canvas for her words to paint images on. And nature, as readers acquainted with her work and her ancestor will acknowledge, can be brutal and beautiful. Sometimes, both at the same time.

But in the context of her immediate past, Padel’s current work seems the creative mind’s hit-back against the social world. She wouldn’t have it that way, though. On a good day, she can write up to seven hours at a stretch, without stirring much out of her study. Of late, she may have had good reason to.

Last May, she had fended off competition from leading nominee Nobel-winning Caribbean poet Sir Derek Walcott and veteran Indian versifier and critic Arvind Krishna Mehrotra to become the first woman to occupy the chair of Professor of Poetry at Oxford University. Walcott, on his part, had withdrawn his nomination after reports of his alleged sexual harassment of students in America surfaced via a booklet published on him called The Lecherous Professor. Padel had then said her victory had been marred by the skulduggery of a campaign against her rival. She denied any involvement, and dismissed allegations of collusion with a friend and newspaper columnist to highlight Walcott’s past as “ridiculous”. But she did happen to send two emails to British journalists, although these didn’t lead to Walcott’s withdrawal. In the smear campaign that followed, nearly 10 days after she got the Chair, Padel resigned. What happened?

“I made a mistake by writing those emails,” she says. “But that’s life, you learn from mistakes.” But why did she have to quit? “Never did I know that a university chair could be so politicised. And I’m better off just working. I plunged myself into work after everything that happened at Oxford,” she says.

What plans did she have for that position? “I wanted poetry to enter all corners of Oxford. We live in times of such standardisation and specialisation that we forget how close disciplines are to each other. I wanted to get science students interested in poetry and there are fun ways of making that happen,” she laments. Questions on Sir Walcott get no answers. Didn’t she want to take legal action against the newspapers? “Why? It’s not worth it,” she grunts.

In the meantime, Padel finished her Darwin collection, is finishing her novel set in India and is due to come out with a selection of Sir Walter Raleigh’s poems edited by her. For everything that she underwent, it’s a very literary, character-filled rebuttal, a survival act, I point out. “I suppose, a writer writes always,” she chirps, before adding, “and be lucky enough to stay in India, see forests, tigers and snakes.”